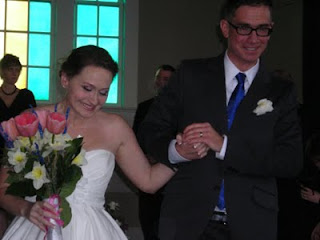 That headline is courtesy of Jeffry Poso, The Helm drummer and smooth dude extraordinaire. So as you can see from the photo, my man Bob Swift (he's the one on the right) got married. He's the tall glass of water that shouts for that band The Helm that three of you are familiar with and whose records I put out.
It seems lately that I'm putting up more posts of people whom I've released records for getting hitched than actual announcements about records I'm releasing. And I'm OK with that. This label has always been about helping my friends out and doing cool things with/for them, and weddings are also cool things (especially when they last!) so it's fitting that I post about it I think.
So with that I just wanted to give a hearty congratulations and was stoked to be a part of the shindig, and also spend some quality time in the Northwest!
Posted by Hex Records at 6:55 PM No comments:

Yo! So I'm super busy with a million things and I wanted to try and get them into a concise little paragraph for you all while I have the time.
OK, first and foremost- I'll be gone all next week in the great town of Seattle. Why? Because the one and only Bob Swift (from The Helm) is getting married, by gum. Congrats to him! Yours truly is in the wedding party so it will no doubt be limos and many vegan cheese platters, right? So that means no updates for a bit.
Second- the OAK & BONE lp is done. yup, mastering went down last night and it's ready to be sent to press. Expect a new jam to be posted online once I return. I don't think the internet can handle the heaviness.
Third- LIKE WOLVES lp will also be going to press right about now as well. Sit tight.

So that means, finally, pre-orders and stuff will be happening soon. I'm thinking of some wacky package deals for this one, so keep checking back. I'll probably get pre-orders going around mid-May.
The official release dates for both records are July 12th, but mailorder will more than likely go out a few weeks ahead of that.

So that's that.
To stave you off til then, here's a bunch of reviews of records and stuff I've checked as of late. 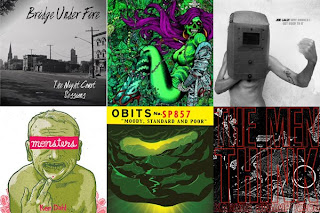 BRIDGE UNDER FIRE, “The Night Court Sessions” ep
Local dudes make good with this new band that sprang up out of nowhere. I have to say, it really has a strong Hot Water Music vibe to it. I mean really a very similar vibe. Of course, there’s nothing wrong with that, they do it well. Ya know the drill- gruff and melodic punk, but leaning more on an overall ‘rock’ vibe more than anything, and plenty of goofy song titles to go around (take, for example, “Midnight In the Olive Garden Of Good and Evil”). It’s melodic, fun, hits hard, and in the right spot. I can get down with that. (Bridge Under Fire)

JESUIT, discography
This came out awesome. Jesuit were easily one of the meanest bands around on stage- constantly belittling their audience with between-song shit talk, punishing their ears with horrid squalls of noise, not giving a rat’s ass if people liked them or not, and let’s not forget doing something musically that wasn’t too common at the time. I certainly was a fan and got to see them on many occasions. But I will definitely admit that they made me quite uncomfortable on a few occasions, what with all the berating and all. I eventually came to find they were awesome dudes when not on stage, which doesn’t really matter since we’re talking about the band here. So yeah, while not prolific (this discography has the two seven inches, a couple comp tracks, a Black Sabbath cover, and a few demo songs) Jesuit dealt a threatening whallop to late 90’s hardcore that was equal parts Eyehategod feedback-noise-sludge worship, bad ass blunt force hammering, and a dash of powerviolence. Their original recordings didn’t always get the justice they dealt out live, so Kurt Ballou came in to remaster this stuff and it sounds great. A kick ass package with all new artwork and a ton of stories and photos about the band round it out. Seriously, get this. Your ears will cry for help but your reptile brain will thank you. (Magic Bullet)

LALLY, JOE, “Why Should I Get Used To It?”
Admittedly, this is the first time I’ve heard Joe Lally’s solo material. This is already his third record. The dude stays productive, that’s for sure. As the bassist for Fugazi Joe laid down some of the best bass lines in all of punk music. He never got too showy, he always played what the song called for, but he was so present in all of their music as the component that got butts moving. I totally dig his style. So as a solo musician it appears he is writing most everything, but does have a couple people backing him to make it a full band. Musically, he does keep it fairly simple, even though these feel like full songs. There is a weird, sort of eerie vibe going on through many of these tracks, but I can’t quite explain how. I’m reminded of another rather short-lived Dischord band from not too long ago when listening to this called Antelope simply because both bands do a great deal with simplicity in the songs and make them sound quite full. There is also this sort of post-punk, new wave kind of thing happening here and there akin to fellow DC group Trans Am, minus synth. It’s hard to describe what’s going here, which is good because it means it’s original. Nevertheless, I like it and you ought to give it a shot as well. (Dischord)

THE MEN, “Think” b/w “Gates Of Steel” 7”
I really don’t get this new trend of bands purposefully recording themselves to sound like absolute shit. You know how easy and cheap it is to record these days and sound at least halfway decent? The days of setting up a boombox in a practice room, pressing record, and hoping for the best really are over. And there’s this crop of bands springing up that seem to completely miss the boat on this. And they’re mostly good bands too! The Men, for example, are doing some cool things. Imagine My Bloody Valentine as a raging punk band. That’s kind of what’s happening here. I can only imagine live them blowing my goddamn ears out. This short 7” focuses more on the raging style and not so much the huge walls of noise they have displayed on other records. Oh, and they cover one of my favorite Devo songs ever too. But yeah, the whole affair sounds like it was recorded at a basement show or something... gotta work on that. (Karmic Swamp Records)

MIXTAPES, “A Short Collection Of Short Songs” 7”
Fuck, this band is just too happy. Seriously, I’m all for good moods. But punk (no matter how shallow this group flecks at the surface at that term) should have some degree of grit to them. This has absolutely no grit. It’s just happy pop music, happy girl vocals, happy little piano parts, and taking up a happy little corner at Gainesville Fest for people who just want to sit in the sun... ok, that doesn’t sound half bad. but it’s really just not for me at all. (Animal Style Records)

MONSTERS, by Ken Dahl
So I was in NYC for a show and it turns out the MOCCA festival was also happening. I’d been trying to hit this thing up for a few years now and miss it every year. But I dropped my plan of going to a museum and hit this up instead. What is it? Well, just basically the East Coast version of San Diego Comic Con, but for strictly indie comics only... which is, essentially, all I read these days. While there I noticed the newest book from Ken Dahl, and the man himself selling it. I was a big fan of his previous collection, which Microcosm released, and this new book is one big story, instead of many random ones. Ken not only has a quirky illustration style, but a great sense of humor and storytelling. I can only describe it as being grim depression that somehow is very hilarious as well. he typically mixes the ultra-personal and embarrassing to the point that it becomes quite funny. So this book deals with a long spell in which he thought he had herpes- all the terrible social encounters that came with it, the stigma of having it, and the resulting sad state of a personal life that left the dude pretty desperate for some time. Yeah, sounds strange and bleak... which it is. but it really comes off as a great and funny story. I thoroughly dig this and the dudes work. Check it out for shits and giggles (Secret Acres)

OBITS, “Moody, Standard, and Poor”
I’ve been waiting for this one basically since their first full length came out. I was so impressed with what these Brooklyn cats were doing, being a long time fan of basically anything Rick Froberg dips his creative pen into. “I Blame You”, the first LP, was an excellent collection of tunes. This new one... well... basically keeps things moving. I wouldn’t really say there is any serious development, just more Obits songs. That may sound bad, but when you already write great songs how can you really improve on them? This continues in the garage-y, but refined style they’re known for, along with Rick’s very distinctive voice and guitar work which falls somewhere between the loose punk-leaning style of his previous outfit Hot Snakes, and something classic rock sounding... like CCR. And I dig the shit out of that. Some of the standout here include the catchy melody of “No Fly List”, the quick urgency of “Killer”, and the hook in “I Want Results”. Once again, Froberg handles all art duties with a beautiful cover, but the interior is lacking a bit, it’s super simple design makes me wish for another bizarre pen and ink illustration he is well known for. (Sub Pop)

TIN HORN PRAYER, “Get Busy Dying”
Plan-It-X rejects? Ghost Mice-This Bike Is a Pipe Cleaner-Bat Shit- trainhopper punx? I have no idea. It’s somewhere along that blurred line of hippie crust panhandler and legitimate Americana type campfire songs. I can’t say it’s really my thing at all, but dudes with banjo, mandolin, harmonica, and your other regular rock band set up get down with some rock n’ twang. I’m thinking a bit of Scouts Honor, a a dash of Rev. Peyton’s Big Damn Band, and the aforementioned Plan-It-X stuff by gruff fellows drinking whiskey by a fire. Not too bad of a debut, but not my cup of tea. (Bermuda Mohawk Productions)
Posted by Hex Records at 8:00 PM No comments: