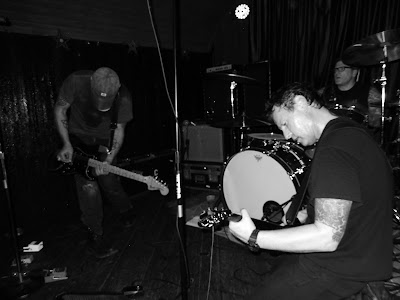 So I like to visit Philly…  a lot.  It’s a quicker drive for me than going to New York, and a lot less hassle.  Plus there’s a crazy amount of good bands, good venues, good eats, and good people comparable to my home states largest city.  Philly is still a big city, but it has a small town feel because everyone knows everyone else, the bands work jobs for other band people at small punk-run businesses, and they all take turns calling in so they can go on tour.  It’s the type of place I like.  But that toll on the Turnpike is getting a little out of hand, so can you Pennsyltuckians do something about that?
This particular trip was both long-planned and short notice.  The date was announced a couple months back, but my natural trepidation of travelling anywhere outside my neighborhood in late February was warranted, seeing as that is typically the time that blinding snowstorms blitzkrieg the Northeast and it is not uncommon to be under a two-foot thick blanket of crusty white snow.  I wanted to go, but wasn’t sure if I (or my car) could hack it.
Fortunately, the noise rock gods granted safe passage as it was a balmy 50 degrees (yeah, that’s very warm for this time of year) on this pleasant Saturday.  I coasted into town with time to spare so I got some pizza with a moderately drunk friend and then shagged ass over to Kung Fu Necktie to get my ears sandblasted off.
I dig this venue.  It’s a pretty small spot, packed pretty tight, and the stage is small.  So imagine my excitement knowing I’d be spitting distance from seeing two of my favorite noisemongering riff monsters trading riffs together on that tiny-ass stage in a couple short hours.
Humanshapes got on first.  I had checked their music out online ahead of time and was sufficiently satisfied with their weird and scrappy noisenik leanings.  Bizarre, ugly, occasionally heavy would best describe the offering.  Yet seeing them live was a different story.  The loud was louder, the heavy heavier, the sense of panicked dread and cold sweats coming through their frayed guitars washing over those in attendance.  Needless to say, I was quite impressed.  After their frontman made a mess of knocking over the mic stand and being sucked into the audience they wrapped up their brief stint and made way for what was next. 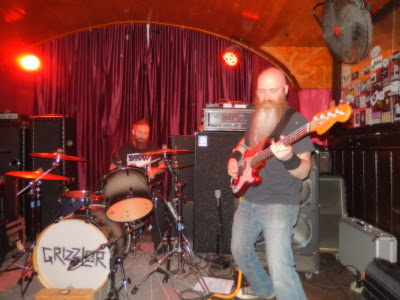 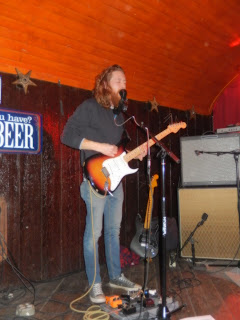 The homies in Grizzlor stepped up with a new bassist and a beefier sound overall.  For a band steeped in squalling noise, manic vocalizations that sound like they emerge from a cavernous panic room, and a sound so sludgy the La Brea tar pits called up to admit that they were jealous the three bearded gents in Grizzlor have their sound down incredibly tight.  The chaos is controlled, the songs are short, and the riffs are mighty.  Simply put, after their set all clean shaven, and otherwise hairless attendees, were now sporting full beards.
Ok, so UXO got up.  I realize the idea of a ‘supergroup’ is often disappointing when put into practice.  But there’s really no way that pairing Chris Spencer from Unsane and Steve Austin from Today Is the Day could result in anything bad.  Both bands have created some of the meanest, most spiteful, and harrowing music I’ve ever heard and their styles of playing complement one another extremely well.  But both guitarists got up there and did what they do so well, backed by a terrific rhythm section.  Though this was only the band’s second show they sounded like they all had been playing together for years.  It was truly a treat to witness, a special event that could potentially just do the one album, play a few shows, and then call it a day.  Still, they played through their whole album, as well as two songs not on the record, which makes me hope that there could be more in store in the future. 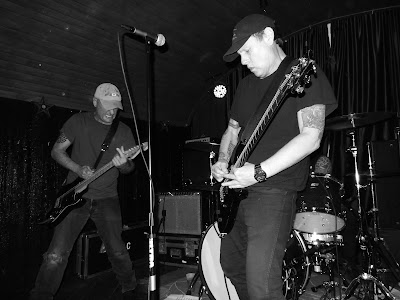 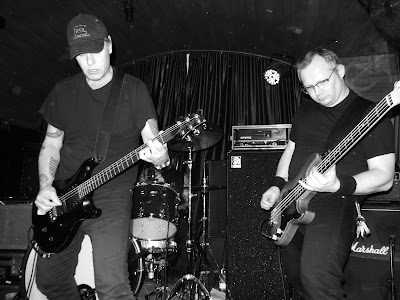 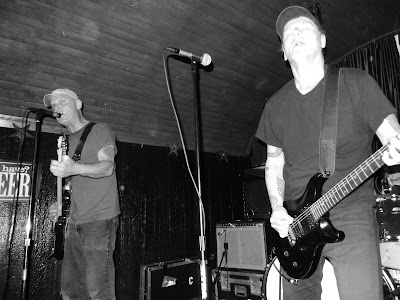 Fight Amp closed things out and it’s very nice to see them getting a great deal of love from their home, which they have been crushing for over a decade.  They were the only band I actively witnessed people losing their collective shit to and created quite the ruckus.  I’ve seen Fight Amp a bunch of times and they never fail to excel at abrasiveness.  For their set I hung back and took it all in from a vantage point where my ears would no longer be subject to deafening distortion, as the rest of the night I’d been pretty much standing directly in front of amplifiers.
Generally, after a show like this I’m worn down by ringing ears from standing too close to the stage and a hoarse throat from trying to hold conversations between bands.  But somehow I walked out of the show completely at ease with the world, and beaming at the sonic beating I just took.  And I was basically ready to do it all again.
Posted by Hex Records at 8:44 PM No comments: