Let the reviews bloom.  Oh, does that sound stupid?  Well, I guess it sort of is.  Who cares.  This is the part of the year where I tend to get up and leave town for shows only to drive back the same night and go to work in the morning.  Everything happens aright around now, which is why I'm actually surprised that I have the time to post some of this stuff up.  Either way, just look at the review picture- a lot of black and white looking releases here.  What's up with that?  It should be all green and flowery to reflect the season.  Get with it entertainment industry...  geez. 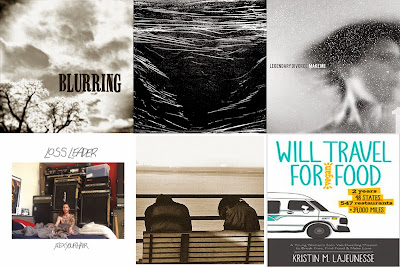 BLURRING cd
The hypnotic whirlwind blast of blazing grind and inter-dimensional guitar work on this debut full-length from Rochester’s senior citizens department of aggressive music is nothing short of an exercise in futility trying to figure out everything they’re laying down.  It may lead to nausea, a headache, or frustration…  or all of the above.  They laid down a 7” a bit ago that put forth some Discordance Axis-ian space grind, spit out and done with before you could say ‘wow’.  This puts forth some lengthier songs and I, for one, have always preferred my grind (what few bands in the genre I actively listen to) to be kind of short, unless they’re throwing in really catchy riffs to go with it.  This offers no such pleasantries.  Blurring throw one inhumanly aggressive passage after another at you with no regard to your notions of what a ‘catchy’ song should sound like.  I have to admit, it’s a bit overwhelming for me.  The players on this record though, whoh man, what a lineup.  Just hearing them do their thing is reason enough to at least check it out.  (Handshake Inc)

GREAT FALLS, “The Fever Shed”
While this isn’t officially out yet it’s worth laying down text for what will easily be a favorite by year’s end.  Great Falls are familiar dudes from Seattle doing familiar things that they have done in past bands (Nineironspitfire, Kiss It Goodbye, Hemingway, Playing Enemy), and always doing it really well.  The pain is so real and scathing in each tortured and twisted riff, each shrieking scream and bellow, and the angular and distorted music just pushes it that much farther.  This is metallic noise rock that doesn’t so much clobber as it takes wild stabs in the dark from a tortured but brilliant criminal mind.  Like their last LP they mix in a few songs that are short bursts of frenzied intensity and knotted-knuckle blitzes and a couple sludgy, dragging burners that extend for quite awhile.  It’s all perfectly OK with me.  I sometimes think I’m one of the only people who still likes twisted noisecore like this, but I don’t really care because I know it’s honest and mean-as-hell music…  even if the three guys in this band are all really nice guys.  You ain’t foolin’ no one with your quaint and hip, cozy Seattle life!  (Init Records)

INTERCOURSE demo
Sounds like Swiz playing noise rock with some unnecessary noodly parts in a shitty garage.  There are some nods towards The Jesus Lizard sense of rocking your face off and being complex, but this band hasn’t quite nailed that yet.  You also get a large dose of really weird, sometimes sketchy, lyrics being thrown about, and a tie-dye cover for an all-out assault of weirdness.  I’m half on board, half still on the dock because I’m pretty sure I saw dynamite on the boat.  (Eye Tape Records)

JOHNS, “Grift Marks”
A weird combination of dark and moody overtones to otherwise catchy and well-constructed garage rock.  While much of this records retains a nice sort of post-punk melody to it songs like, “The Blurry Tongue” tread and stomp with a sort of cruel nursery rhyme quality to the lyrics, and “Here Comes the Snake” has a strong Young Widows feel to it.  I guess you could say pieces of bands like The Birthday Party come to mind, if they were a little less unnerving.  Honestly, I’ve never quite heard a band throw together these fairly disparate elements, but they seem to make sense all going together in an odd way.  The more I listen to it the more I enjoy it.  (Peterwalkee Records)

LEGENDARY DIVORCE, “Make Me” CDEP
I hate my own comparison here, but vocally this has strong ties to Hole and the sort of messy rock they championed in the mid-90s.  I was never a fan of that band, but there’s a legit howl here that can be soothing and drunkenly raspy/mean at the same time.  It mixes well with music from a cast of characters that has made music together for years under the monikers Inkling, Minor Times, and Ladder Devils.  So yeah, take the calculated math-riffing of those bands and give it a garage-y noise rock punch in the gut and you get the debut from Legendary Divorce.  For a band together a very short time, and kicking out a handful of jams this is pretty good.  (Reptilian)

LOSS LEADER, “Flex Your Hair” 7”
“Suplex”-era KARP meets The Ramones on their shittiest/catchiest day in a riff arena, with Pat from Self Defense Family yelling garbage over the mic.  Some nice singing vocals spread on top of it all like butter on a crusty ‘ol hunk of bread.  Two songs on this quick little single and I hope to whatever deity you pray to that “Stickman” is about the guy from Fury Of Five… because how wacky would that be?  Give this a try, you could easily do worse.  (Anybody’s Flowers)

METZ, “II”
Did you like Metz before?  This is the same, or slightly better, version of what you got before.  In other words, it’s fucking fantastic.  One can tell they spent a little more time working on catchy choruses (to the degree that scratchy wailing over walls of noise and rumbling riffing can be described as ‘catchy’), and pummeling the listener as effectively as possible with bigger riffs, more repetition, and a couple slower songs that burn you down.  When people affectionately refer to bands having a ‘90’s sound’ and applying a ‘grunge’ tag-on to it I’m usually game and Metz most certainly fits that mold…  in a way.  Since I lived through that I can easily say that, sure, Metz takes cues from all that.  But they’re better.  Way better.  Their presentation is wild and erratic, but grounded in a bludgeoning rhythm, and their volume is crushing.  That may sound like a description of a metal band, but this is purely deafening punk rock.  One of the best (and loudest) live bands I’ve seen in recent memory. (Sub Pop)

THROAT CULTURE demo CD
A mid-to-late 90’s relapse to hundreds of bands taking post-hardcore and groove-oriented riff hardcore and somehow making their own thing out of it.  Like bands that maybe were once thuggish and showed a soft side that still rocked.  At the time I got kind of tired of it quick, but given the passage of nearly 20 years it’s kind of a welcome return and I can roll with it.  Somewhere these guys are waiting for a VFW meeting to end so they can play to 20 kids packed in a small room that reeks of cigarettes, cheap plywood, and stained floor tiles. (self-released)

TYRANNY IS TYRANNY, “The Rise Of Disaster Capitalism”
Don’t toy with my emotions.  When a band describes themselves as noise rock akin to AmRep bands and Unwound I’m all in.  When the result of what I hear sounds like the leftovers of the Neur-Isis tidal wave that swallowed entire scenes before being cast off in favor of 70’s stoner rock I’m a little bitter.  There are moments of Majority Rule-esque grand build-ups and screaming downfalls, all wrapped around dissertation papers rife with Zinn and Klein ideals.  All of that is a good thing.  Heck, I used this band’s moniker in lyrics for my old band, so ya know, I feel ya.  But let’s be honest with the music and not tread on sacred ground, shall we? (Phratry)

WILL TRAVEL FOR VEGAN FOOD, by Kristin Lajeunesse
I like to travel.  And I like to travel to eat vegan food.  This book naturally appeals to me.  The author spoke at a vegfest I went to a couple years back, before this book became reality, and it was there that I first heard of her project of dropping out of life with fork in hand, and decided to do a road trip across the United States and eat at every vegan restaurant in the country.  I was pretty hooked after that because, well, like I said, I love vegan food and travelling.  Yet this book is more than just a tale of road tolls followed by pictures of fancy meals.  There’s quite a bit of back story of growing up, getting tattooed, shitting in a bag when you live in a van, and plenty of getting it on (sometimes in a van).  And, as a side note, can I add that as someone who writes a lot- and often to the general public- it always seems awkward to write about romance, especially when you know your parents may be reading it.  I’ve never comfortably gotten around that, and does the author ever encounter those sorts of awkward conversations later on?  Imagine being at Thanksgiving dinner and your weird uncle asking, ‘how’s the shaggin’ wagon, kiddo?’  Just, yeah…  odd.  All that notwithstanding, this is a quick read because if you’re like me travel stories fly by and reading about places you’ve been, or eaten, and reliving those accounts through the eyes (and palettes) of someone else is always fun.  Plus, now I have like a million more places I want to eat the next time I travel to all these places that I clearly missed out on in my previous travels.  (Vegan Publishers)
Posted by Hex Records at 11:25 AM