Well, well, well, so reviews return! It's been some time, I know. What with all the holiday hoopla, and post-holiday 'shotgun-in-mouth' blues (or is it the other way around?), there just seems to be no time to do all this stuff. Either way, while the entire civilized world remains buried under what appears to be a new ice age, you may as well get up to speed with what's on record/book shelves lately and read this stuff. 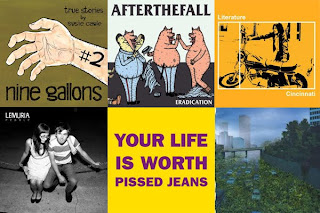 1994, “Fukyrhed” 12”
My first listen of this made me want to throw this LP at oncoming traffic. Super noodly Capn’ Jazz type bands infuriate me. Upon second listen I found some respectable points to this EP- mostly really impressive drumming. Yeah, it’s kind of over the top in a not that great sort of way. But when this dude finds the pocket he sure can beat the shit out of it. But yeah, techy, noodly whineypants stuff... overall, no thanks. (Inkblot, Square Of Opposition)

AFTERTHEFALL, “Eradication”
This band sounds so much like Propaghandi it’s not even funny. OK, maybe less guitar solos, but still a dead ringer for the Canadian political punk powerhouse. And I’ll be honest, I have never really been into Propaghandi, or any of the more fast, politically-oriented melodic punk bands. It’s simply not my thing. I’m down with their politics, and I dig the Black Flag-inspired artwork, and for this style this is done well. But it’s not what I listen to. These dudes have been at it for quite some time so it is nice to see them get some recognition. The respect is there, but my taste is not. (Mightier Than Sword)

ANTILLECTUAL, “Start From Scratch”
Much like the record I just reviewed before this Antillectual play very fast and very melodic singing political punk. Again, this sort of thing is what I have admiration for on a lyrical front, but everything else is just not my bag. This could be on the radio for how clean and polished it sounds, and honestly, I dislike it quite a bit. That’s not some pink purist frame of mind, it’s really just because I don’t like music like this. SoCal Fat Wreck fans and AFI types will probably dig this. but not I. (Shield Recordings, Square Of Opposition)

CASTING CURSES, 'Cold All Over Again" 7"
C.C. is a sort of on-again, off-again group from different parts of New York that have already made a number of recordings in the last few years. Their sound has progressively become more and more of a sort of late 90's post-hardcore direction, yet it overall remains grounded in chunky hardcore chugging. The flourishes of various guitar effects and melodies shake it up and make for an overall fun listen. The artwork on this release is incredible. (Panic Records)

FISHERKING, “Forget It” CDEP
So what I cannot fathom for the life of me is how the press release for this record was stating that they think this record sounds like Jesus Lizard or AmRep bands. Were they listening to the same band I was? Did I get the wrong CD? There is absolutely NOTHING here that sounds anything like that. The first half of this EP is bland and generic melodic hardcore. Nothing bad, but also nothing that stands out from the norm. The last couple songs have more of a late 80’s NYHC crossover vibe going on that seems a bit more adventurous and mean. While those songs are also not terribly original they have a nice little bite to them. So that’s what you get here. I’m not sure what that press stuff was all about. (Bermuda Mohawk Productions)

LEMURIA, “Pebble”
Godamn. They just know how to get it right. This LP is fucking great. First thing this year to kick my butt. Moving even farther away from a pop-punk tag Lemuria just wrote a bunch of good songs. I think I dig the A-side more , but the B-side has got those super catchy lines like, “I could always do a little better” and “The man who is half of me”. I’m going to be humming this stuff all year. But the A-side has “Wise people”, perhaps the best track on here with it’s slightly-off and rumbling groove throughout... and those awesome bells in the chorus. It’s a great little touch. “Pleaser” and “Ribcage” are a bit more expansive, lengthy for Lemuria songs and they get a great vibe going. The guitar tone on here (courtesy of J. Robbins exceptionally capable recording skills) is fucking top notch. It’s grittier and a bit meatier than on past Lemuria records, but has this wonderfully warm and crisp feel to it. It seriously makes a big difference in setting the mood of the record and these songs. Main vocalist Sheena Ozella has also taken some new twists with her already playful and delicate voice, hitting some of those high notes in new ways, while drummer Alex Kerns takes a somewhat more upbeat tone with his vocals (side-stepping the more somber tone he has had in the past). This is really a great step forward for the group and I totally dig it 100% (Bridge 9)

LITERATURE, “Cincinnati” 7”
Even though silkscreened this record has a pretty ugly cover and it made me not want to listen to it. But I’m glad I did because I really dig the two short songs on this record. They really could have thrown down a couple more, but hey, I suppose that’s what keeps people coming back for more. Anyways, this is total retro garage pop with playful female vocals and jangly guitars. A little Velocity Girl, a bit of Shonen Knife, but basically just retro garage rock that’s clean as a whistle. The title track is the jam. (Voice Academy/ Square Of Opposition)

NINE GALLONS #2, by Susie Cagle
This here is a short comic-zine about one person’s involvement with Food Not Bombs in the SF/Bay Area. There’s the typical cast of the underappriciated activist, the misunderstood ideologues, the flakey mouth breathers, the burnt out overachievers, bewildered public, and pesky relatives all whom anyone involved at all in any sort of cause will know very well. Susie’s stories here are all too familiar, but are communicated simply and quite well about some of the outside influences and distractions to being involved in Food Not Bombs. (Microcosm Publishing)

PARAMEDIC/ SPRAYNARD split 7”
A playful record cover/artwork gives way to two PA bands that have a similar kind of playful energy to their music. Both bands have a similar vibe going- scrappy and rocking emo style music (think 1995, not 2010), very rough around the edges and hearts worn clearly on sleeves. Paramedic, I think, is my preference of the two simply because the female vocals add a dash of variety, while Spraynards side - though decent- is a little more typical of this fare. Worth checking though simply because 4 songs on a 7” is a deal no matter what. (Square Of Opposition)

PISSED JEANS, “Your Life Is Worth...” 7”
Yup. You get what you pay for. And either you’re going to check into this band and get the completely stupid humor or you’re going to hate them and wonder why they’re so stupid. But that’s the catch.. they’re actually awesome! A record cover that took no more than two minutes to make, a lead off track called “Sam Kinison Woman” and linear notes that list Leslie Neilson as band member only because the accompanying live photo has his image on a screen behind the band. I can’t really explain it, maybe they really are just dumb, but it somehow makes me smile. The music remains great- dirty as shit rocking punk, taking equal cues from Flipper and Jesus Lizard, and blending it up into some weird stew. The B-side is a repetitive drone with all sorts of weird glitches and mistakes while vocalist Matt Korvette talks about his love of the Flyers, pie, and a good sunrise over, and over, and over. Again, funny in an annoying sort of way. Maybe it’s because they really do kick ass on the musical front I can appreciate Pissed Jeans for their odd brand of humor/annoyance, making it all so great. After all, they are one of the best bands I’ve heard in years. But if you have never heard them I’d start with one of the full lengths first. (Sub Pop)

RESTORATIONS, “Strange Behavior” 12”
I was such a big fan of Jena Berlin, which is two members of this bands former group, that I was anticipating hearing this new group. While it’s clearly not the same group at all what remains are the gravely and soulful vocals of frontman Jon Louden. I’ve always admired his voice, which takes a style similar to Polar Bear Club, but with a bit less happy-go-lucky and a bit more Soul Man (C. Thomas Howell version only because Jon is actually white). Musically it feels a lot more settled than Jena Berlin and has a lot more in common with groups like Lucero, and perhaps a dash of Casket Lottery in it’s sound. Then again, there are only 4 songs on this LP, so as an EP it’s a little hard to tell exactly where they will go just yet, but it’s a decent start. (Paper and Plastick)
Posted by Hex Records at 9:29 AM No comments: