EXHALANTS DEBUT FIRST SINGLE FROM NEW ALBUM... WHICH YOU CAN ALSO PRE-ORDER 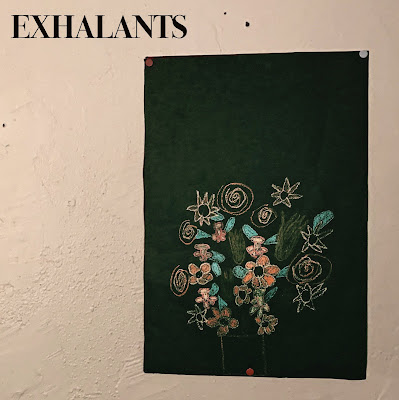 
The first single from the record, "Bang", can be heard now via a premiere on Metal Injection.  Go and check that ripper right now.
And from there feel free to pre-order "Atonement" on LP, CD, or digital either HERE or HERE.

Exhalants began in 2017 sprouting from their local DIY and club scenes with one goal in mind; be loud as fuck.The three-piece quickly cut a demo, played some shows around town, and then set out to record their first full length not long after that.  That first LP yielded a strong collection of songs that balanced the moody experimentation of indie heroes like Unwound and the harsh distortion and feedback-drenched noise rock of Unsane, coupled with raw emotion on display. The record received a good amount of acclaim, which helped Exhalants get their name out more and tour throughout the U.S.  During this time they also recorded a split 7” with fellow Texas trio Pinko (Hex Records) to have while both bands were out on tour together.
Immediately following the release of their first record, Exhalants started working on new material. They spent most of 2019 writing and touring, fleshing out newer material on the road while still promoting their 2018 self-titled debut. While on their West Coast Tour, Hex Records spent a couple days getting to know the people in the band and offered to release their next record for them. After wrapping up both West and East Coast tours, exhalants focused on finishing the rest of the record and decided to take Hex up on the offer. Plans began to emerge for what would become their second LP, “Atonement”.
The band began recording the album in the Spring of 2020 in their practice space, with a pandemic looming on the horizon. While the pandemic caused some hiccups with getting things finished in the studio in a timeframe they had planned on, it eventually came together with a great deal of DIY know-how and taking some of the mixing duties into their own hands.
The members of Exhalants all have roots with playing in multiple bands around the area and have been employed by various venues in town, so they are no strangers to the community aspect and DIY nature of playing the sort of decidedly non-mainstream music they do.  With a mountain of amps, precision pounding drums, eardrum-rattling feedback, and a healthy dose of experimentation Exhalants are easily one of the more exciting newer bands to gain attention within the punk/noise rock arena in recent memory.  “Atonement” aims to push that sound further for anyone willing to listen.

Posted by Hex Records at 2:19 PM No comments:

HERE'S WHAT WE HAVE GOING ON FOR MOST OF THIS YEAR

So we're already halfway through this incredibly weird and pretty miserable year.  However, always the optimist, I figured it was far past time to give an update on what's going on with Hex Records for the majority of this year.
If you pick up the newest issue of Decibel you'll see an ad for these plans laid out: 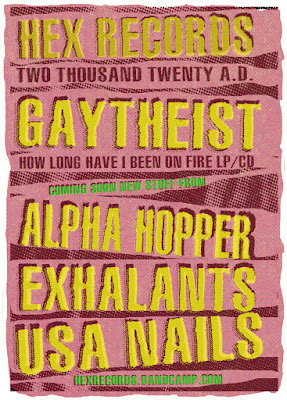 Obviously, events of this year have pushed things back a little bit, as I had initially planned to have one or two of these records out around July or August, but we're looking at September and October for most of this.
You all know that Gaytheist record is still on fire and they're fully intending to do more with this record (more on that in the near future) so check it out if you haven't already.
Next, we will be releasing the new LP from Austin, TX three-piece Exhalants.  I was so impressed with their self-titled full length that I just had to track them down and find out more about these fine Texas gents and now here they are with a whopper of a new album that we cannot wait to get out into the world.  Their blend of filthy noise rock excess, unexpected weird melodies, and amplifier worship is truly an interesting sound we want to share with the world. If you're unfamiliar you can check out some of their older music here.
Hot on the heels of that will be the third LP from some friends from Buffalo, NY.  Alpha Hopper haven't been around all that long, but they already have quite a discography under their collective belt.  The members are prolific musicians in their own right with guitarist John Toohill having at least three other projects he is consistently involved in.  Alpha Hopper combines a wild mix of off-the-wall guitar effects, bratty but existential vocals, and these total earworms hiding beneath the chaos.  I highly suggest their last LP, "Aloha Hopper" as a primer for what's ahead on "Alpha Hex Index" (which they named prior to even being approached by me), expected out in September.
And in late-October you can expect the fifth full length from London, England's USA Nails.  Talk about prolific.  "Life Cinema" was released last summer and by November of that same year (2019) they had already recorded another LP with the intention of waiting until the fall of 2020 to release it.  The band knows how to get to work.  More news on that in the near future.
Finally, I just want to add that this is not it for the whole year.  We got a bit of a surprise in store for the Winter.  I know things have been super weird, confusing, and often difficult.  I find, personally, just keeping the work going and keeping busy with that keeps me sane and I appreciate, to no end, the patronage and support received from people interested in these bands and records.  Thanks for hanging in there even through the tough times!
Posted by Hex Records at 11:20 AM No comments:

IS THE WORLD OVER YET? REVIEWS FOR JUNE