This time it's literary (oK, there are some comics too...  with words) only.  Reading...  it's FUN-damental.  Even if there are fart jokes. 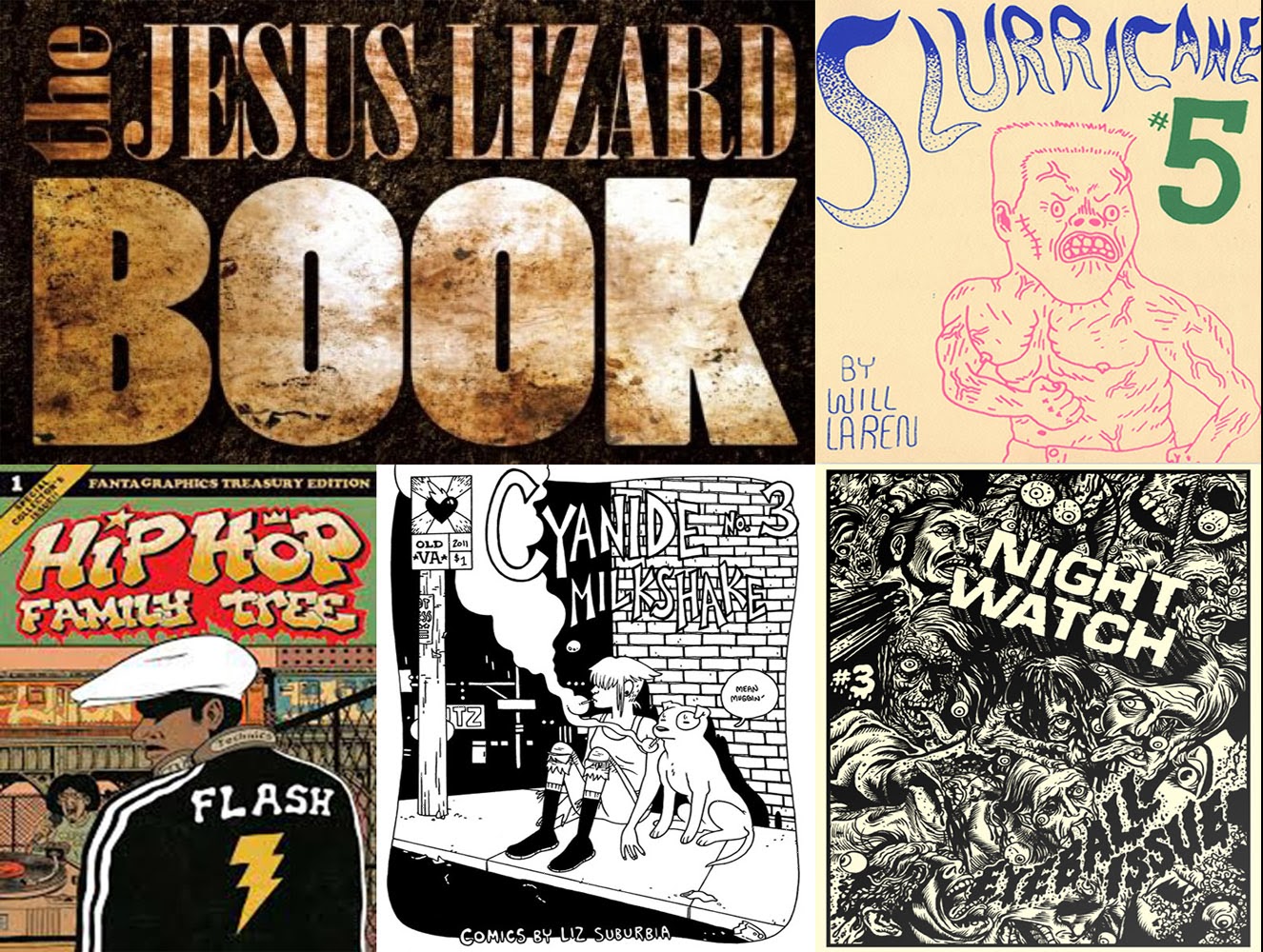 CYANIDE MILKSHAKE zine
I think discovering the comics of Liz Suburbia has been my favorite art-related thing in the last 6 months.  It’s the perfect combination of punk, humor (both lowbrow and highbrow at once), and awesome art.  Her style is very flowing, fun, and has an excellent sense of line.  Each issue of this zine contains short stories about dogs getting into adventures, an ongoing saga of two punk lovers surviving a zombie apocalypse, humorous rants, sex, and lots of hilarious fake ads.  Liz also has some great online-only comics on her site that are worth checking out.  But these are most certainly worth your few measly dollars too.  Get it. (Czap Books)

DO-IT-YOURSELF GUIDE TO FIGHTING THE BIG MOTHERFUCKIN’ SAD, by Adam Gnade
You know how we all have that aunt, or maybe some person you know from high school that you’re not sure why you’re friends with, on Facebook who consistently post those vague little inspirational affirmations with a picture of a field or something, along with something like “OMG so true!!!” in the caption?  This is like an entire book full of those.  This guy basically made a bunch of lists, all saying basically the same thing, about how to rise above when depression starts setting in, and remain productive.  If it works for the author that’s cool.  But if I want a pick-me-up I prefer to go to music I suppose.  Interjected throughout the book, though, are various little stories that are about actual experience that I found far more interesting than the lists, and far more substantive as well.  (Pioneers Press)

HARD FIFTY FARM #2, by Jessie Duke
OK, I didn’t catch the first one, so the story kind of picks up with a couple getting out of the West Coast and moving to semi-rural Kansas.  I sort of like how the story jumps quickly from moving there, jump ahead a ways and she’s pregnant, jump ahead a couple more years and there’s kids and a husband possibly unhappy with how his life has turned out, jump ahead a bit more and a car crashes in front of their house and they help deal with it.  The author does a nice job of bringing you up to speed without having to say much, and still putting the reader in the context of her life.  Anyways, it’s a quick read.  I wasn’t sure, at first, if this was just fiction until I saw some of the photos in the zine and realized it’s pretty autobiographical.  (Punch Drunk Press)

HIP-HOP FAMILY TREE, by Ed Piskor
My first exposure to hip-hop was through some compilation LP my Dad brought home from the library sometime around 1983 or 1984 I guess.  Hearing this cool music with personalities like MC Ricky D (later known as Slick Rick) and Doug E. Fresh filled my young mind with what music could be.  Then around 1988 I became a fervent devotee of “Yo!  MTV Raps”, the afternoon show that showcased hip-hop videos and hosted by characters such as Ed Lover, Dr. Dre (the East Coast one), and Fab Five Freddy…  who I had no idea were so instrumental in hip-hop’s very early origins.  From that point on I was a hip-hop junkie for the next several years.  I still hold much of that music as influential and instrumental in my growth.  So to see that a comic/graphic novel of the mid-70’s origins of hip-hop has been put together made me very excited.  It’s a fantastic depiction of the mood of the era, with DJ’s creating beats and playing them in parks and house parties in the Bronx/Queens areas of NYC.  The people who got this all started- DJ Cool Herc, Afrika Bambaataa, Grandmaster Flash, DJ Hollywood, Russell Simmons, Kurtis Blow, and more- all show up and cross paths, battle each other in the parks and clubs.  People like Fab Five Freddy, with connections to the graffiti and art scenes, introduced the music to art circles, and then into the punk and new wave scenes.  I find it a fascinating chunk of history where so many big things were happening at the same time (graffiti, punk, rap, etc), that would have massive cultural impact upon the world.  And to think so many of these players are still at it.  This book drops off around 1981 and I believe a second book is in the works.  I love the art style in here too, each page looking as if it were torn out of a comic from 1975.  A must read/view for people interested in hip-hop history.  (Fantagraphics)

JESUS LIZARD BOOK
All you reg mouth-breathers will get the dregs version of this book, but since I was a good boy Santa delivered me the ultra-fancy one that comes with a special 7” record signed by all the band members, as well as some wacky postcard drawn up by David Yow.  So suck on that turdlings.  Yeah, so if my obsession with this band couldn’t get geekier, they have a coffee table book now, simply entitled ‘Book’ (makes sense for a band that used four-letter words in the title of everything they ever did).  It’s a couple hundred pages of various accounts from band members about who they are, how they came to be, as well as dozens of stories from fans, associates, tour buddies, and other band people about the musical juggernaut that was The Jesus Lizard.  I personally enjoyed the bits about each album, how it was recorded, and bassist David Sims dissection of each song.  I have to say though, I’m a little dismayed that he included no descriptions about the songs on “Down” because he hated that record so much.  That, for me, was the introduction the JL, and stands as a record I very much enjoy from them.  He also isn’t a big fan of “Liar”, which is my personal favorite in their catalog.  But I digress.  Hundreds of photos, flyers, a complete listing of every show they played (probably close to 1,000 in total), and other associated details of the band are included.  Sure, it gets a little over loaded with stories of how great of a live band they were (that doesn’t even need to be said, it’s undisputed fact), but any story involving basically anything David Yow does is worth the price of the book….  and there’s plenty of those too.  (Akashic)

NIGHT WATCH zine
A zine that promises ‘beer, boobs, and barf’ only registers 1 out of 3 in my interest zone.  But primarily the makers of this publication focus on art of the strange, B-horror movie, tattoo art, and related strangeness.  So it’s kind of an art zine.  Juxtapoz of the lowbrow perhaps?  Local detail-obsessed, obscurity-hound and tattoo slinger Mike Tommyrot draws up the cover of the latest issue and is interviewed (which tends to be worth the cover price alone as the man is wealth of useless/awesome sub-references), along with showcasing a great deal of his artwork.  Other wild and wacky artists contribute pieces to the zine, some are excellent and funny, others not quite my taste.  For some real fun, take a look at their tumblr page, lots of wacky shit all over that thing. (Night Watch)

SLURRICANE zine
I’m not sure I can accurately convey how ridiculous this zine is.  So this guy, Will Laren, draws these sorts of random pictures of people, usually not very glamorously, and writes a bunch of absurd text above them.  This goes on page after page.  There’s no story, just an immediate situation that gets more ridiculous by the word.  A man on a cell phone calling a bug supplier to deliver a million moths to eat the ‘poor people clothes’ off his body because he won the lottery and wants to buy new duds.  An old man yelling at a young kid that he don’t know shit about stealing pies cooling on a windowsill because he had been doing it for years, got too greedy, and burned his hands down to stumps stealing molten bars of gold cooling off on the windowsill of Fort Knox.  It really makes no sense and that’s the best part, and makes each page, each picture, and each bit of text the funniest shit I’ve read in a long time. (Slurricane)
Posted by Hex Records at 5:23 PM No comments: 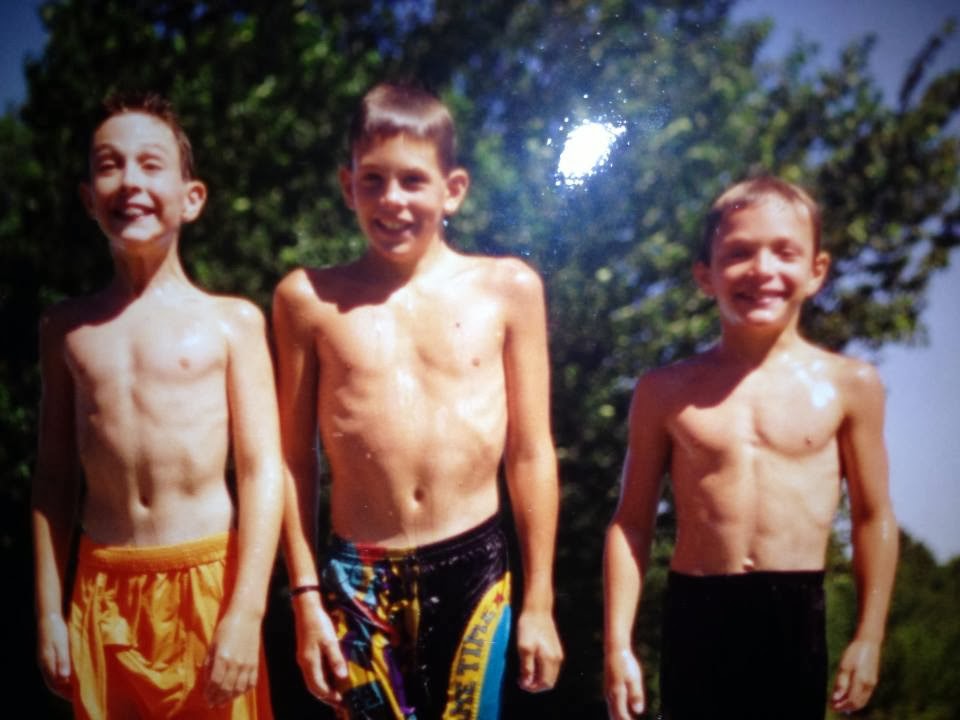 As previously mentioned, Hex Records will be releasing the debut LP from Syracuse’s BLOOD SUN CIRCLE.  The record is now mixed, mastered, and ready to be shipped off to press.  Entitled, “Bloodiest/Sunniest” these 8 songs have been crafted and perfected by the band as they whiled away the fall and winter…  and you can hear it in their music:  stark, bitter, and still massive in scope.  Consisting of the three Gorham brothers who made up most of Engineer (Hex Records, Black Market Activities) they used the gear shop they all own as a practice spot after hours to write these songs, and occasionally showcase them to audiences.  Once ready, they then went to long time friend, and local audio guru Jason “Jocko” Randall at Moresound Studios to put it all on tape.  The record ought to be out in May. 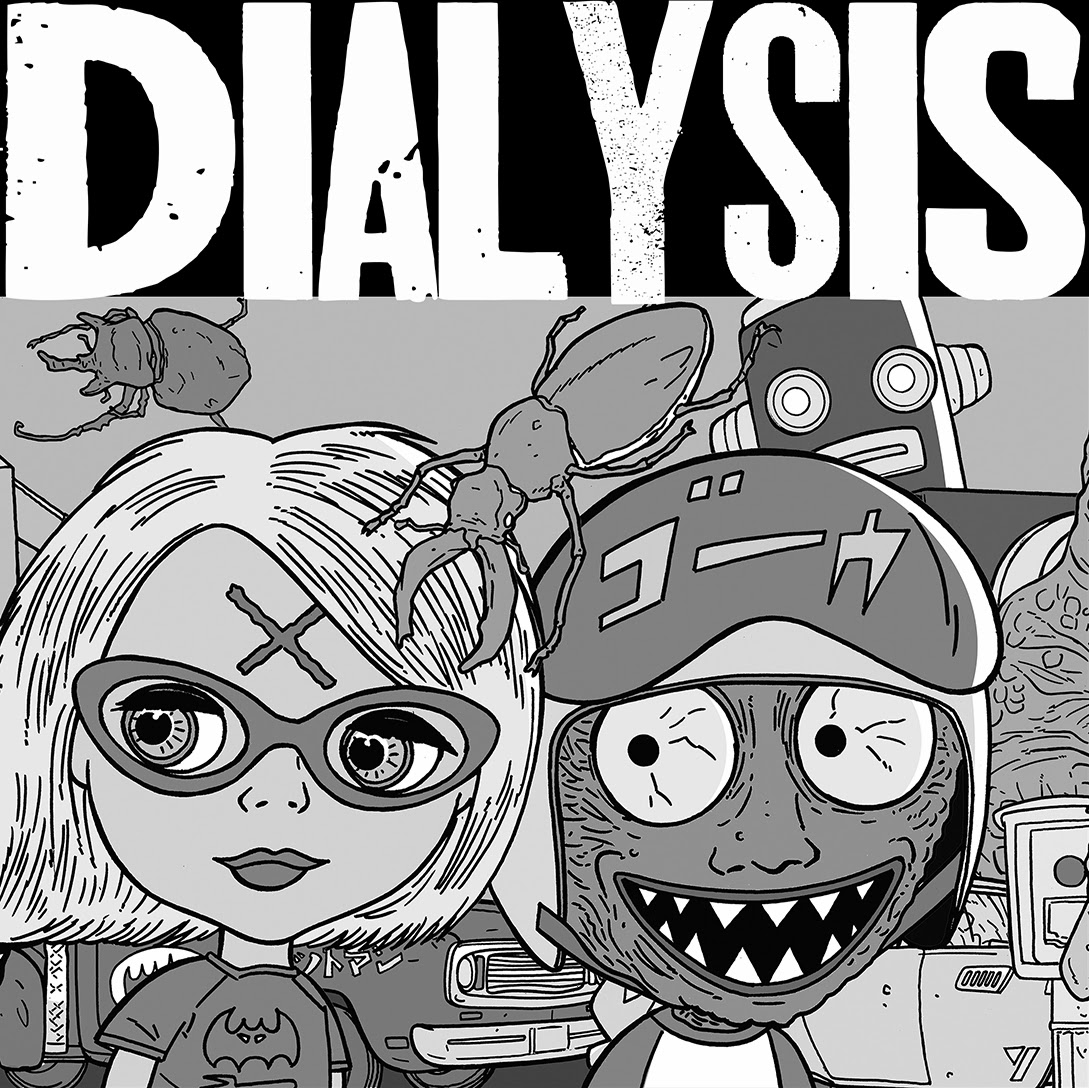 Hex Records will be releasing the debut 7” from Syracuse, NY grind/punk unit DIALYSIS.  Big shocker.  The goal of Dialysis is to write short, fast songs really quick.  Some times they’re serious, some times they’re funny.  Pretty much all of the time they rip though.  Whitling down the standard rock band unit to just guitar, drums, and vocals Dialysis waste no time in getting to the point and doing so quickly.  11 songs (10 of which will appear on the record) were recorded in a single day at Moresound Studio with Jason “Jocko” Randall at the helm.  The record is appropriately titled “Ludicrous Speed” and features awesome wraparound art from underground comics mastermind Shaky Kane (Bulletproof Coffin, 12 Ways To Die).  Track listing is as follows:
1.)   Grand Delusions
2.)   The Void
3.)   Wedge Of Hate, Carton Of Spite
4.)   Population Smoker
5.)   Sonic Euthanasia
6.)   Back To the Stone Age
7.)   Scum Defiler
8.)   Nosebleed Section
9.)   And now…  the Beatings
10.) Tough Guys Always Lose

Two songs can be heard online HERE.  The record ought to be out in May.
Posted by Hex Records at 10:00 AM No comments: