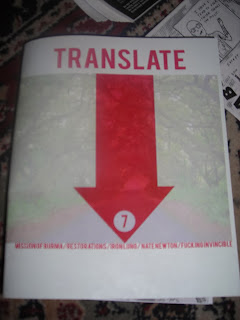 It's been a good year or so, so it's about time for another issue of TRANSLATE. This time around we go back to interview style and catch up with the likes of Restorations, Fucking Invincible, Iron Lung, Mission Of Burma, and Nate Newton about growing up, having families (or lack thereof), and trying to still find time to do this 'punk band' stuff/nonsense. Additionally, plenty of rants as well as some comics to boot. 32 pages chock full of reading/viewing material.

I implore you all to check this out and/or buy.


* PS- I'll be heading down to Gainesville Fest again this week and will have them with me there if you are reading this and going there.  Otherwise, mailorder buddy.

Posted by Hex Records at 4:38 PM No comments:

Yes, it's not an October without Rocktober.  I don't care if it's the name of a magazine, or probably some shitty local radio station promotion I'm taking it.  I will always take it.  And with that being said, I'd like to lay down some stuff that hath been reviewed in this month, the month of scary stuff, Fall colors, and hot apple cider.  Get into it or drop out of life. 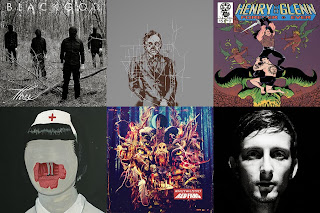 BLACK GOD, “Three” 7”
If the title didn’t give it away, this is the third seven inch from this Louisville side group.  And like their previous records there are again six songs, each no longer than two minutes in length.  It’s a good rule to keep, and since this band seems to be more out of fun than anything it’s great to see that their quick songwriting doesn’t get too self-involved.  Since it’s basically what was Black Cross rejuvenated that ought to give an idea.  And when you get fellows from Coliseum and Young Widows teaming up for this thing imagine their styles colliding and birthing songs with an upbeat tempo and a love of Wipers jams.  Top it all off with vocalist Rob Penningtons very distinctive yelp, as well as his always thoughtful lyrics and you get another winner from Black God.  (No Idea)

GREAT FALLS, “Accidents Grotesque”
I know I’m in the old minority here because at this point audio violence such as this is a bit dated, but I don’t know how anyone can listen to this and not want to smash all things nearby in fits of miserable rage.  Great Falls have been churning out warped noisecore heaviness for a few years now, and before that two of their three members were fracturing skulls in Playing Enemy.  This is their second full length and it’s just as mean, noisy, twisted, and ugly as anything they have done in years past, over various bands.  I mean, ugly is clearly the proper word here.  If one were to describe the sound of this band in one word it would clearly be ‘ugly’.  Titles such as “God Arms the Patriot” and “Replace Me With Fire” give way to knotted, coiled riffs that bend and sink so low into your skull and then whip you back out of the water with harsh, pained vocals and frantic rhythms.  Noisecore at it’s nastiest.  I will never not be moved by heaviness such as this.  (Hell Comes HomeRecords)

“HENRY AND GLEN FOREVER AND EVER”, Tom Neeley & more (Igloo Tornado)
The original book/comic that launched this was hilarious.  Glen Danzig and Henry Rollins as ‘life partners’ and engaging in blissful domestic life together.  This one is a little short on content, but offers three short comics from Tom Neeley, Mark Rudolph, and Josh Bayer.  Neeley takes a stab at offering up his regular cartoon-ish style crossed with some Jack Kirby homage (in fact, there’s a few Kirby digs throughout).  Rudolph makes light of some recent Danzig foibles in “How the Chores Thrill”.  Finally, Bayer takes a surrealist approach to the pair’s lifelong path-crossing and their complaints through it all.  Pretty funny stuff, but I think I liked the hodgepodge of random nuttiness in the first edition.  Tack on another 10 pages and this thing would have been stellar.  (IWDYComics)

MALLWALKERS, “Shake the Rust Off”
This Buffalo ensemble collects various people from a number of local bands and splays them all out in an 11-piece no-wave funk band.  Imagine some wild alliance of James Chance and the Contortions, Parliament, and Bauhaus all blended together for some repetitive party jams heavy on the horns and somehow sad at the same time.  I don’t know how it works, it just does. However, I cannot see myself spinning this regularly.  It’s pretty weird, but funky and somehow these 11 people are organized enough to make it happen.  (Peterwalkee Records)

PSYCHIC TEENS, “Come”
For one reason or another I just assumed this band was a pop-punk band of some kind.  I couldn’t be more wrong.  Oh sure, at times they play kind of fast and I suppose what they do could be considered punk.  But this has way more to do with goth-y post punk with really wild and grating guitar effects.  Immediately I think of Peter Murphy fronting Year Future or The VSS (minus keyboards), but that might be too obscure a comparison.  Take the vocals of Joy Division, the repetitive rhythms of Gang Of Four and some really terrorizing guitar effects.  And somehow it’s all quite catchy.  It just works really well.  And while some songs have that more upbeat feel they also keep it slow, lengthy, and hypnotic with songs like “Lust” (one of the best here) and “Veil”.  The CD version also includes their first full length tacked on as well, which is just about as good, if not a little weaker on the production side.  (SRA Records)

RED FANG, “Whales and Leeches”
First things first, the band really outdid themselves with how insane this record looks (well, maybe kudos are in order to the designers right?).  It’s like some B-movie poster about some monster collage, except, ya know, way better.  Anyways, on to the music.  I remember this band’s first record and it was quite a ripper.  But I really can’t remember much of it to be honest.  And that was the last I heard of them.  So my gut feeling is they have evolved quite a bit since that time.  I do recall them having hints of Mastodon in their sound, and that remains here.  But combine that with some rather Queens Of the Stone Age style desert rock riffing, tones, and harmonized vocals (evident in the psych-fuckery at the end of “1516” and the stone-y “Every Little Twist”).  Now take those two band references, mash ‘em up, and bake on ‘beer party rock’ and you get a Red Fang soufflé’.   Yes, quite enjoyable indeed.  (Relapse)

SELF DEFENSE FAMILY, “The Corrections Officer In Me” 12”
I highlight this particular release out of the many, many records SDF is consistently excreting into the ether because of a few factors.  First, apparently they wrote and recorded this in a couple days and still came up with three songs that are better than most bands that spend months on compositions.  Second, the design of this record is ridiculous.  The cover is very plain but they managed to screen print all the lyrics onto the B-side of the record.  Really neat idea.  Finally, these songs are great.  “Pop Song Written On the Automall” rolls with a repetitive little riff and Pat’s hoarse vocals riding atop of them until a weird chorus melody comes in with a different singer(s?).  The damn thing has been stuck in my head for days now.  That is usually the sign of a good song.  The two other songs are fairly long, so don’t worry about spending a little extra dough, it’s worth your time.  (Family Drugs)

SPRINGTIME, “South Hill” 7”
The band is described as mixing up Dag Nasty and Swiz.  Between the melodic hardcore and gruff vocals I get where they are coming from on both counts.  The lyrics, though, fall a little bit into the bland Saves the Day field and musically it tends to veer into modern pop-punk/hardcore.  It’s OK though; their hearts are in the right place.  It’s the curse of youth looking up to awesome bands that were tearing it up while the members of this band were still wearing diapers.  What can you do?  It’s all time and place and to expect a young band to fully grasp the energy of older bands they look up to is a tough thing to grasp.  Kudos for trying and half-succeeding.  (TinyEngines)
Posted by Hex Records at 6:39 PM No comments: