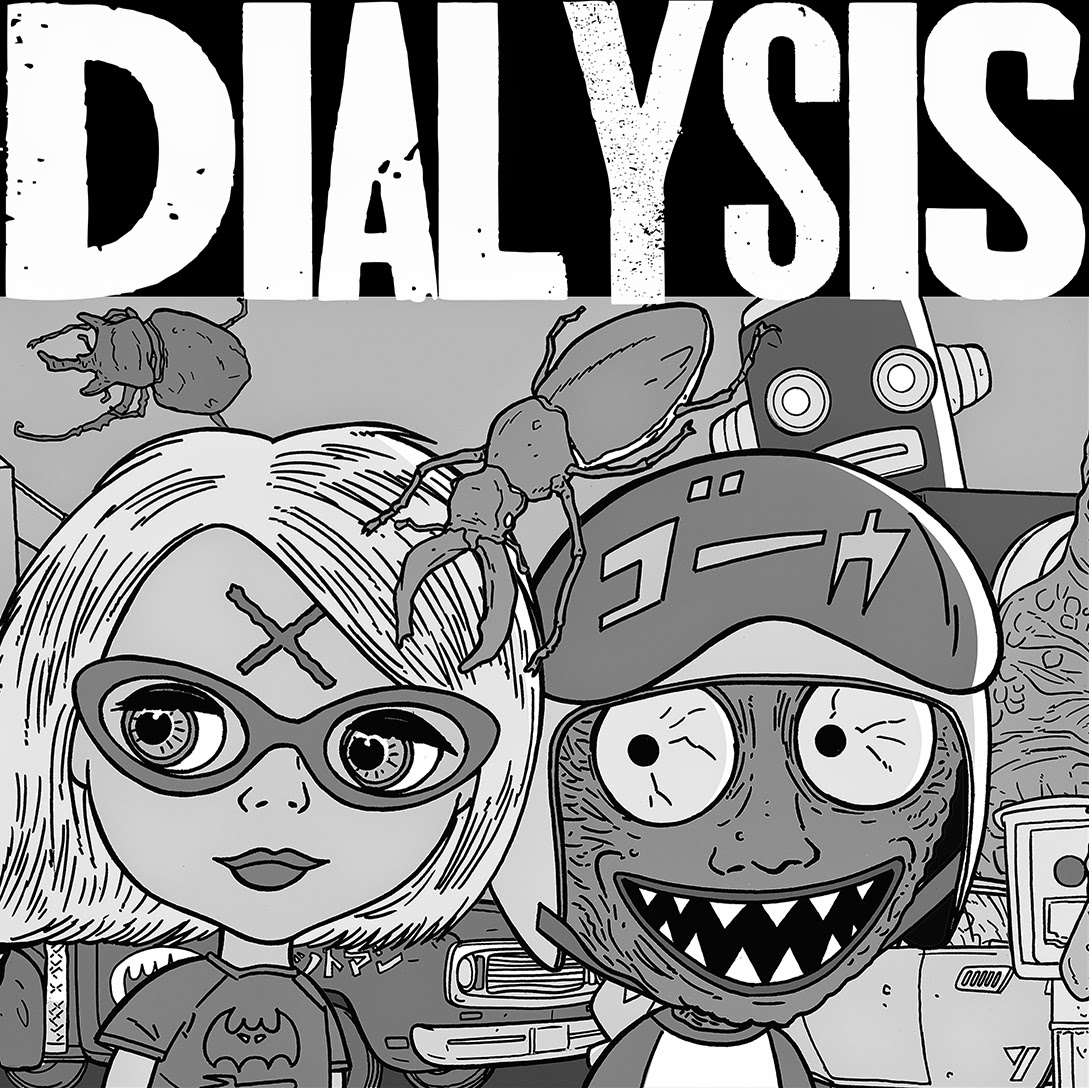 Check it out! DIALYSIS, "Ludicrous Speed" is streaming on the bandcamp! And for those who enjoy supporting music, but do not like being weighed down by physical objects, you can now purchase the entire record (and bonus track!) off the bandcamp site!

https://hexrecords.bandcamp.com/album/ludicrious-speed
Posted by Hex Records at 7:45 PM No comments:

As Biz Markie would say, "It's Sprrring agaiiiinnnn!"  So celebrate all that with plenty of time outdoors and hopefully with some music and reading in tow.  Nothing better than lazing on the porch with a good read and some music blaring in the background. 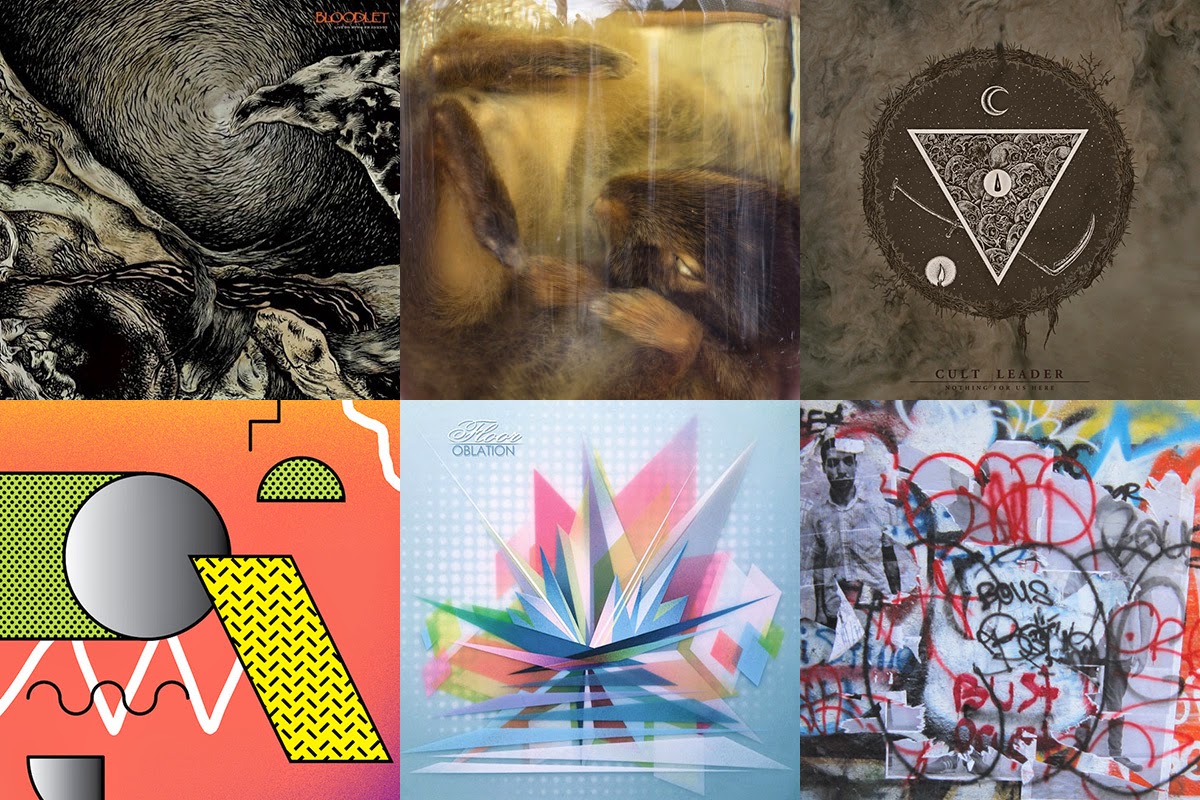 BLEAK/ HELL MARY split 7”
Syracuse’s Bleak offer up their two heaviest tunes yet.  The first is a chaotic and violent mess of a massive shelving collapse in a sledgehammer warehouse.  The second track is a  slower climb, and then descent, on the ‘ol riot stairs with an incredible chunky breakdown in the middle- like apes beating on war drums while listening to Crowbar.  They are our hometown’s answer to Disembodied.  The recently deceased Hell Mary carve out their niche on the B-side with three quick burners that lie somewhere between Suicide File’s fun and catchy hardcore and 108’s semi-metallic leanings.  The band rips.  Too bad they called it a day.  Still worth a few clams so pick it up if you see it around. (Fake Art Fake Music)

BLOODLET, “Live On WFMU” LP
Unearthed from some dusty old vault, live from 1995, the one and only Bloodlet.  Quite literally, no other band sounded like this when they were at their peak.  And to this day no band has ever really been able to properly imitate them either.  This is from a radio performance, when the band was still a 5-piece and they are playing mostly “Ethenogen”-era material.  Aside from a couple little audio farts and a couple minor mess-up’s the sound (and present re-mastering) is great as is the tightness of the band.  A couple of the songs sound a little different, as they were either slightly re-worked from their original recordings, or not quite tweaked to perfection for when they would be laid to wax officially, and that’s interesting to hear for a person mildly obsessed with this band’s output.  Additionally, there is an instrumental track on ere that never made it on to any official Bloodlet release, so that’s a treat.  If there’s anything wrong with this release I’d have to say it’s lacking a little bit in presentation.  I know it’s just a radio session, but it would have been nice to have an insert with some notes from the band or whatever, or even a download to go with it, especially given the price.  A389 puts out awesome records, but they tend to be a bit on the pricey side.  (A389 Recordings)

CREEPOID, “Wet” 12”
As if their long-awaited new full length hadn’t just come out Creepoid released a special one-sided 12” EP for record store day.  I’m pretty sure you can find a few of these floating around as it isn’t one of those things that was gone in an instant.  It’s certainly worth it as you get 4 new heavy psych-stoner-shoegaze rockers, colored wax, and some weird-ass involved etching on the B-side.  Aside from the one oddball track of atmospheric strangeness this leans more on Creepoid’s drugged-out heavy slacker side moreso than their breezy, yet eerie, tuneful one.  This is a really great, yet brief, collection of songs from one of Philly’s finest.  If you can’t find this EP don’t be a chump, go and get their self-titled LP instead, like now.  (Graveface)

CULT LEADER, “Nothing For Us Here” EP
The members of Gaza lost their singer, did some minor musical chairs, and have now returned as Cult Leader.  Basically, in their new formation, it sounds pretty much just like Gaza.  They offer up a couple deviations from their past efforts, including closer “Driftwood”, which rides a slow and steady behemoth riff throughout.  Opener (well, after the beginning noise track) “Flightless Birds” treads familiar territory- noisy chaotic metal scattershot like aluminum shrapnel in a bottle of drano left to explode in a subway station at rush hour (scary thought, yes?).  These same stomping grounds are re-visited later on “Skincrawler”.  So, yes, it’s a bit of a mixed bag for the band’s debut.  But those familiar with their past efforts will be pleased with this and the sonic adventures they take you on for, oh, about 15 minutes.  (Deathwish)

EX HEX, “Hot and Cold”/”Waterfall”, “Everywhere” 7”
I went to see Rocket From the Crypt a couple times last month and had no idea who was opening for them.  When a trio of bad ass ladies got on stage and proceeded to rock the fuck out I not only marveled in awe of their rock prowess, but also something about the guitarist/singer was quite familiar.  I then figured out that it was Mary Timony, long time DC mainstay and former front person of 90’s indie rock bulldozer Helium (and, more recently, Wild Flag).  Needless to say it was a pretty nice surprise.  Their introduction on this Trapper Keeper-looking 7” is three songs.  The first, “Hot and Cold”, is an instant classic.  The riffs and vocals have been stuck in my head for weeks.  It’s pretty damn catchy.  They also made a hilarious video for the song featuring the Spiv, which I highly recommend watching.  “Waterfall” is the sort of forgettable song on the record.  It’s not bad, but doesn’t quite stick with me either.  Closer “Everywhere” once again brings back super-catchy riffs, especially at it’s somewhat drawn-out ending.  Imagine Thin Lizzy being played by Heart…  at a beach…. In the 70’s, everyone’s eating some pasta salad, having a good time.  Yeah, that’s a good record/picnic.  (Merge)

FLOOR, “Oblation”
Fuckin’ Floor.  Ten years after they disband they make a new record.  While the casual listener may not be able to tell the difference between this and a Torche record (it is the same singer/guitarist after all) I’ll offer this- the last several years of Torche has seen them explore more pop song elements and way more melody to go with their low-tuned monster rock attack.  Floor have melody too, but prefer the crash and thud of bomb strings, slower (overall) grooves, and crushing rhythms.  OK, so it really is a bit tough to tell the difference honestly.  It doesn’t really matter because this thing is a pretty damn good return to form.  My favorite songs on here tend to be of the slow, chunky dirges where the drummer still manages to have some swing with all the smashing of blunt objects going on (try “War Party” or “Trick Scene” for kicks).  For three dudes they definitely manage to bring the house down and it’s very nice to see them back in action.  (Season Of Mist)

RUINE “Winter 2014 demo” 7”
Soul-crushing, bleak, filthy and mean sludge metal.  These cats ain’t fucking around.  It’s a 7” and only two songs on it, and each one uses every iota of available wax to punish you (you probably deserve it).  One mean riff piled atop another with no hope of ever coming up for air.  This is not a bad start for a new (I’m pretty sure they are new anyway) band.  I’m very interested in hearing more, I’m a glutton for punishment.  (Forcefield)

SPRAYPAINT, “Rodeo Songs” 12”
This sounds like Wall Of Voodoo with some of Sonic Youth’s guitar pedals and tuning.  That’s a compliment by the way.  This post-punk Texas trio is a couple guitars, a drummer, and all three sing these sparse and weird quick little bursts of punk.  If you want to get all technical I guess they’re kind of a no wave sort of band, but still kind of rocking in an odd Devo-minus-robot synths sort of way.  So yeah, I mentioned Wall Of Voodoo.  I think it’s because of the nasally sort of vocals, reverb-y frantic sort of guitar work.  I found these songs not translating quite as well to record as they did live.  Upon seeing this band I have to say I was quite surprised.  Fans of weird, yet strangely rocking music will be intrigued by this, especially if you like the bizzaro stuff AmRep churned out near the end of their initial run (Calvin Crime, Servotron) or Brainiac.  I know I reference a lot of bands that employ synths, even though Spraypaint don’t use them.  I think I’m just comparing bands based on how weird they are.  So maybe it doesn’t make sense.  Honestly, I don’t care.  Spraypaint sound pretty fucking weird and I’m perfectly OK with that.  (S-S Records)

SURROGATES, “Easier Without You” cassette
Local act The Surrogates have gone through multiple lineups since they began, but have now settled with a half-Syracuse, half-Binghamton conglomerate.  In this time they have come up with a chunk of pop-punk burners and committed them to tape.  While I’ve never been a fan of pop-punk vocals that go for the semi-nasally nice guy/bratty boy thing (think Blink-182) I will say the other vocalist who handles things in a bit more gruff manner delivers well.  Musically, I’m reminded of Baltimore rockers Dead Mechanical, which is never a bad thing.  Six quick blasts to make you run around in circles.  (http://thesurrogates.bandcamp.com/ )

THIS AIN’T NO PICNIC, by Josh Ploeg
Josh Ploeg is about as punk as you can get in the kitchen.  The man not only offers wild concoctions of ingredients I’d never really think of putting together (and somehow making it work), but also offers tips on cooking on the fly, which sometimes literally means instructions for cooking on a hot engine block in the middle of nowhere or making s’mores with a lighter.  This is one colorful and weird cookbook.  It’s all about getting your hands dirty, cooking with weird and dirty people, and taking some chances on stuff you may not have thought of every trying in the past…  all vegan, of course.  The author not only offers up many recipes but also meals he thinks well known punkers would like (John Lydon’s Lavender Tea Cakes or Joey Ramones Black Bean Pizza), and offers up fun musical playlists throughout.  I’ve met the author on a few occasions and he basically tours the world as a vegan chef much of the year, doing his thing for bands on the road, important people in far off countries, and creates countless zines about his cooking.  This will probably be one of the most entertaining cookbooks you will ever read.  It’s also hilarious.  (Microcosm)

Posted by Hex Records at 9:34 AM No comments: