I no longer have clever titles for these posts, my apologies.  Anyway, it's summer, what the heck are you doing reading this stuff?  Unless, of course, you're doing this outdoors, in which case, carry on.  Behold- some gross, ugly punk; some reading material in printed form; some thoughtfully-crafted thinking person's music.  It's all here really.  What more do you want? 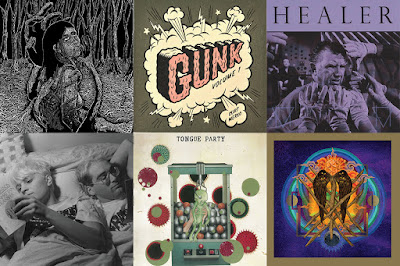 CLOSET WITCH, s/t
Totally manic grindcore out of Iowa, which makes sense because if I lived in a flat, and vapid wasteland like Iowa I’d probably be compelled to play music this harsh as well given the wrecked mental state I’d clearly be in due to my surroundings.  With this release you get a good mix of standard fare blasting, but things move like a tornado, often a blurred and chaotic mess in the best way possible.  Other times less traditional aspects come into play, akin to their recent tour mates in Cloud Rat and their experiments with epic atmospherics and occasional sludgy breakdowns.  And other times there’s some bizarre Deadguy/Rorschach-styled noisecore leads mixed in with the whirlwind of sound.  It’s kind of messy, and there’s often a lot going on.  However, Closet Witch seem to be closing in on getting their thing, whatever that may be exactly, honed to perfection.  They haven’t been at it for too long, but they’re quickly getting real good.  (Halo Of Flies)

GUNK, vol. 1
Professional illustrator Curt Merlo takes a brief respite from his day job to throw together a small zine of his weirdo art and short comic stories that are heavily influenced by Charles Burns and 50’s comic book ads.  So, of course, I’m into it.  I dig the grainy print style of the zine and the limited use of color.  It definitely gives the whole thing a 60’s chapbook feel.  It’s rather short though and having a little extra content would be great.  But hey, I’ll take what I can get. Get slimed in the weird world of Gunk.  (Saboteur Press)

HEALER, “LP One”
And out of left field comes the debut full length from Buffalo’s Healer!  They have been tearing up faces for a few years now around the Northeast and, to date, they basically just have a 7” to their credit.  However, that is totally made up for with 22 rippers in all of about 25 minutes on this record.  If you hadn’t figured out already, Healer play short and fast.  Their music is a mix of powerviolence, some Negative Approach-styled hardcore, a few slow and sludgy parts, and raspy, guttural, nasty as a Rochester garbage plate that’s been left out in the sun for a couple days vocals.  Thus far, this album has been released digitally, yet I am assured it will also be released on a physical format.  I’m looking forward to that so I can read the lyrics to such eloquently titled tracks such as “Hammer Time”, “River Phoenix”, “Hairclub For Men”, and “Potato Salad”.  I know it sounds a little silly, but I’m pretty sure there’s some weighty topics behind those titles.  Get wrecked, Healer are no joke.  (Healer)

L.M.I., “IV”
There’s so much going on here that makes this a bit confusing.  And I don’t mean too much going on like some shitty tech-death wanna-be early 00’s metalcore band.  It’s like, in my own mind, collisions of influences that don’t make sense, but still, overall, sound sort of cool.  So there’s a NYHC sort of vibe to a lot of the songwriting in that you got some kind of groove-oriented, but punk-leaning, hardcore that brings to mind more modern NYHC bands.  And then there’s also a heavy post-hardcore style going on that some of the Long Island bands from the 90’s brought.  So far that doesn’t seem too out of the realm of possibility.  But then you get this weird tone to the guitars and all of a sudden a chaotic element, like early Drowningman comes into play and I start to think that none of this makes sense and I’m OK with it.  People under the age of 30 probably won’t know what to do with that description and they probably hear something totally different.  But you know, that’s what I hear, so deal with it.  This EP tosses out five more rippers for scratching your head while moshing.  The weirdest part- they’re not even from NYC or Long Island…  they’re from PENNSYLVANIA.  What the fuck universe do I live in? (self-released)

SELF DEFENSE FAMILY, “Have You Considered Punk Music”
This is a hilarious title considering this is such a soft record.  Even the title track meanders with some Americana-style twang and, if I had to take a guess, the band did not consider punk music when it was being composed (or maybe they did, and their answer was, ‘let’s not make ‘punk’ music’).  Honestly, my favorite material from this rotating cast of musicians was when they were at their Lungfish-worshipping apex.  The music was melodic, introspective, and still had a bit of heft to it.  Since then they have gotten way more mellow.  Hell, Patrick doesn’t even sound like a yelping dog anymore (that’s not a critique, I was cool with it), trading hoarse yelling for almost whispered thoughts on all the usual abstractions and point-blank ‘this is my life’ type lyrics he is known for.  So as much as the music doesn’t quite do it for me as much these days I very much respect what they do for always pushing in different directions, even if those directions are as gentle as playing wind chimes with feathers.  And I feel like I’m totally trashing this record, but it’s quite good in fact.  You just have to go into it knowing this is an ever-evolving band and while they may play very reserved and sparse music lately it’s not without a strong impact.  There’s a quiet tension, plaintive melodies where lyrical twists fall like bricks even though they are delicately spoken, and an underlying current of experimentation that is always willing to try something new and seeing if it sticks, and making it all sound natural.  Not a bad effort if you ask me.  (Run ForCover)

SLEEPLESS NIGHTS zine #3
As far as straightforward hardcore zines go…  um…  I’m surprised they still exist?  Get transported back to 1998 and check out this slick rag that is about 50% photos (full disclosure, I contributed a number of pictures to this) and the rest interviews.  Within those interviews you will find the always-amazing Greg Bennick going on about his insanely productive life and one incredible story about traveling to the Inside Out reunion shows in 1991, which pretty much is worth the price of the zine alone.  Ray from Taken/100 Words Or Less offers some interesting insight on growing up in SoCal and a couple rather basic interviews with fairly new bands Cutting Through and Big Cheese. In addition, a crazy story about some adventurous kids in Utah going cave diving and dying (I actually heard this story from Greg Bennick a few years ago), and some on-the-road shoplifting (hello, ‘youth’ my old friend).  Maybe 20 years ago I’d be a little nonplused by this since 10 zines a week came out like this in this style.  But since it is a rarity these days I was pleasantly entertained and informed by this.  Not too shabby.
(sleeplessnightsfanzine@gmail.com)

TONGUE PARTY, “Looking For a Painful Death”
I don’t know how this band gets their tone but it’s so ridiculously gnarly that listening to it is like trying to walk through a wall made of slimy bees.  Yeah, that’s my analogy for the day.  Also, this band is named ‘Tongue Party’.  Let all this grossness seep into you and then you might be ready for the new full length from these Midwest garbage dwellers.  Lots of fuzzy, beefy, ugly riffs abound here, which stop and start on a dime while blasting between unbridled noise rock Valhalla and revved up speedy hardcore-thrash.  They did a split not too long ago with USA Nails (another amazing band that I’d just like plug as a sidebar) and that was my first introduction, and they kind of stole the show.  This record just comes full force tenfold from that and I’m pleased as punch that they sound as weird and ugly as they do. This record contains a song called “I Can Shit Anywhere”.  I respect their commitment to form.  Well done.  (Learning Curve Records)

YOB, “Our Raw Heart”
Yob has been an institution in Oregon, and in the doom/sludge scene, for over 20 years.  I had no clue they had been around that long.  I also had no idea this was their eighth album.  I’ve hardly listened to any of their other albums, but checking out this behemoth of a record (and believe me, it’s a task at 73 minutes, I had to break it up into two days of listening to get through it all) is a varied affair.  There is crushing heaviness, and slow atmospheric passages filled with melody and sung vocals.  But just as those parts come and go the doom that I’m sure long time listeners love is ever-present.  My understanding is that this is a sort of different record for Yob and, to me, that difference is song to song.  Some of it almost feels like different recording sessions even.  “The Screen” is easily one of the meanest and heaviest songs I’m sure I’ll hear all year.  And then the title track (which closes out the record on a mighty note) is big and lush and full of huge melodies as vast and scenic as the Columbia River gorge of the members home state.  I’m not sure what to make of it all as there’s a great variety throughout the record, and while it lacks a bit of consistency throughout, it certainly showcases what Yob is capable of on many levels.  (Relapse)