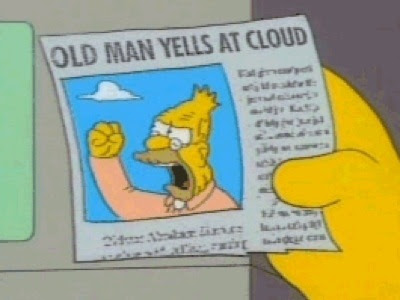 A friend had recently mentioned that this blog hasn't had much new stuff to offer on it aside from record reviews and I suppose he is correct. Yet, seeing as this exists to supply info about the label and associated projects I don't typically make it a point editorialize on here. Perhaps I ought to more often? Or would that just further a 'cranky old man' status I'm guilty of having?

If it's label news you want I do not have much to offer as of right now. Most of the label bands are keeping it quiet lately with occasional shows here and there. Next to no orders are coming in because everyone seems to see fit to steal whatever I release with no regard to the large sums of money I apparently like to simply set on fire might be another news item I suppose. I probably cannot afford to keep doing this much longer based upon this 'finance recording for band so everyone can simply steal it from you' model so... yeah, that's what you get.

Perhaps it makes no difference because people are going to make music regardless of whether there are labels around to release it or not. And if artists are tenacious enough they will figure out a way to get it out to people and manage to sustain themselves regardless of who is/isn't footing the bill. So yeah, labels can be pretty pointless in some regards.

But on the other hand there is quite a thrill in discovering music, especially when made by friends, that knocks your socks off, and having the means to push it out there for more people to discover. Finding meaning and inspiration in the songs, how they were recorded, the minutia of the gear used, tones achieved, words spoken, and how it is all crafted makes it worthwhile. Creating art to go with it, and putting it all together as a physical document of something I find to be important will never get tiring for me. But it's that disconnect between what I think is important, what I think everyone else ought to find important, and what the majority of people actually give a shit about are very different things. And most people feel that plopping down $10 for music they only half enjoy on a physical format they do not understand would be better spent in a movie theater on a Friday night.

How can I argue with that? I mean, I can easily argue that, but it really just boils down to personal opinion. And my opinion is that most movies suck and if I could finally find a copy of Quicksand, "Slip" on vinyl I'd take that over most any movie any day of the week. And that's just me.

So with that it appears that the masses have spoken. They want everything for free. But guess what- you can't have it for free because the things I do and the groups that have recorded music for me to release on their behalf has tremendous value. It's worth something and I refuse to belittle that work because some jerk off with a shitty little blog (and probably more popular than this one) decides that they're entitled to give away anything and everything without so much as asking permission, or a polite request. And that's where I know I'm going to lose because people are going to do it anyway. They're all still turds in my mind. So I will probably do a few more releases I fully believe in, and by the time they're finished there will be six people left on Earth who remember what a 'record' is.

In the meantime I'd say that if you claim that music saved your life, or is your life, or is of great importance to you than walk the fucking walk and give some goddamn respect back to it- go see the bands that appreciate your support, put a few bucks into struggling artists pockets by picking up a record or whatever. Love is a two way street.

And if you do care to support what I do than pick up something I've put a lot of love into. You can get my records from these places: Deathwish, RevHQ, Robotic Empire, In Vinyl we Trust, Vinyl Junkie, No Idea, Ebullition, MVD/See Of Sound, and, of course, direct.

Jumping back to the subject of love, and segueing into the personal, I'll be getting married next year to the love of my life. Amongst the general disaster that was my summer there were a couple of gems of light in the grimey filth that surrounded them. The first was a great garden harvest that kept my belly healthy and full. The other was getting engaged. So it's official and I'm pretty excited about what lies ahead. On the downside, I did have my wallet stolen, my car unexpectedly shit out, and one of my foster cats suddenly and tragically died. but the positives were like 12 Bane records rolled into one. Gotta have that PMA right?

And for the immediate future I want to start a band again. Of course, the vocalist position is a mindless vacancy where deciding 'what to sound like' is basically out my hands completely, seeing as I have next to no musical talent to back it up. Still, if you love Jehu, Deadguy, Jesus Lizard, and KARP and somehow still manage to be vegan straightedge and over the age of 25 (all 3 of you... myself included) get in touch because it gets harder and harder to want to attempt this shit with other humans and actually feel OK about life.
Fnally, Halloween weekend-ish I will once again be soaking up rays at the Fest in Gainesville. Be there or be a turd. I'll be hawking wares. Get at me and get something. I'll be the only person there not drinking, but still having fun.
Posted by Hex Records at 9:20 PM No comments:

It's time to do another sale here at Hex HQ (AKA, my attic). Call it a Labor Day sale, I don't care. I call it, 'get some records on the cheap'.

We'll have this happening for the next week (expires on 9/12).