There has been no gradual change, Fall just appeared one day.  It was 90 degrees one day and 60 the next.  I'm cool with it.  I'll take chill Fall days any time.  Gimme a warm drink, a couch, a comic book, a record in the background, and I'll pass the whole day away...  one can dream can't they?  OK, so a few of these reviews come from records that have been out for a bit, but whatever.  This is all about the influx of the short and fast, as more than a few have graced my turn table as of late.  OK, read on and start getting anxious about Halloween (the only holiday worth a damn). 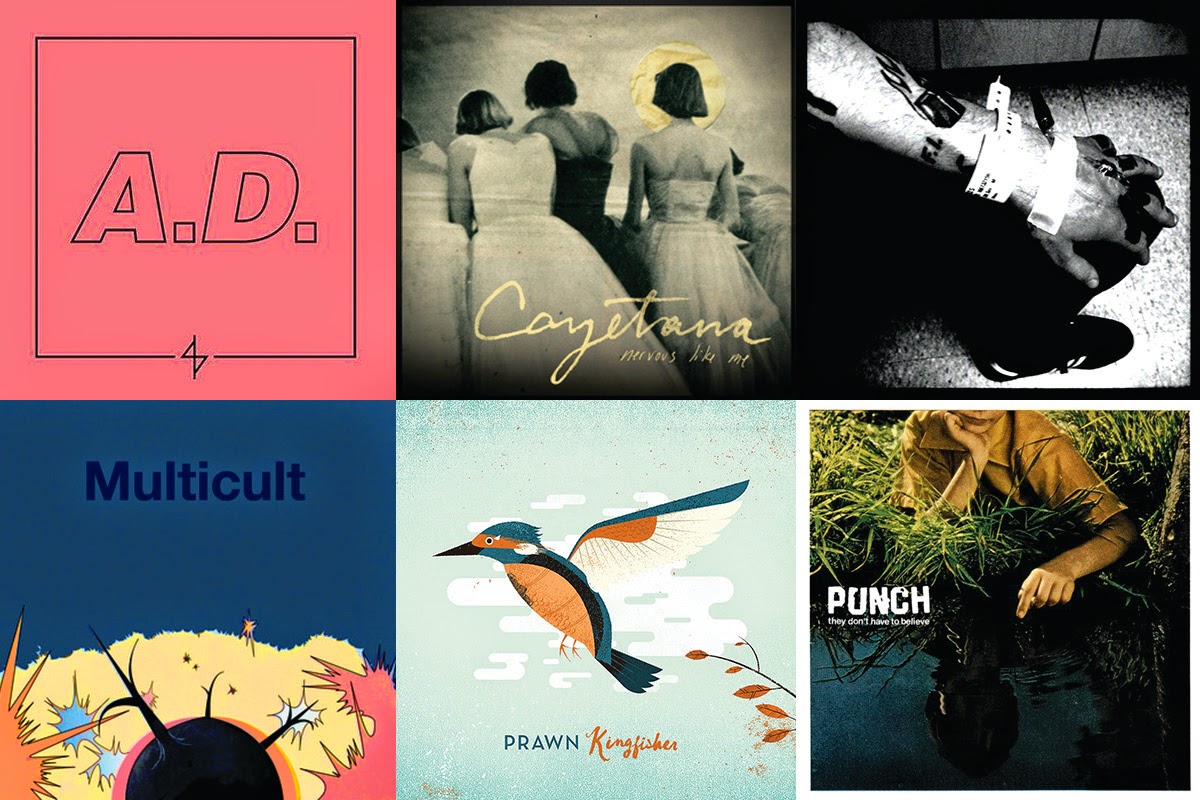 ANGEL DU$T, “A.D.”
Are they joking, or are they real?  Are they both?  Such is the sort of question one should not even bother to ask when listening to Angel Du$t (yes, the dollar sign is part of the name).  Just accept it for what it is, even though most of these dudes have played in bands worthy of being played as a soundtrack for back alley brawls.  After a killer 7” from last year they follow up with a dozen songs on a dozen inches of wax and call it an LP.  Fifteen minutes later you’ll be exhausted from bouncing around the room like an idiot.  Each song is a fun burst of punk rock that strides the line between some SoCal style and NYHC/older H2O about love lost, love spurned, and all that gushy stuff in-between.  A lot of emphasis is put on the vocals to add a dose of melody.  I dig their simple style, which is not only reflected in the instant catchiness of the songs, but also in the package of this record.  (React/Reaper)

CAYETANA, “Nervous Like Me”
So did this band explode overnight or what?  I’m happy to see that not only has this young group garnered considerable attention quickly, but that they have grown a lot as a band, and songwriters, in a very short period of time as well.  After a demo and a seven inch it appears they have put some time in with recording their first LP and it’s a wonderful record full of catchy anthems and plaintive gems.  It’s easy to get lost in the songs here as they move through haunting melodies, bouncy bass lines, a steady beat, and the uniquely emotive vocals of guitarist/singer Augusta Koch.  They add in hints of organ and synth for background texture on a number of songs and all these elements combined make for a great debut record.  Songs like “Black Hills”, “Animal”, and “Scott Get the Van, I’m Moving” are my favorites here, having heard them live months ago and still caught in my head once I heard this record.  That’s a good sign of a catchy song.  If I were offer up any changes it would be that a few of these songs have been on their other recordings and I think I just want to hear more new songs aside from the ones I already know!  (Tiny Engines)

FUCKING INVINCIBLE, “It Will Get Worse Before It Gets Better”
After numerous setbacks with actually getting the physical copies of this record out F.I.  finally have a ‘full-length’ to call their own.  I put that in quotes because even though there are 14 songs on here it takes all of about 14 minutes to get through the whole thing.  Whatever.  If a band can come up with that many songs and fill two sides of a 12” it’s a full length.  I’m assuming you can guess what they sound like if you’ve never heard them based off of that?  No?  Play extremely fast, throw in a three second face-smashing breakdown, and wildly screamed vocals and then get to the next song.  That’s pretty much the gist of it and I’m a huge fan of the particular jib that they’re cutting.  But if I may get into the details I have to say the recording here is more grimey than their last two seven inches.  I’ve grown to dig it after listening to this repeatedly for the last couple weeks (it’s pretty easy when it’s so short) and it translates better on vinyl than it does via mp3.  But it lacks a little of the punch that was present on the first couple 7”s.  I will say, though, that everything is mixed together more evenly on this record.  OK, now go and play faster.  (Atomic Action)

GREEN DREAMS 7”
Good and rowdy fuzzy punk from Rochester.  This group has gone through a few different lineups and changes over the last couple years, but it feels like they’re settling into their groove on this four-song ripper.  You’d think a married couple and their friend would sound nice, right?  Instead you get snarled vocals, garage-y clatter, and a hardcore/punk love affair tearing it apart at the seams.  Love hurts, but it’s catchy.  Could use a better recording, though I’m assuming they want it to sound dirty.  (CherishRecords)

LONGEST WAR 7”
If you lived in Buffalo from the mid-to-late 90’s (like I did) you will recognize exactly what is going on with this record, even though the members of this band are spread out from Rochester, Hamilton/Ontario, Buffalo, and the West Coast.  But they all share some Buffalo love and represent it here like it never went out of style.  Think meat-and-potatoes working class hardcore, a bit of youth crew, and just a dash of Slayer and you have Longest War.  They managed to cram five songs onto this little record and having known some of these dudes for a long time I can say without hesitation that this is pretty much exactly what I envisioned them doing when they started playing.  (Press Gang Records)

MULTICULT, “Variable Impulse”
A couple of the guys from Virginia’s long-running Wayward (yeah, I thought they split too, but they are still going!) probably thought to themselves, ‘ya know, we don’t sound enough like Jesus Lizard yet’ (truth be told, while sharing some similarities The Wayward have more of a proggy vibe… but I digress), so they went and started this band….  which sounds just like the Jesus Lizard.  And I imagine they will take that as a compliment.  OK, so maybe the vocals are discernable and some of the more propulsive and wild elements common to TJL are a bit more restrained here, let it be known Multicult do a fine job of paying homage in a very legit way.  Some of those slightly prog inclinations they have going on in Wayward poke their noses around here, but all riff sniffing aside, Multicult lay down some seriously heavy bass work and twisted, gnarled- but thoughtful- noise rock skronk that I can get down with.  (self-released)

PRAWN, “Kingfisher”
A friend’s band recently played with this group out of town and reported back how awesome they thought this group was.  Having absolutely nothing to go on but their good word I found myself the recipient several days later to the contents of this album and gave it a go.  Uh, my friends were right.  Rarely does a band invoke spirits of old and spit it out into the modern world with their own unique twist on things, and make it work seamlessly.  Yes, Prawn pines the sounds of mid-to-late 90’s emo and post-hardcore, dissects the template and adds washes of expansive guitar, as well as passages of intricate riffs.  The first half of the record expands on the intricate and more rocking end of things, punctuated by opener “Scud Running” and later on by “Dialect Of”.  The second half moves slower, wandering in and out of expansive sounds until it culminates in closer “Halcyon Days”.  All in all, it’s an excellent record that is leaps and bounds above their previous body of work.  A sleeper hit for sure.  (Top Shelf Records)

PUNCH, “They Don’t Have To Believe”
If there is one thing that is not up for debate with the Bay Area’s gnarliest (debatable) hardcore group it is consistency.  You know what you’re going to get with Punch, down to the look of their records.  The minor changes apparent are ones that any decent band should hope to accomplish- more cohesion to their musical rampage, and not being afraid to occasionally stretch the length of their songs out a bit (in their case, past the two minute mark).  What remains is a loud and ripping record full of blast beats, youth crew breaks, massive build-up’s, and throat-shredding vocals.  The lyrics continue to pine mostly the ‘personal-is-political’ theme, and are done so with a bit more clarity than on previous recordings in my opinion.  Punch do what they do and they do it in an awesome way.  Like the record says, “play fast, or don’t play”.  (Deathwish Inc.)

RINGWORM, “Hammer Of the Witch”
More often than not, bands that continue to hack away at whatever path they choose for themselves tend to water down whatever it is that made them so potent in their early years.  The advancement of age, calloused fingers no longer quite on the pulse of what’s happening, careers, kids, ya know, things that remove hungry bands from that which kept them vital to the music they played.  None of these aspects appear to have dulled the razor with which Ringworm has been slicing the ears of listeners for the last 20 years or so.  Maybe they’re just lifer scumbags with nothing to live for but heavy metal, and that’s truly admirable.  I will say, though, this doesn’t quite smash one’s enemies as harshly as records like “Life Is Pain” or “Justice Replaced By Revenge”…  as in, there are less breakdowns.  But this is a solid metal record.  Solos abound out of every corner.  The music is fast and riffs well crafted.  Human Furnace sounds just as pissed and volatile as ever.  Yet many of these songs sound the same…  like one big fast, pissed, metal song.  I suppose that’s not a bad thing, especially for a band still tearing it up after all this time.  This has quite possibly the best artwork of any Ringworm record to date.  (Relapse)
Posted by Hex Records at 7:40 PM No comments:

SURPRISE! IT'S A NEW RECORD! 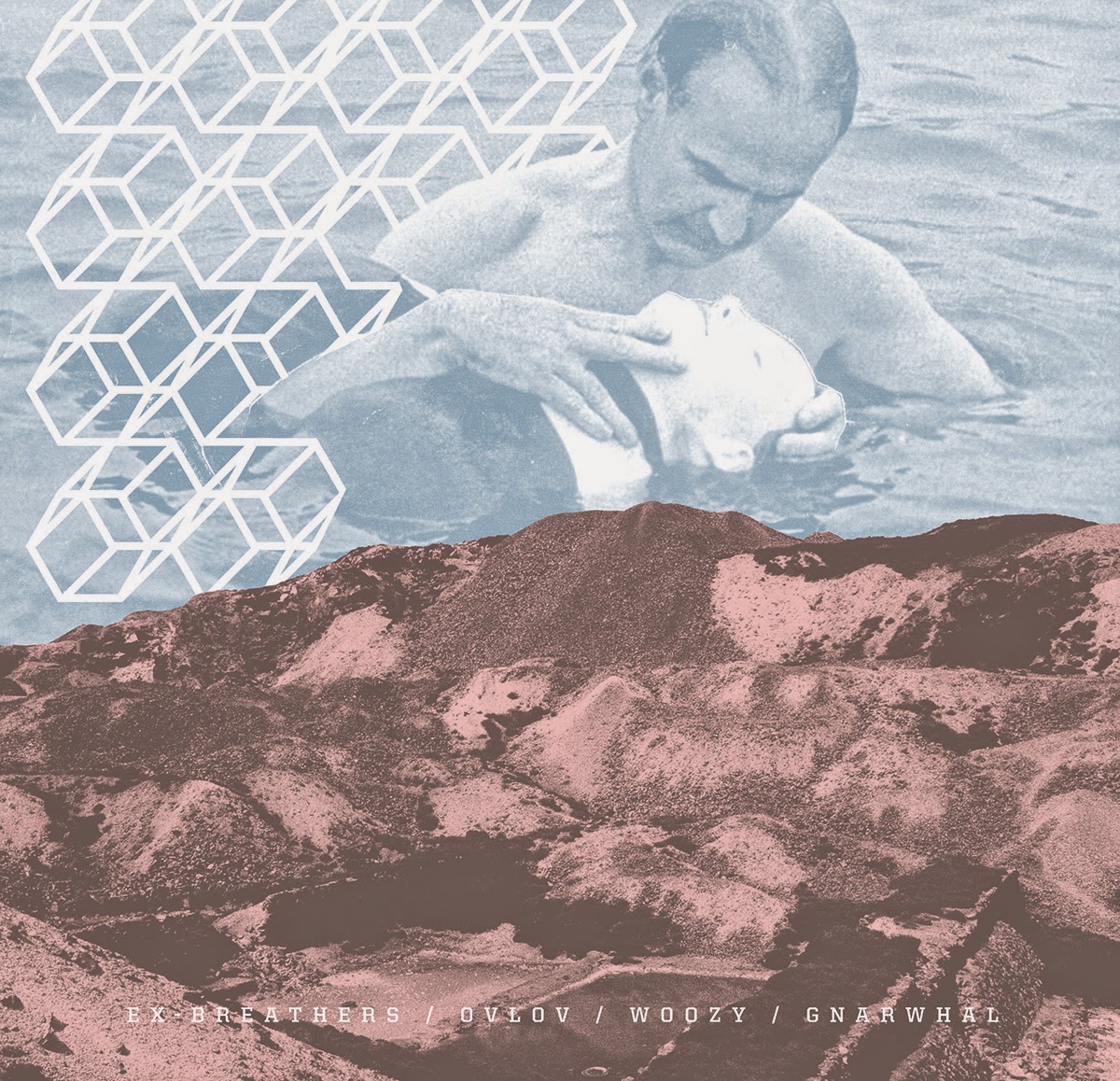 For the first time in...  who knows, forever maybe... we're teaming up with a couple other labels to release a record!  This has been in the planning stages for quite a long time with the lion's share of the work being done by Community Records and Social Cancer Records...  and Hex Records is just jumping on board as a proverbial third wheel.
Be that as it may, this Fall (November to be exact) we will be partnering up to release a four way split featuring Ovlov, Ex-Breathers, Gnarwhal, and Woozy!  All the bands are linked so go listen to them if you haven't already.
The first song from this 12" is up right now from Ovlov and you can check it out HERE.

You can also pre-order the record NOW.

It will ship out in November.

Posted by Hex Records at 8:18 PM No comments: