It has been a very busy Spring indeed, as we roll into Summer.  Gotten a lot of traveling so shows all over the Northeast area, seen a lot of great bands (maybe I ought to review a couple of those shows sometime soon?), and there has been a metric buttload of most excellent records coming out and taking all my money.  Oh yeah, and I get married in a few weeks.  So there's that too.  So in the meantime, I'll leave you with some reading material. 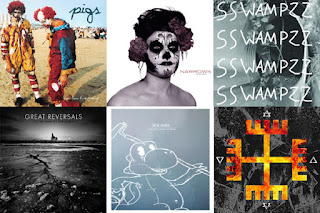 I’m not one to typically review a burned CD with a folded paper cover that’s being sold/given away as a preview to a band’s sound while they’re on the road. But I will say that Boston’s Cerce pretty much kicked my ass when they rolled through town not too long ago, and were quite a surprise. First of all, this band is really young and hearing how tight they played, as well as the blunt force of their attack, made them shine beyond their years. It’s a tight combination of the powerviolence of Iron Lung mixed with some of the more gnarly hardcore of Cursed, and the like. Atop it all are the back and forth between a more gruff male voice and a more shouted/screamed wail of the frontwoman. Four quick rippers to give you an idea of how they roll.  (Cerce)

“GENTLE DREAMS/ BUSTED FUTURES” ,by William James
William James is a poet who tends to tour with bands and go off and do his solo thing between loud music. But reading his words and seeing him perform it are two very different things though. When you read what he’s laid out here, which is a collection of his works laid out quite nicely between thick silkscreened patches acting as a cover one can notice the detail of his descriptions, a great deal of thought put into what he’s getting across. It’s intelligent and well thought out. But when you see him do this live it’s pretty much like seeing a hardcore band, minus everyone but the vocalist. He doesn’t really speak so much as he shouts and yells his poems in a gruff tone, befitting a pissed off swirl of guitars and drums to be backing it. So yeah, what seems flowing and descriptive on paper comes off as belligerent and demanding in the live setting. Kind of an interesting juxtaposition. (William James)


GREAT REVERSALS, “To the Ends Of the Earth” 10”
I’m more into the idea and concept behind this record than the actual music on it. The four songs on this 10” are all about the drummers son and his struggles with autism. For one thing, it’s really uncommon for a hardcore band to address such a topic, which really sets this record apart in terms of lyrics and content. I can relate though, as I have worked with kids and adults with autism for years now. So seeing things in song from a parents perspective is pretty interesting and I thought it was really cool. As far as the music goes it’s done in a way that doesn’t really appeal to me that strongly. Fans of Verse and Have Heart will really dig this as it has a lot of that slower, melodic, kind of 90’s chuggy thing they are known for. That’s not really my bag. But the content is fascinating and the record looks pretty great (4 songs on a fancy 10”), so there’s that going for it. (Great Reversals)


GREY AREA/ THE COPYRIGHTS/ THE REVELING/ LUTHER 4-way split
Four pop-punk bands here that all have a very similar sound and style going on. I have to admit that most of this doesn’t appeal to me that much, but I will say that the fun cover art featuring all the bands as Mexican wrestlers strongly appeals to me. So good job on that end. Right off the bat, lifers Grey Area play fast and melodic and the vocals are legit singing. Token Entry gone softer. The Reveling honestly sound like Green Day to me, somewhere between post-success, but not quite bloated megastar way. I’ve never heard the Copyrights before, even though they seem to be hot shit in pop-punk circles, and I gotta say they were the best of the bunch here. They play a lot faster, more rowdy, and also throw in a Sacred Of Chaka cover. Not too bad. Luther still sounds like a pop rock band to me. I’m not quite sure if they consider themselves a punk band, but they just sound like uninspired rock. There ya have it. (Black Numbers)


NARROWS, “Painted”
I don’t want to say there’s a formula for a good noisy math rock/hardcore record, but I’d have to say Narrows nailed it perfectly. But since this is a subgenre that strongly appeals to me I naturally flock to this sound like ants to sugar. It would be the same for anyone who is a connoisseur of youth crew hardcore. Sure, it all sounds the same to the layperson. But that dude with the straight edge varsity jacket can pick apart every sound-alike band out there and see what’s at the top of the heap. I’m the same with stuff like this. Narrows does combine a lot of familiar influences (and coming from the members pedigrees it makes sense that they sound like this- ya know, later-era Unbroken mixing with These Arms Are Snakes experimental flair) that I really dig. Their combination of sludgy, murky bass tones, with riffy guitars and lots of wild effects against a steady backbeat is the sort of thing I always get roped into wholly. I’d have to give the B-side the thumbs up for better half of the record as the first two songs “It’s the Water” and “Face Paint” fly by at a couple minutes a piece of fast, serpentine rockers. Then, the slow, syrupy crawl of closer “SST” wraps things up in a grand fashion. Over top of it all is vocalist Dave Verellen’s distinctive bark. So while the band pine territory that I’m all too familiar with they do so in such a way that is completely satisfying and fresh. (Deathwish)


PIGS, “You Ruin Everything” LP
Unsane bassist Dave Curran picks up the guitar in this band and dishes out more cranky noise rock dirges that don’t stray too far from his primary musical wrecking unit. That same filthy bass tone and straightforward drumming is on display with Pigs, but the songs tend to have an overall more upbeat approach in a sense. While there is still a scummy vibe going on here pigs tend to rock out a little more and aren’t afraid to mess around with some melodic leads and offbeat riffs. Added is a sense of humor with a Lebowski nod on the last track “At Least It’s An Ethos”, and perhaps with the cover art- depicting a bloodied and possibly strung out Ronald McDonald hanging out on a beach. That is, it’s funny if you’re kind of a sicko. While I feel my preference is with Curran’s main band, Pigs does a pretty good job of delivering the goods too. (Solar Flare)


RISE AND FALL, “Faith”
I’d seen this band a couple times and they never stuck with me. My thoughts were basically ‘heavy European hardcore, kinda metal-ish.’ I guess I didn’t pay close enough attention. Or maybe their sound really evolved into something more interesting. Whatever the case, this new full length (which also has some of the most interesting packaging on a record this year) hits a very satisfying spot in terms of heavy music. While they most certainly took a page (more like barrowed the book and never gave it back) from Converge’s style of tones, production, and feedback the songs themselves give a nod more to Cursed’s brand of blazing d-beat riffage, and the noisy metallic chaos of “The Process Of”-era Turmoil (particularly on the opening track “A Hammer and Nails”). And, to me, that’s a fine place to call home when laying down some fast and vitriolic hardcore. Next time they roll through town I’ll be sure to pay closer attention. (Deathwish)

SICK JOKES zine
Within these pages you will find no text, not any real jokes for that matter. What you will get is a bunch of drawings and sketches by Ben Sears. You may not know much about this dude right now, but I guarantee you will see a lot more of his stuff in the coming months and years. The guy has such an interesting art style that has already found its way onto a bunch of band t-shirts and record covers (including a Lemuria 7” I released). The zine highlights some more of his esoteric and pop-culture-referencing sketches (actually, that seems to describe a great deal of Ben’s art). I’m a little hind because this zine was released last Winter (I think) and it feels like his style has just gotten way better since then. Check it out if you’re into weird sketches and art stuff.  (http://www.bensears.tumblr.com)

SSWAMPZZ, “Sleeper” cassette
It’s funny to hear influences in much younger bands who may, or may not, be aware that they’re referencing something older. Especially when those nods are to already fairly obscure things to begin with. Syracuse’s curiously named Sswampzz are one such group doing this, adding multiple elements to their chaotic sound to create something wholly their own. While the guitar work points towards jangly indie garage rock, and catchy leads (most noticeably on the standout track “Pools”) the extra riffy bass offers up densely distorted power that harkens to Death From Above 1979 style parts. But it’s the overall loose nature of all these songs where it sounds like a band of well-trained musicians who can play tight when they feel so inclined just spiraling out of control, reminding me of mid-90’s era Gravity Records bands… and I like that. They reel you in with a catchy hook and then delve into chaos when you least expect it. It was quite a surprise to see a band such as this come out of nowhere in this town and bring a whole new bag of tricks to freak people out. (Miscreant) 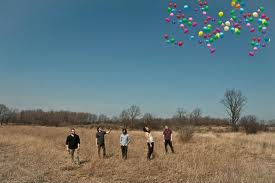 If you didn't already know, we will be releasing a limited CD pressing of the new BLACK THROAT WIND full length, "Between White Worlds" (HXR022, since the original release for #22 never came out this is taking it's place).  We've been buddies with these cats since they started and are happy to get them a physical release of their record, which is up at various sites now (like iTunes, for starters).  Essentially, the band more or less self-released this album, but for those of you out there who enjoy an actual, tangible thing to go along with the music this CD will be just that.  "But why a CD?", you ask.  Well, it's quite simple- vinyl is really friggin' expensive and this record is already out digitally, so a lot of people who want it already have it.  So we thought a CD would be a good route to go, especially since it's going to be a pretty neat-ass package!  Each one will be professionally-pressed CD in a silkscreened arigato pack, wrapped in a fold around cover and wax sealed.  There will be a neat lyric sheet insert and each one will be hand-numbered out of 200.  So how's that for something special?
But wait...  you want to know what they actually sound like?  Well, get dudes from Oak & Bone, White Picket Fence, an a drummer that's played in every Syracuse band for the last seven years and ....  wait, how about just giving a link for a song?  Here ya go:  http://www.altpress.com/news/entry/black_throat_wind_release_new_single_sunwalk

Expect a pre-order to go up in another week and an official CD release show to happen in Syracuse at the end of June.  Actual CD ought to be out by mid-June.