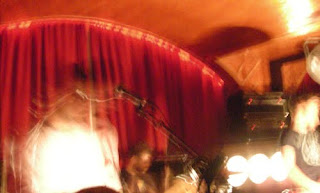 I don't do show reviews that often, but when I do it's because there was something really, really kick ass about it. And for some reason, there have been a lot of kick-ass shows this year.
So why the beginning of a holiday weekend sucked so much ass on a ridiculous level is beyond me, but it probably had something to do with a karmic balancing act to counter the unfuckwithable amount of ass-kicking that occurred in the second half. Things have to even out somehow I guess.
The ever posi and enthusiastic Motion rolled up to my house and we got on our way to Philly in the early afternoon. We got to town with plenty of time to kill, and a number of dudes I hadn't seen in a long time were already present, so some catching up was had. We needed some food soon though and some guy (Jamie Getz, nobody special) directed us to a Mexican joint a few blocks away. I realized I'd been to this place before (La Cantina) and things got comfortable quick. They soon got a little more comfortable when, in the distance, I could see a tidal wave of people coming down the hill. I quickly recognized this as a critical mass bike ride, probably about 2000 people deep. Yet something was off. As they drew closer I realized most of them were nude, or close to it.
Apparently it was the annual naked bike ride, and we just happened to be in the right place at the right time to see it. How fortunate for us. So yeah, I took pictures. 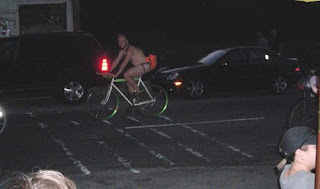 Upon returning to the show things had just began and Zann, from Germany, was getting pretty spastic on the little stage in this packed tight room. I quickly spotted the majority of the dudes from Minor Times/Inkling hanging around and was excited to see them all as it had also been some time since we all caught up.
OK, enough of the schmoozy talk.
Now, don't get me wrong. I love Young Widows. But I've seen them a lot, and while it's always a pleasure, my main reason for coming here was to see Helms Alee. I mean, they barely ever leave the West Coast and I live on the East Coast and, well, who knows when I'll ever be able to see them. So I had to do this trip you see. And as I expected they just killed it. So goddamn loud, but everything sounded just right. I naturally wanted to hear more off of "Night Terror" but they brought out around 4 or 5 new songs I'd never heard. The structures were a little hard to grasp, but by the next night of hearing them it all made sense and I'm looking forward to hearing them on record. Honestly, if you don't have their record you need to get it now. Like, stop reading and get it from these people.
If you need more info their singer/guitarist Ben was in Harkonen and that familiar Northwest KARP/Melvins vibe is there, but with a great melody that brings to mind parts of Sonic Youth and Unwound. Additionally, both ladies in the rhythm section provide vocals as well to round it out and work as a team to deliver some of the hardest-hitting, loudest playing, jams I've heard in years. They also play in a cool band called Lozen if you're so inclined to look into their music too. 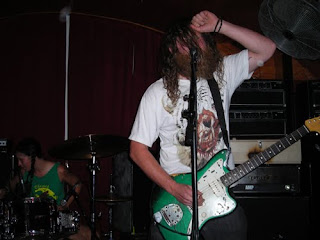 After my perma-grin had faded ever-so-slightly when they finished I noticed my pal Scott had called. He's an ex-Syracuse dude living here and I figured he had received my e-mail about me being down here. In fact, a friend of his had randomly called my number on his phone and he had no clue I was here. I quickly informed him to get his ass to kung Fu Necktie to see Young Widows. He complied.
YW ripped it up, of course, and the new jams sound tight. A couple were familiar ones I'd heard a few months back, others were new to my ears. All I know is that band knows exactly how they want to sound and do it splendidly every time I see them.
Between the rest of the evening and the next afternoon Scott insisted on taking us out to places to eat various sandwiches. How can I see no to that? We were also introduced to the solo album by hip-hop artist Dee Dee King (AKA Dee Dee Ramone), and his song "Funky Man". Let's just say the rest of the trip we were saying "well all-right" every chance we got.

A surprisingly traffic-free drive to NYC got us there way early for the show, which had already been pushed back an hour from the posted calendar time so we basically wandered around SoHo for a few hours.
The regular NYC crew was absent tonight as they were either out seeing Sleep, or they were really asleep. I'd never really seen a show at Cake Shop, though I'd wandered around it a couple times. It really is terribly small and sweaty down there. But it sort of made both Helms Alee and Young Widows sets that much more bad ass (with the exception of the really tall guy behind me during YW that kept hand-banging directly into my shoulder).

Regardless, we took way too long to say our goodbyes, probably because the weekend was so great that I didn't want it to end. It was a long drive home, but by 5AM I was in bed, and totally fucked up by throwing off my body clock and too much coffee had taken it's toll. Well worth it though.
Posted by Hex Records at 2:46 PM