I'd typically say, "lousy Smarch weather" about this month, in typical Homer Simpson speak, but I have to admit it's actually been pretty nice out (knock on wood). So one ought to have a good zine to read while sitting on the porch, or good Spring jams to enjoy while riding your bike.
Of course, now that I say this we'll probably get some unholy blizzard trifecta across the Northeast. So I'll just shut up now and let you read these reviews. 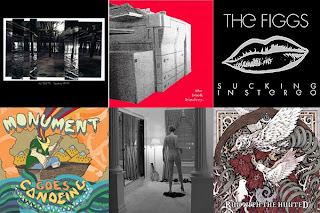 ALL TEETH, “Young Love” EP
While this is a pretty decent showing of modern hardcore of the more stereotypical Bridge 9 variety (think the speed and urgency of American Nightmare as well as the thoughtful and more involved melodic approach of Verse) there are a couple things that kind of irk me about this record. The first, and most obvious, are the downright crappy guitar sounds on this. Did these dudes bring practice amps to the recording? Are these Gorilla combos? They just sound so buzzy and cheap. It’s really a distraction that can be quite annoying. Secondly, it appears as if there are guest vocals on every single song here. While that’s not necessarily a bad thing really, I just think it’s a little weird when a band has a guest vocalist on every track. Maybe it’s because I feel a band ought to be representing themselves on a recording and not other people who aren’t in the band. That’s just me and I shouldn’t gripe about that, I just find it peculiar. Nevertheless, for those who like genuine newer hardcore this ought to do it for you. (Panic Records)

ANARCHIST BIKE RALLY: CONFIDENTIAL MAD LIBS
This is an interesting read- the entirety of this zine is a collection of Freedom Of Information Act-obtained police documents detailing how the Portland PD infiltrated meetings of Critical Mass bike rally, and then raided their monthly rides with unnecessary police presence. While at the beginning it appears to be totally nefarious, as well as a waste of taxpayer money. By the end it basically seems like routine police accompaniment of the ride to make sure people followed traffic laws. Big deal. Still, the fact that the police planted undercover officers at meetings, as well as in the rides in order to disrupt them is silly. And the instances where blatant police abuse is documented and ignored, shines a much-needed light on police brutality that ought to be dealt with. What I find most disconcerting is the budget outlines that show the police department somehow justifying spending upwards of $5000 on officers just for a Critical Mass ride that draws about 150 riders. That’s just stupid. While I don’t really think having a couple officers accompany a ride is necessarily a bad thing, it’s the crazy over-reaction to the idea of Critical Mass that is just plain stupid. These collected documents show how overboard some of it got.
The almost afterthought of the author presenting some of these documents as Mad Libs is kind of a moot point as it is only done a handful of times and doesn’t really add anything interesting to the whole thing. Additionally, there doesn’t seem to be much of a conclusion to this story. Maybe some closure would be nice. (Cantankerous Titles)

BOOK BINDERY, THE, by Sarah Royal
You ever think working in a book bindery would be at all prestigious? Like, you get to make the fancy bound books that sit on library shelves, while that high school dropout friend of yours is stuck as a copy jockey for the late night shift at Kinkos? think again. This is the story of one person’s time spent working at a book binding company is one of Chicago’s less desirable industrial-wasteland neighborhoods. The staff of the business are a motley crew of scuzzy characters, cast into some go-nowhere lot in life. The job itself may as well be copy jockey, as cheap coffee fuels the day and dulls the ache of countless paper cuts, while there is no end to the weirdoes and scumbags who come and go. Everything from the authors bus route, to the strange drug fronts that pose as pizza shops in this almost uninhabited neighborhood, and the naked guy that lives in his car outside the business are all under the microscope here. For anyone that has worked a weird crappy job (which is probably everyone), and the nuances that go with it, this is a pretty fun read. (Microcosm)

FIGGS, THE, “Sucking In Stereo” LP
I believe this is a band that split up some time ago and didn’t ever really get their just due. So Matt over at Peterwalkee Records is releasing this record to shed some light on this otherwise forgotten group. And I’m personally glad he did. It’s the perfect remedy for when you have an itch for catchy power pop. For some reason I’m reminded of 80’s stuff like Split Enz, but with a bit more garage rock swagger. Yet it has that real strong power pop, with the slightest hint of punk recklessness to it. So, yes, color me interested. And it all comes wrapped up in a simple, yet slick package. (Peterwalkee Records)

MONUMENT, “Goes Canoeing” LP
I caught this band in DC back in the Fall while on tour and it was nice to see a band you’d never heard of lay down an impressive set. That is always a fun part of tour- discovering new bands amongst the sea of ugly go-nowhere locals that comprise most shows. So here was Monument, kicking it in DC, and people ate it right up. In this setting they sounded a heck of a lot like Braid to me, and they did it very well. This new LP alludes to something a bit different though. There is certainly that late 90’s Midwest emo vibe present, though they mix it up with a number of different elements- a few Minus the Bear style guitar effects, some of that noodly Algernon type stuff I don’t particularly care for, and a bit of noisy skronk every now and again. It’s a varied package, but with a rather consistent backbone. It makes for a fun listen, so I can dig on it. (Tiny Engines)

PINS AND NEEDLES #3
I really liked the first couple issues of this zine when it came out. Basically, if you’re a hardcore dude in your 30s and you’re starting to do all that adult stuff, and still keep your interest in punk, you’ll get what’s going on here. It’s a mixture of the fun of hardcore and the dumb adult shit you somehow find interesting now that you’re an adult. That’s the gist of the zine anyway. But in this third issue I’m not really feeling it as much. The stories don’t have as much character to them, and start to get a bit redundant as well. What is admirable is the authors decision to quit his steady career-style job in favor of starting his own dog walking business. That’s taking a risk, and it’s always cool to see people follow their heart instead of leading with their wallet. Additionally, there is some info on the band The _Network, including the story included with their “Bishop Kent Manning” record, which I have to admit is just dumb. I know the record is based on a story one of them wrote, but I don’t think it’s very well written at all. And as a bonus, when you get the zine there is a download code for The _Network’s cover of Deadguys “Pins and Needles”... which they do alright. It’s no Keith Huckins and Tim Singer, but then again, no one really is. (Pins and Needles zine)

RUN WITH THE HUNTED, s/t
Not a bad record by any means. A bunch of young, gnarly dudes getting excited on hardcore and playing the shit out of it... how can I diss on that? They do a pretty good job too- very heavy-handed, but not lowest common denominator stupid. They keep it basic enough to just go nuts and smash anything around you, yet interesting enough to know that they actually care about what they’re writing too. Personally, I’m reminded a lot of the Hope Conspiracy with a little more metal in there. Super energetic and heavy, not too shabby. Cover art is total john Baizley/Baroness worship. (Panic)

SADDEST LANDSCAPE, THE, “You Will Not Survive”
I never quite got this subgenre, and furthermore, I don’t get why it is kind of coming back. It’s bands that play a kind of epic emo style, like Funeral Diner or La Dispute. It’s just not my bag. I don’t necessarily think this band is bad or anything, but then again, the music doesn’t really go anywhere either. It’s just these bursts of frantic emotion that would probably be pretty bad ass if they were literally bursts that lasted a minute. But instead, it all feels kind of long-winded and drawn out, and in the end, no matter how many times I listen to it, I’m left not remembering much of anything about this band. (Panic)

WHIRL, “Distressor” cassette
This is a pretty new band out of California that is such a direct rip on My Bloody Valentine that they ought to send Kevin Shields royalties. Not that I mind, because I’m sure the younger generation doesn’t have much knowledge of them, and it’s good to see that new bands have a respect for great music. If you have no clue what I’m talking about this group emphasizes huge walls of shimmering guitar noise and melody, all with spacey and atmospheric tones, and soothing female vocals. They really nail it on this, seven songs of huge guitars, blasting beautiful noisiness, and somehow really pretty the whole time. My favorite jam here is “Child”. (Whirl)
Posted by Hex Records at 4:15 PM

Figgs never split up! 24 years together this August.