OK, so check it out- life is getting busy on the non-label/blogging/reviews/whatever side of life. Why? Because October always has so much to offer in terms of fun and excitement. I'm trying to coordinate wedding plans, going to Fest in a couple weeks, and knee deep in some truly inspiring social change. So what the heck are you reading this stuff for? Go out and get yr mitts dirty!
And may I add a quick change to the reviews: from time to time I'm going to be adding some live show reviews. you can read a couple right now if you'd like. They're below with the rest of the record stuff. 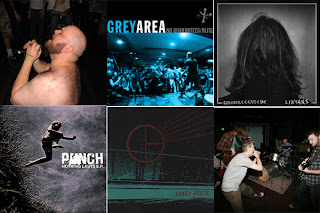 FUCKED UP/WAAVES live, Buffalo, NY- 10.2.11
So I haven't seen Fucked Up in a good 3 years or so and I'm totally in love with the newest LP. So I figured I could forego my big brother's birthday (Does anyone really care when you turn 37? Perhaps a landmark achievement in the dark ages when it was notable that the black plague hadn't claimed you yet, but nowadays just another number) and go see one of my favorite punk bands tear it up just across the border from their native Canada. As an aside, this show was held in a really large venue. I saw both Public Enemy and Devo both sell this place out. So maybe I'm behind the times but did Fucked Up get exponentially larger since I last saw them? Judging by the eerie emptiness of the room apparently not. A last minute local-ish band opened and were OK. Nothing to write home about, but nothing to sneer at either. California hype band Waaves played next. I guess I ought to see what all the excitement is about. Well, it was cool for about three songs and then got incredibly redundant. Yes, surf rock-meets garage rock-meets punk, got it. They have a lot of bizarro hipster fans who promptly took off (clearly to find the next shitty trend before it happens) right after their set leaving an even emptier room for Fucked Up. By the way, Waaves bassist looks like a chubby Sammy Hager.. which might actually be a current Sammy Hager. I just thought that was worth pointing out as it was the most notable thing about their set.
OK, so Fucked Up get on and proceed to just light the place on fire, regardless of crowd size, blazing right through the entire A-side of "David Comes To Life". I have to admit, screaming along to "Under My Nose" and "The Other Shoe" made this whole awkward trip well worth it... the cruddy weather, the weird setting, the fucking $21 door price. Both those songs have been knocking me on my ass all year. Damien's awesome between song rants about old-school Buffalo punk and making a Mt. Rushmore of Buffalo featuring Doug Flutie and Scott Vogel were pretty hilarious. They knocked a couple out from "Chemistry.." and maybe only one or two songs from "Hidden World", as well as "I Hate Summer" to raucous enthusiasm. Even the older favorite "Baiting the Public" was brought out. They closed things out with "Police", which naturally drew some pretty wild crowd antics. I gotta hand it to them, even in a less than perfect atmosphere Fucked Up really knows how to kick out the jams and put a smile on my face.

GOD EQUALS GENOCIDE / LIBYANS split 7"
This is my first time hearing Libyans and right off the bat I wasn't crazy about it. Yet once they got to the second song I was a little more into it. Three songs here that go by really quick. Their style is a hyperactive punk rock with female vocals and strange bursts of melodic craziness and some rather inspirational politicized lyrics. It kind of reminds me of that rather short-lived Boston band Convulsions, except faster. God Equals Genocide is kind of like genocide on my ears. They're like a way crappier version of Libyans. I'll admit, some parts are a bit catchy, but overall it's like that style of hobo anarcho-punk that involves a broken acoustic guitar, some dude hitting a can for rhythm, a bad vocalist, and a dog somewhere in the mix. And I really can't stand stuff like that. So yeah, take that style, plug it in, and garage it up a bit. I suppose that's kind of a step in quality? But I still don't really care for this. (Shock To the System/Dirt Cult Records)

GREY AREA/ GO RYDELL split 7"
So apparently Grey Area is a band again and this is their first new material in about 10 years. They sound exactly the same as they did back when too. It's alright, not really my bag, but for dudes who do the really melodic fast punk thing, and actually sing for real they do it well. No half-assing, auto-tuning, radio rock posing as punk, they have it down legit. It's like Token Entry, but a bit more safe. Go Rydell is on the flip and I hope they have a solid mailing address for Dan Yemin because they're going to start having to send him royalty checks for all the Kid Dynamite bits they're ripping from him. Everything about this (even down to the clever song titles) has the KD stamp all over it, just not as good. To some people that will be fine, to me it's a little too close to plagiarism for my tastes. (Black Numbers)

LUTHER, "Siblings and Sevens" LP
I'm not sure why I thought this (because I knew I would be wrong), but the cover of this record is really simple and kind of weird and makes it look like this could be some scathing noise rock terror unit, worthy of inclusion in the ranks of AmRep or Reptilian Records roster. Sadly, this is not the case. I'm also not quite sure why this band has the 't' in their name lowercase, almost crucifix-like? Again, it looks kind of cool, but then when you actually hear the music I honestly wonder if they are a Christian rock band or something because this is pretty middle of the road rock music. You could stretch for a punk background and say they sound a bit like the Replacements, but all in all, it's rock. That's it. No fancy subgenres or anything. The next to last song has an almost Pixies guitar tone to it, which is kind of nice. Other than that I really have nothing else to say about this record. Oh yeah, it's only 7 songs so I'm not quite sure if would be an LP or more of an EP? (Black Numbers)

PUNCH, "How Nothing Lasts" 7"
I'll take what I can out of Punch. They hit the East Coast maybe once a year (and never anywhere close to home anymore)and they're a whole lot of fun to see live. So I'm just imagining how apeshit people are going when they hear the seven new songs they crammed onto this little 7". Amazingly, there are a couple songs on here that nearly break the two minute mark. Yes, a few tracks here bust out near youth crew parts, but who cares when blast beat powerviolence attack-core ninja kicks you in the throat the rest of the time. Lyrically things are still written rather subpar, though the subject matter is always cool and the scathing, screeching vocals fit perfect with the music. They are definitely one of the best parts of this group and make the music that much more fierce. I'm digging the lead off track and the awesome fake stops in "The Chase" the best on this record. Get fast suckas. (Deathwish/ Discos Huelga)

RESIST CONTROL, "Dissipation" 7"
Something is very different between this Buffalo bands demo and this record. They're basically a grindcore band now. When you can squeeze 11 songs onto a seven inch it ought to raise some flags. Thankfully the vocals are decipherable and clearly cut from the hardcore cloth. Meanwhile, the bass drum is compressed as much as humanly possible to have that weak clicky sound and definitely emerging from more of a death metal sort of background. I'm not sure if that's what the band has intended, but to these ears it's kind of a mixed bag. This sort of reminds me of that old Relapse band Benumb. Does that mean anything to you? Probably not. (Shock To the System/ Feral Kid Records)

SOKIA PISTE, "Oire" 7"
This band is from Finland. I don't know what their name means, and I also have no clue what their lyrics are about because it's all in Finnish. That being said, the music sounds pretty killer. It's raw and dirty punk hardcore, with a pretty unique tone to the guitars. For some reason I'm reminded of really old Nirvana stuff when it comes to the way this was recorded and the tones they get. Musically, it's a bit more fierce with vocals that range from screamed to kind of singing. Three jams to kick you in the face. (Peterwalkee Records)

THOU, live- Syracuse, 10.4.11
Louisiana's Thou are one of the more intriguing sludge bands I've heard in the last year or two. Generally, I'm quite hit or miss with bands of this nature because they can simply drone/feedback forever and it can get boring. Thou definitely write slow songs, often recalling the dirty nastiness of groups like Eyehategod. but I finally figured out who they remind me of the most and that is Canada's long lost doom merchants Ire. I fucking loved Ire near the end. Long involved sludgy doom that had some important shit to say in their songs, wrapped around well thought-out riffs and throat-ripping vocals... as well as frequent Nirvana covers... played really slow. Thou are a lot like that and I was stoked to see them come to my town and play on a Tuesday night to a good crowd in a tiny room. Local vegan warriors Hunger Pains opened and filthied up the room (and nearly set off fire alarms with some fireworks thrown into the crowd). Black Throat Wind came next. Since downsizing to a single drummer the material they've written- long, involved, melodic, jammy, but still something all their own- has been pretty good. The older songs, that were written with a second drummer, don't sound as powerful as they did and I think they need to flesh them out a bit more or drop them altogether. I'd rather they kept them, personally. I like those songs. Finally, Thou came on and immediately knocked me the fuck over with how low and heavy their tones are. Seismic shifts in the floorboards gave way from gigantic riffs. Most of the songs they played were from splits and other hard-to-find records (and not their full lengths), minus "They Stretch Out Their Hands"- with its insanely awesome Crowbar type riff carrying the first section of the song- from their debut "Peasant". Whatever the case, it was all awesome, and all heavy. Sadly, no Nirvana covers though.
Posted by Hex Records at 8:47 PM