Read on all ye who enter here. I figured I'd throw in some reviews of some stuff that arrived at my doorstep before getting on to an end of the year list thing (which I'll do in another week or so). Behold these offerings, and take heed to what I have to say about them. 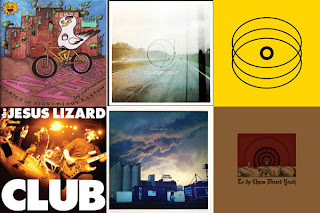 "AWESOME FUTURE: STORIES OF VICTORIOUS ACTION", by Robnoxious
The last thing this fella released was some pretty weird stories/comics and this is no different. You get some fairly entertaining tales of his family moving to Alaska via school bus when he was a kid, to the story of a dog's day as seen through the eyes of the dog, to a spiritual Buddhist retreat to relieve stress. On the more bizarre end of things we get a brief how-to on taking a proper shit (squat, don't sit). Honestly, the strangest part of this zine is the artwork. It's like pre-adolescent kids drawings mixed with sociopathic prison dweller. I'm not sure what to make of it all. (Microcosm)

CIA MAKES SCIENCE FICTION UNEXCITING, THE #6
This particular issue of this conspiracy-theory themed zine focuses its lens this time on Lee Harvey Oswald and the utterly confusing litany of events that led him to being pegged as the guy who pulled the trigger on Kennedy. This zine has always tackled compelling topics that are not easily explained, but it has consistently failed to do so in a way that doesn't further confuse the issue. I can appreciate shedding light on things that others try to bury, but hey, at least do it in a way that compels one to look further into it instead of confusing readers to the point where they wish it got buried forever. This zine makes Oswald look like either a flip-flopping idiot, or a complete schizophrenic who changes his mind like the wind blows. On one end he has a master plan, on the other he bumbles his way through all sorts of wild adventures seeking attention, eventually stumbling into the business end of Jack Ruby's pistol. And in the background it appears there is a watchful government ready to set him up as the patsy who takes the attention off of however many different shady organizations who really pulled the trigger on JFK. Is that what the author was going for? That's what I read anyway. Confusing? Yes. But the whole ordeal from beginning to end no matter what version you read is pretty damn confusing. (Microcosm)

COUNTERPURSUIT, s/t
The first proper full legit full length from this Syracuse band that only took a good year of intense OCD-style scrutinizing over every minute detail of the mix before being unleashed on the public. It works in their favor though I guess because this sounds great. How can I properly describe this band without sounding too ordinary? Upbeat rock music puts it out there in broad strokes. A bit more specific would break things down into a range of influences that seems to include everything from King Crimson to Cheap Trick, to XTC, and about every J. Robbins band to ever exist filtered into intelligent and well-thought out songs. The only exception being "Gus", a track found later on that has a decidedly heavier rock feel akin to Far or Texas Is the Reason (and bringing it closer to home a nod to Syracuse's former mainstays This Afternoon). It's actually my favorite song on here, though quite a bit different than what you get on the rest of the recording. Nevertheless, a great first official effort (self-released)


FRODUS, "Soundlab 1" 7"
I know this has already been out for a bit, but I was really into Frodus when they were originally around so I felt it worthwhile to write something up about this reunion 7". It really remains true to the Frodus people knew best- the spazzy and uncontrolled-sounding punk band from DC. Commonalities abound to groups such as Nation Of Ulysses, but perhaps with a tightness that gives the illusion of unhinged chaos, but in fact, has their spasms down to a science. This is far more in tune (and could basically be unreleased tracks from) their most well-known record, "FCI" as opposed to the more refined and introspective "We Washed Our Weapons..." swan song. Two songs, both pretty blasting make this 7" worth picking up. (Lovitt)


JESUS LIZARD, THE, "Club" 2x12"
I realize I probably reviewed the DVD version of this show captured on the bands reunion tour from 2009 and likely verbally jacked off to it. Well, this LP is no different. Two 12" slabs of wax documenting the same show as the DVD, but with better audio quality I suppose (my TV speakers suck). Finding the band just as tight, coiled, and springing forth with raw energy as they were in their heyday these old farts bring it like no other. This is why they are easily one of my favorite bands ever. Whether it's David Yows between-song off-color humor, or his desperate howls/shrieks/blathering in the songs, or David Wm. Sims surreptitious bass rumbling, Duane Denisons sinewy guitar work, or the polyrhythmic drumming of Mac McNeilly there is no stopping this band as they barrel through about 20 songs. Basically, their whole catalog is represented with a few songs from each record and I couldn't be happier. If you're at all curious about how a live band ought to bring it get this and see how a group can take 10 years off and come back just as hard as ever. (Chunklet)


NIGHTLIGHTS, "So It Goes"
I'm at the point where any record that bears the Eulogy Records logo on it is an instant turn off because I know it will more than likely be total garbage. Victory may have them beat for now, but this label tends to draw some real bottom-of-the-barrel crap and shits it out usually in the form of terrible beatdown mosh nonsense. So it was really weird to see they took a left turn and released this record from a band that takes about as many cues from later-era Hot Water Music as they possibly can. I guess that's not such a bad thing, but then again, it's already been done... so what's the point? The silly song titles don't really save it from being above mediocre. Musically it's decent, nothing to write home about (though I guess worthy to write a review about). And maybe the label is doing itself a service by releasing something palatable for once. (Eulogy)

PREVENGE/ DIG IT UP split 7"
Here we go- two punk bands that can play catchy pop-punk inspired hardcore and actually have a weighty set of balls in their collective trousers! Prevenge are the better of the two I think, and a bit more catchy in their approach. Both groups have a raw dirtiness to them, but know how to dish it out in spades. I can back these bands and this record. Comes in a fancy package complete with a big booklet with some wild artwork inside. Well done! (Pavonos Records)

"SO RAW IT'S DOWNRIGHT FILTHY: A RAW VEGAN COOKBOOK", by Joshua Ploeg
Points to the author for having fronted Behead the Prophet No Lord Shall Live, and for being a funny-ass dude. But while this claims to be a cookbook it basically only qualifies as a short zine. Additionally, 'cookbook' is sort of a misnomer seeing as this is for raw recipes and no actual 'cooking' ought to be taking place. Amirite? Still, I do not adhere to the raw regimen in my vegan diet, but I'm down to check what's out there and I have to hand it to Josh- he's come up with some really strange recipes, combining a lot of things I would never think to put together in new and interesting ways. Most of these recipes involve coconut so I will never in 1,000 years try them. But others give me ideas on how to tweak them my own way and put a spin on regular things I make. In that respect, as a conduit for further creativity, this succeeds. And if you're into the raw diet thing this zine will probably give you some ideas as well. (Microcosm)


THOU, "To the Chaos Wizard Youth" 10"
Can this band do no wrong? If you dig having your hearing ruptured by slow, agonizing and ungodly heavy music Thou is the place to be. Apparently, this was recorded at the same time as their most recent outing "The Archer and the Owle", but this takes a much heavier, more dirgey approach, complete with lots of noisy feedback, guitar strings flapping around from how low they are tuned, and a B-side that has the band playing at their most upbeat I've heard since "Tyrant" (which is still just a shade below 'mid-tempo'). They are this decades Ire, for lack of a better comparison, but in a class all their own. I feel like I'm being crushed under the weight of life every time I hear this stuff. Truly awesome. (Howling Mine)

WILD, THE, "A Collection"
I'm at odds as to what to think about this. OK, here's the basic description of band: jangly campfire rock with lots of harmonica, a stack of Woody Guthrie recordings, and a desire for social change. Fair enough. Typically, when it's a decidedly punk band doing this I really hate it because bands of that ilk are usually not very good at all, really smelly, and have that 'spare some change/good vibes' Plan-It-X thing that really irritates me for no particularly good reason. But when bands of this sort do not really associate with punk, and are talented I tend to think they are quite good, though not anything that I would find myself listening to. So my issue is this- I think that The Wild do most certainly consider themselves 'punk' and are also quite good at what they do. It seems a discrepancy that should not exist in reality. So I'm left to feel as though I back what they do, they do what they do well, they have a catchy way of providing social commentary, but it is a style I do not really care for. (Asian Man)

WILD, THE/ RUN FOREVER split 7"
The Wild.. well, see above. Harmonica punk. Run Forever are more or less a rock band who happen to enjoy punk music from time to time. These are bands I think I appreciate more from looking at all the political literature they leave on their merch table as opposed to the actual music they play. And it's true. I saw this group at Fest for a bit and had a nice discussion with one of them about the vegan lit and Occupy Wall Street pamphlets they had at their table, as well as DIY run spaces and was completely disinterested in the music they played. Good intentions nonetheless. This particular split comes with a nice little zine that both bands created and has quite a bit about the importance of DIY spaces, and all ages venues. (Solidarity Recordings)
Posted by Hex Records at 8:59 AM