It's been a solid two months (I think) since I last added some reviews. Well, here they are, for better or for worse. It's been a rather slow Winter thus far for new stuff that I like. But I'm thinking that's all going to change soon since a new Unsane record is right around the corner. And as Winter slowly thaws into Spring the travel bug will catch me, and find me driving all over the place to see stupid obscure bands that I have lonely obsessions with. And with those travels come new things to listen to, and (occasionally) words to write about them.
To give an idea of my compulsive music nerdery, I had a dream the other night where I was in a cafe with two well-known/respected punk dudes, who are vary active in different ways to this community. I went into a very detailed and thorough (even for a dream) analysis of why I thought American Nightmare was nothing special whatsoever, and they agreed. It was pretty weird. Especially how specific I was in my dream. It was like I was giving a review, and maybe prompted me to get my ass in gear to write these reviews. In reality, American Nightmare is alright. 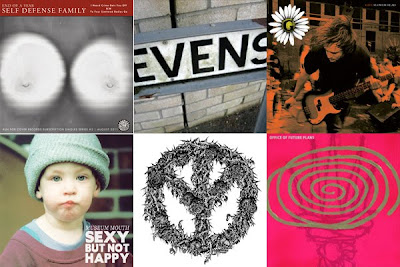 DREAMWHIP #1-10 collection, by Bill Brown
Before GPS, MapQuest, and whatever technological doo-hickeys that made paper maps nearly obsolete a guy gets in his car and drives all over a good chunk of North America and documents it in zines. These initial issues of Dreamwhip zine (which, I'm guessing has gone on for a good 15 years or more, and has racked up over 20 issues at this point) paint a stunning picture of lonesome coffee shops in the middle of Nebraska, yearning for some sense of meaning in a cornfield in Iowa, taking a walk down a sleepy street in Nova Scotia, and finding one's way around the streets of Vancouver. The authors home base of Lubbock, Texas is more of an afterthought than anything else, seeing as he rarely spends any time there before hitting the road again. Reading this is like listening to a Boys Life record put to paper. The simplicity of it all says volumes, and that's always a good sign. (Microcosm)

END OF A YEAR SELF DEFENSE FAMILY, "I Heard Crime Gets You Off" 7"
This record is intended as part of a subscription seven inch series, but some copies were released outside the subscription so I had to get one. Basically, I will always be intrigued by everything this band does, no matter how weird they get. Lately, they have created a lot of songs that revolve around a catchy lead, simple song structure, and Pat's clever lyrics. Their former association with DC Revolution Summer style punk is pretty much all but gone, and stripped down quite a bit. The A-side is humorous and involves a chorus fit for a Kraftwerk song. The B-side is a slower song and a bit more involved lyrically. I dig 'em both. Plus, the record cover is a pair of boobs pressed against glass. Enjoy. (Run For Cover)

EVENS, THE, "Warble Factor/Timothy Wright" 7"
So Amy and Ian- the duo behind The Evens- dropped out of things for about three years, had a kid, and now return to deliver a new 7". I really thought they had maybe packed it in and stopped doing the band, but I suppose childbirth has a way of putting the brakes on most other activities for a while? Well, if you were a fan of what they have done in the past (their two full lengths are most excellent) than you will most likely enjoy this new offering. Of course, I also wish for a new full length and perhaps some Northeast shows, but one can dream can't they? I personally enjoy the B-side a bit more, though both songs have the groups' great sense of melody, coupled with the unique combination of baritone guitar and subtle drumming. It's nice to see they continue to create wonderful music, here's hoping they get out live a bit more if they are able. (Dischord)

GIVE, "Flowerhead" 7"
In yet another of their similar-themed seven inches (each one features a live photo of one of the band members) DC's Give offer two more songs of total Swiz worship. Sure, that's an easy way to describe them. But am I wrong? They sound exactly like Swiz. And I don't mind it one bit. I feel as if they are an often overlooked group in terms of influence, so it's good to see a current band take cues from them and apply it their own music. The title track is better than the B-side here, and really stands up with any of their other handful of seven inches they've released recently. If they ever get around to releasing a full length, and it's not on Dischord, I'll be surprised. (Youngblood)

MUSEUM MOUTH, "Sexy But Not Happy"
In a weird way I am digging on this. There are bands similar to this, but I'm at a loss to say who they are because I do not usually listen to bands like that (read, whatever Pitchfork hype indie rock/punk band you will forget about next year). But here's some things I take from it: vocals sound like Alex from Lemuria, but with more reverb on them. The jams have that eclectic fuzziness to them in the same way Husker Du does, and tend to move at a similar quick tempo. The recording is rather lo-fi, and the leads bring to mind "Daydream Nation"-era Sonic Youth in that noisy/melodic sort of way. Most of the songs are a bit more direct though and easily digestible. It's a quality listen overall. (Museum Mouth)

OFFICE OF FUTURE PLANS, s/t
Any band featuring the vocals and guitar work of J. Robbins is going to be enjoyable. It's a given. He has such a unique style that only he can deliver, from Jawbox to Burning Airlines, to Channels, and now this. And if you know his style than you should probably dig this as well. He has also teamed back up with Channels (and former Kerosene 454- still one of the best bands to ever emerge from the 90's Dischord stable) drummer Darren Zentek with this new group. What is different than many other groups J. has fronted is the inclusion of a cellist here. So while this tends to be upbeat and rocking, the strings kick in to give another interesting layer to the music. It's hardly out of place, or cheesy. It slides right in and fits quite well. And, as always, Robbins uses his vocal talents to also include clever word play and some fairly (if I'm reading things right) socio-political lyrics, particularly on tracks "The Beautiful Barricades" and "FEMA Coffins". They are very well-written and stray from a typical 'damn the man' diatribe, to a carefully worded examination of a police state of things. Semi-conspiratorial, subtlety paranoid, well-sung, and playful all at the same time. It's a good record overall, though it doesn't quite stick with me the way some of his past work has. (Dischord)

RAILROAD SEMANTICS #1
I enjoy reading about trainhopping when the author describes the sights they see, the adventures they embark on, the people they meet, and so on. Ya know, a good tale of traveling freely as they wish. I don't particularly care for the junkies and alcoholics that frequent these stories, and I definitely don't understand trainhopping lingo (which is mostly technical railroad stuff and slang regarding it). This zine kind of balances all these things. It involves a short trip where the author goes out to Pocatello, Idaho, Eugene, Oregon, and Portland (and all points in-between of course). Idaho is just one of those places that I've driven through a couple times and never really stopped for anything. But something about the desolation and open expanse of the area make me sort of want to go exploring. So to read about the big open sky, the surrounding mountains, the little go-nowhere towns is pretty neat. Rounding out this zine is a bunch of train graffiti photos, newspaper clippings about trains (the workers, derailments, deaths, arrests, and a bit of history), and some hand-written letters to others. (Microcosm)

TRASH TALK, "Awake" 7"
I'm really liking the cover art here, but not as impressed with the music. There seemed to be a lot of hate for their last full length, "Eyes and Nines", which I can't understand for the life of me. I thought that LP was a furious and primal monster, both raging speed and riff-filled breakdown insanity. I honestly think people dislike this band simply because their fan base involves a bunch of weirdoes. I don't care. What they put on record (and how crazy their shows can be) is what appeals to me. Nevertheless, this new offering feels a bit tame in comparison. It's not bad, but it's a lot more straightforward punk overall. A few catchy choruses, almost consistent tempo throughout, and a little less rage. I'm not hating on it, it's decent. But I think I prefer the band a bit more unhinged like they've shown on past releases. (True Panther Sounds)

WAVELETS, "Athaletics"
I can't say I'm sold on this. I was never a fan of Cap'n Jazz, and current bands that milk that style don't usually do too much for me either. Algernon Cadwallader got better, Snowing has some decent songs, and this group sort of sounds like the leftovers of both those bands. Noodley, loose and fun, lots of sing-along choruses, sort of yelped vocals; but little in terms of actual memorable songs (at least to me) and a lot of goofy song titles make up this record. Nope, I'm just not a fan of bands like this 9 times out of 10. (Tiny Engines)
Posted by Hex Records at 5:54 PM