JANUARY REVIEWS FOR PEOPLE WHO ARE COLD

After a basically non-existent Winter last year 2013 actually feels like a real Central NY Winter.  So that means I'm bored, cold, somewhat depressed, and I leave the house pretty much only for work.  That leaves plenty of time to listen to records and be miserable.  Thus, there are kind of a lot of reviews this month.  When does it stop being dark all the time and Spring arrives? 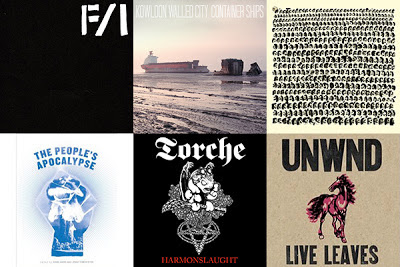 ANCHORS, “At the Bottom Of the World”
I thought this was the European straight edge hardcore band, back for more!  Alas, it was some other band with the same name that sounds quite different.  Seriously, in 2013 how hard is it to do a google search for your bands name to make sure no one else has it yet? Additionally, as things stand one might want to consider coming up with a name slightly more original as well.  All that aside, I put this thing on and was softly slapped across my jaded mug to about a dozen songs that all sounded like Polar Bear Club meets a bad power metal band.  It’s not something I’m terribly interested in re-visiting.  At least they play fast.  (Creator-Destructor Records)

BLOOD MONEY demo
I’m getting kind of an Eyehategod-meets-Majority Rule sort of vibe from this new Syracuse three-piece.  While that sounds totally awesome to say, consider it more of those two bands meeting in their own demo stages.  These tunes have a lot of dual strained shouting, the occasional awesome riff (the weird lead riff in the first song being the strongest), bursts of chaotic damage, and lots of droney feedback.  While some people are all about this style I have to admit doing the long and drawn out endings with really slow feedback-drenched riffs isn’t always my bag.  Blood Money makes use of this in a few of their songs and I tend to think it goes on a bit long at times.  But again, some folks live for that stuff.  Not a bad start though.

FUCKING INVINCIBLE, “Very Negative” 7”
Friggin’ fast.  Reminds me of the short-lived Louisville band Pusher in a lot of ways.  Basically, if a song hits two minutes than the band probably gets bored.  Fast part, really fast part, quick breakdown, and out. The sike-out at the end of “Anti-Tomorrow” is pretty funny, so they make up for it on the B-side with “Death Defier”, the closest they get to a slow song and that’s just because it chugs along so heavily.  I’m an instant fan of this.  Played really tight, really fast, really loud, and damn heavy too.  (Atomic Action!)

JOWLS, “Cursed” 10”
By the way the record is laid out one might think Cursed released new material titled “Jowls”.  It could be.  But it’s not.  This is the band Jowls, and the rest of the layout doesn’t really give any indication of what they have going on, other than possibly saggy faces.  Whether or not that is true Jowls do have a good thing going on.  Burly and chaotic, yet tight playing with some sense of melody…  it’s about as good as one can hope for under a banner of ‘screamo’, battling the shitty version that passes for music these days.  Think more Shotmaker and Torches To Rome with slightly more heaviness and groove.  Approved.  (TinyEngines)

KOWLOON WALLED CITY, “Container Ships”
East Bay sludge metal dudes return with a record that is actually a bit less on the heavy side and more on the contemplative end.  Yeah, that doesn’t sound good, I know.  But hear me out.  They still offer up a couple more upbeat songs, and those bowel-loosening sub-sonic tones are still present in the low end thankfully.  I won’t lie, I’m more of a fan of the ultra-heavy dirges on their last LP, “Gambling On the Richter Scale”.  It was so damn heavy.  But take that KWC you are familiar with and insert a sort of Hoover-meets-Neurosis vibe here and there and that’s not a bad thing at all.  No sir.  (Brutal Panda)

RESTORATIONS, “A/B” 7”
Two songs to satiate us fans until their new LP drops in the Spring.  Philly’s Restorations found their thing and have been rolling with it for a couple years now.  And man, whatever that thing is they got it in spades.  This really picks up right where their excellent LP left off.  They find a nice grooving riff and kick your ass with it, a nice melody on top of it, turn the whole thing into an anthem, those wonderfully gruff vocals, and then jam out the end so it all sounds pretty epic.  “A” is a bit slower and “B” is a bit faster.  Both songs are bad ass.  Keep it coming.  (Tiny Engines)

STEREO STATE, THE, “Crossing Canyons”
This is the sound of a sad, flaccid penis dry humping a cold, damp pillow.  Could mainstream rock be any more dull and predictable?  Am I listening to Nickelback?  Meh, who am I to criticize?  I thought Sensefield were the shit and they were totally wimpy radio rock.  But yeah, this just sucks.  (Creator-DestructorRecords)

“THE PEOPLE’S APOCALYPSE”, by Ariel Gore and Jenny Forrester
The cover has a raised Black Panther style fist with a mushroom cloud behind it.  The idea is to collect stories and survival tips about when the shit hits the fan it seems.  The result?  Not exactly.  There certainly are some good short stories in here outlining an end times scenario (the one about the Mars dust affecting the population was by far the best, with the animal uprising and basement apartment dwellers as the only survivors stories not far behind), as well as some general lists of things one might need in a post-apocalyptic world.  But there are also a lot of short stories that seem to have nothing to do with the end of the world.  They’re just general stories, so I’m not sure why they’re included in here.  Overall, pretty entertaining and a fairly quick read too.  (Lit Star Press)

TORCHE, “Harmonislaught” 7”
Back to the heavy with this one.  I may be in the minority here, but I’ve always enjoyed Torche’s EPs as opposed to their full lengths.  I felt “Meandrathal” and “Harmonicraft” had some good songs, but some filler too.  Yet, basically everything on “In Return” and “Songs For Singles” (which is arguably an EP) I feel is golden.  So, this new 7” offers two slabs of down-tuned musical concrete and both are winners.  “Harmonislaught” brings back the bomb string for pretty much the entire song to great effect.  The flip side, “Rock N’ Roll Mantasy” gives us a bit of current Torche, complete with an interesting lead and a bit more upbeat, but still on the heavy side of things.  A great single from an awesome band.  (Amnesian Records)

“UNSINKABLE”, by Robnoxious
Here we have a zine/small book about a few folks who decided one day to build a pontoon boat out of scrap and sail it down the Missouri and Mississippi River.  They literally used scrap wood, junk, buckets, and other random shit and made an 8’x20’ boat for under $100 and sailed it for about 250 miles.  They took a couple months to go all that distance too.  Nevermind that the same distance could be travelled via automobile in about 3 or 4 hours.  The book is broken down into the mechanics of how they built their craft, and then journal entries of the strange times they had with river life dealing with twisters, downpours, mud, floods, the little towns they came across with small town people, and being savage crust punk hippies who I can only imagine smelled to high heaven after a month of living on a shanty boat with nothing but beer and wild forest berries to feed them.  Not a bad story overall.  My only question-  why on Earth bring a dog with you the whole time?!  Why would a dog want to hang out on a tiny boat with three other people for weeks on end?  That just seems cruel.  (Microcosm)

UNWOUND, “Live Leaves” 2xLP
Unwound, who hailed from the Pacific Northwest and have been split up for over 10 years now, were what I felt were the perfect combination of post-hardcore’s burly groove and Sonic Youth’s noisy inventiveness.  By the time they released their final album, the wonderful double LP “Leaves Turn Inside You” they had transcended easy-to-place labels and really came into their own with longer winding songs, weird textures, occasional keyboards, and just general awesome songs.  I’m a bit more of a fan of their previous LP, the slightly more rocking and grooving “Repetition”.  But I digress.  This double LP, just released, documents live recordings from various stops on their last tour where they played as a 5-piece (as opposed to the three-piece set up they’d had for their whole existence).  The record(s) consist mostly of “Leaves…” material, with a couple covers and the classic “Corpse Pose” (probably the most well-known track off “Repetition”) thrown in for good measure.  The sound quality on most of these recordings is pretty decent overall, though could use a little work in some areas.  Apparently, these recordings were kind of rough and took a long time to get a good sound out of.  For the Unwound fanatics out there this would be worth your time to check out.  Comes in a fancy cardstock sleeve with a screen printed cover.  (Kill RockStars)
Posted by Hex Records at 2:09 PM