THINGS GET REVIEWED FOR AUGUST!

A pile has stacked up and I have written about said pile.  But in order to cram all that stuff into one post I'm keeping most of them generally short and to the point.  Of course, there's a few I just couldn't shut up about, so take heed and read on. 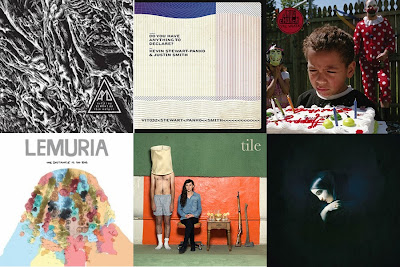 ALL PIGS MUST DIE, “Nothing Violates This Nature”
Is it a bad thing that between this band’s last record and this one nothing has really changed?  I mean, they just keep destroying me.  I’m like France, I just keep surrendering.  Boston dudes show a love for Entombed, Discharge, and smatterings of black metal speed, tune down, and blast your face off for a good half hour of nothing but disgust for humanity and a bleak outlook on everything.  Crazy beautiful artwork, unnecessarily difficult to read text.  Grind and punishment.  (Southern Lord)

“DO YOU HAVE ANYTHING TO DECLARE”,  by Kevin Stewart Panko and Justin Smith
A Canadian rock critic writer and regular roadie teams up with an American musician and label owner to write a book about bands trying to cross the border.  Well, they’re not so much writing it as they are relating other bands tales of border woes and triumphs, and occasionally interviewing them and each other.  See, for some reason, crossing between the US and Canada is typically a breeze if you’re in a car.  But the moment bands in vans try to cross it suddenly becomes an international incident comparable to smuggling uranium.  Why this happens, no one knows.  The writers hope to ascertain this.  Instead, they mostly get lots of wild tales from bands mostly of the metal and hardcore persuasions.  Some times it gets very redundant (some of the same people relate their tales repeatedly), but overall it’s really entertaining and will make any band thinking of playing outside the borders think twice before they decide to forget their passport.  Typos abound, get an editor.  Read anyways and beware the latex glove.  (Vitriol)

DRUG CHURCH, “Paul Walker” LP, “Your Life…” 7”
I’m a 90’s sort of guy and I can’t pretend I’m not.  Drug Church seems to have been specially catered to the demographic of me.  Cynical Drowningman-esque song titles?  Check.  Snarky vocals pertaining to a lot of white trash and shitty suburban go-nowheres with catchy choruses of “Crush ambition!” and “You get less because I need more!”  Check.  Chunky, thoughtful, and considerably rocking post-hardcore with melodic nods towards Seaweed, Farside, and later-era Snapcase?  Oh, big check.  The LP is excellent through and through and hard to pick a favorite song (maybe “Clifton Country”, maybe “Attending a Cousin’s Birthday Party”).  But the 7” is a great one-two punch of a pair of heavier leaning songs and some of the ugliest artwork I’ve ever seen on a record.  (LP on No Sleep, 7” on Secret Voice)

HERO DISHONEST, “Alle Lujaa”
Cult of Ginn lifetime members here, Finland chapter.  The A-side goes at two speeds- fast and faster.  Side B has that whole “Process Of Weeding Out” feel to it.  All the songs are in Finnish, but rejoice, the fun and twisted lyrics are translated into English as well.  Black Flag style hardcore in the lively fun way, and not as much the hateful, spit-on-the-crowd way.  I actually can’t imagine Finnish people being mean enough to want to spit on others anyway.  (PeterwalkeeRecords)

JAPANESE FURNACE demo tape
Hard riffs, pure noise recording.  Is it possible for deconstructionist basement hardcore to not only sound like harsh noise, but to also sneak in primitive beatdown riffs as well?  You be the judge.  I can’t get over how the layout on this tape looks like a Discordance Axis release.  Get grimey.

LEMURIA, “The Distance Is So Big”
Lemuria have been at it for quite awhile at this point, and in that time their song writing remains the same- clever and quirky indie rock with some nods to pop punk.  The real changes are a greater focus on the vocals and using them as more of an instrument, especially with drummer Alex Kerns and guitarist Sheena Ozella collaborating more and more, instead of only one of them handling each song.  Another noticeable change is the production getting cleaner with each recording, moving away from being a little rough around the edges to being very crystal clear.  I like it.  A great collection of more awesome and catchy songs.  Get awkward and embrace it.  (Bridge Nine)

PHANTOM GLUE, “War Of the Light Cones”
Boston sludge masters return with a second LP filled with more of their depth-charge riffs and low-end rocking.  I have to say their first LP was a bit more memorable, but this one has a nicer recording/production on it.  Same ugly artwork at work again on this LP.  Looks like one of those first year of college, ‘finding my style through abstraction’ pieces that you hide in the attic years later and cringe over.  Musically though, pretty heavy.  Worth a listen.  (Black MarketActivities)

POOR LILY, “Vuxola”
The band’s name suggests they have a contract to gig weekly at some singles bar and that, any day now, they’re going to ‘make it’.  Their sound is probably too weird for that though.  It’s a real punk mish-mash of stop-start riffs, odd timing, some Jello Biafra school of nutty vocals, and old school NYHC punk.  I bet it’s fun for them.  As for me I’m not really moved by it.  (self-released)

SOKEA PISTE, “Ajatus Karkaa”
Another band out of Finland doles out a new record, which is more of an EP anyway.  In fact, it’s a re-issue of a 2011 recording.  I remember their last (most recent) offering as being a lot more raw, punk, and fast.  This has a heavier vibe to it, fairly beefy tones, and a little slower delivery.  It’s  still pretty cool though.  Weird nervous artwork adorns the cover, dark punk pulls you in, and they even do a Die Kreuzen cover for kicks.  (Peterwalkee Records)

TILE, “You Had a Friend In Pennsylvania”
I want to make friends with this Pennsylvania band, but I’m afraid they might spit on me with their ugly sounds.  Let me engage you with sweet lollipop dreams where Floor (get it, Floor?  Tile?  Home improvement enthusiasts take note), Pissed Jeans, and old Melvins riffs snuggle up together to make sweet, sweet, sludgy noise forever and ever.  Sounds like a fantasy land for noiseniks huh?  Yeah, well, I’m enjoying the shit out of this record and I implore you to do the same.  Killed by riffs.  (Limited Appeal)

TRUE WIDOW, “Circumambulation”
I don’t indulge in drugs, but if I did, this would be the perfect record to sit on a porch on a nice breezy day in a rocking chair and smoke a joint…  neighbors hoighty-toighty opinions be damned.  You just relax to this and take in the tones of the guitars, the deep lean pulse of the drums, soothing vocals, and fuzzed out bass.  True Widow are a sort of stoner rock band, leaning a bit on the shoegaze side of things.  While their past albums have felt a little fuzzier, a bit heavier, this takes a decidedly more minimal relaxed approach.  I have to say I’m fan of past efforts more, but this one ain’t too shabby either.  Now to go sit on my porch and think about life and stuff.  (Relapse)
Posted by Hex Records at 12:28 PM