I go away for a little over a week and all these killer new records just make it known they exist in a very loud and awesome way.  So I had already been listening to a few of them, and other ones I knew were coming to beat the doors down.  But yeah, did Spring end and Summer begin with a storm of great releases.  Those of the heavy, noisy, and weird variety making some waves for me.  So read on music junkies and behold the lot this time around. 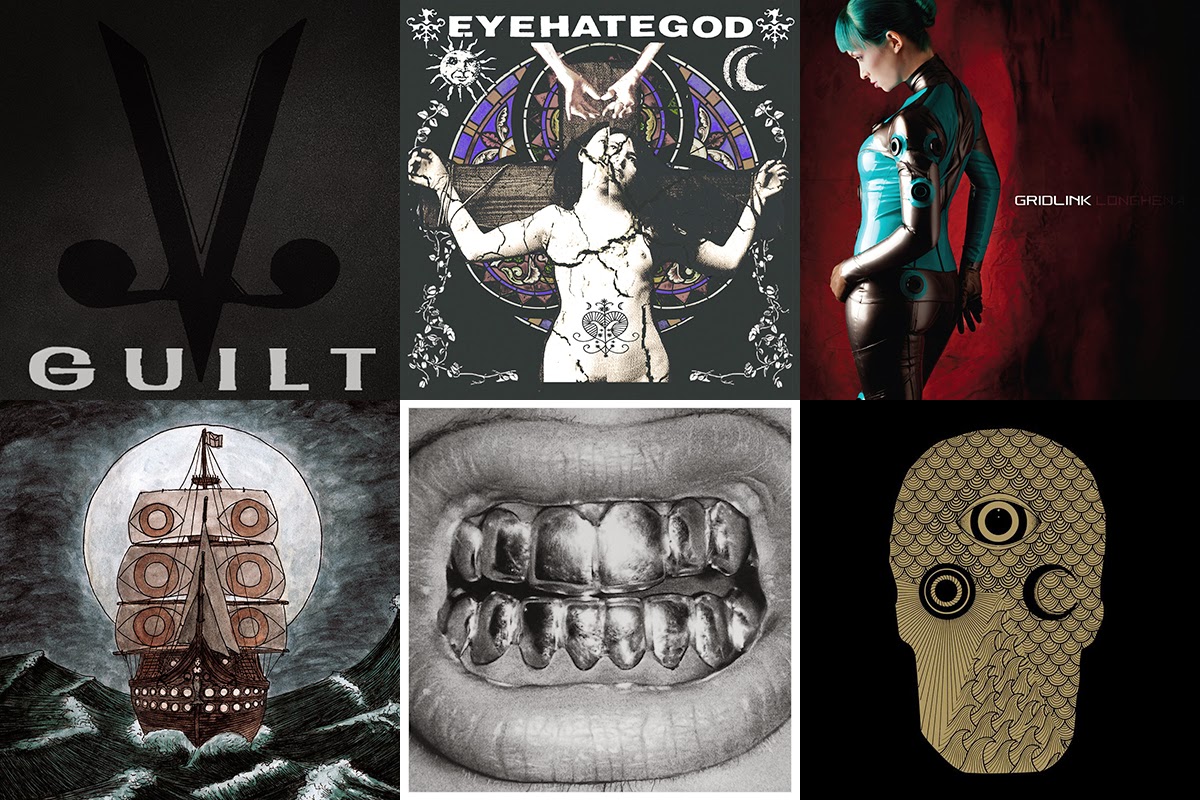 ANIMAL LOVER, “Guilt” LP
People around town kept telling me, ‘you’d love this band’, or ‘this is a band that’s right up your alley’.  Apparently, I have a type.  Well, I finally saw them, and they were right, I do like this band.  They were, in fact, one of the loudest three-piece bands I’d ever seen.  But not in that sort of grating, ‘this is actually punishing’ sort of way.  They had their sound so tight and dialed in, and then just cranked the shit out of it that it straight just pierced my skull.  Not a bad first impression.  Their newest offering “Guilt” is on LP, but it’s only 6 songs so it’s more of an EP than a full length, even though a few songs get kind of lengthy.  And that, I feel, is Animal Lover’s only downside- they tend to jam out a bit too much for a band that has very, very strong comparisons to Jesus Lizard, early Shellac, and Big Black (except with a live drummer).  Their thick, rubbery bass bounces around while guitars skree and grate over drunken yelped vocals…  yeah, I can get into that.  Fuck, even this album is really loud.  These dudes really know how to make a hell of a racket. (Learning Curve Records)

AS YOU WERE #3
Another edition of this semi-new and very awesome comics anthology.  Most of the contributors this time are the same as the last issue, most of them being pretty awesome, a few being total duds.  The theme of this issue is ‘big changes’.  So each artist interpreted that as they saw fit, from comics about punks becoming parents, to simply going from being into one type of music to another, or one’s dwindling frequency of attending shows due to adult responsibilities.  Heck, Liz Suburbia offers a literal interpretation by submitting a story about seeing a band whose music is so gnarly that she literally changes into a giant wolf that consumes the Earth.  The cover is by Lauren Denitzio and, honestly, I don’t get the adulation of her artwork.  This is basically a drawing of a bland living room (the exception being the Mission Of Burma record sitting next to a shelf) and her trademark use of newspaper clippings as a background.  Meh.  Good thing the contents on the inside make this worth picking up.  (Silver Sprocket)

AUSTERITY PROGRAM, THE, “ Beyond Calculation”
Two guys and a drum machine making a lot of noise.  Heck, they’ve been at it for years and are really damn good at it too.  The heirs to the throne of Big Black.  The make no qualms about their drum machine sounding like a drum machine and utilizing it as the machine that it is.  It gives their music a slightly industrial and robotic feel.  Meanwhile, they hoot and howl with grated guitars and nerd away in their studio bunker, making sure every little sound is fine-tuned and labored over to utmost perfection.  Steve Albini fan club charter members here.  Of all their output to date this is probably their best representation to date, and self-released on their own label.  (Controlled Burn)

EYEHATEGOD, s/t
I’ll admit that I have never been an exceptionally die-hard fan of Eyehategod.  I booked them twice- once was an awful experience where I saw their scummiest side upset my naive little brain.  The other was a pleasant experience that had them at their sunniest, apparently coaxed by beer, pizza, and meeting their desired guarantee with no issues.  I only have one of their other records and find most of it to be too fixated on the feedback and noise they love so much.  Yeah, I know.  It’s their thing so why should I complain about it?  Anyway, some 14 years later they bounce back with a fucking vicious slab of sludge filth that finds them at their absolute best.  I don’t know what switch flicked in my pea brain to find this particular record so godamned good after having a half-hearted reaction to the rest of their catalog.  The recording is stellar- it meshes the best parts of their scuzz-sludge noise assault with some harsh clarity to make for complete outlaw, scumbag music.  The band is totally focused and firing on all cylinders, whether it’s the opening punk-infused drive of “Agitation!  Propaganda!”, or the pained stop-start riff-fest of “No One Told Me”.  The A-side has a bit more kick to it overall than the B-side, which works the beaten-down, slow burn feedback downpour angle a bit more.  But whatever, I’ll take it all.  This is truly dangerous music for desperate criminals who have lost all faith in humanity, created by lifers of that exact same lot.  Damaging music.  (Housecore)

GRIDLINK, “Longhenna”
I had planned on reviewing this last time around, but forgot, which is stupid because this is a stupid good record.  So I’m a huge fan of “The Inalienable Dreamless” by Discordance Axis.  It basically sets an untouchable standard for just how weird, inventive, and fast grindcore can be played.  Their vocalist, Jon Chang, has a very distinctive style that I really admired (as well as a totally off-the-wall stage presence if you ever had the good fortune to see one of their rare live appearances).  That being said, he heads up this international grind unit and I’m naturally going to be interested in anything he does musically.  This is actually Gridlink’s second (and, apparently, final) record, which contains the core of his previous endeavor Haiyano Daisuki.  Again, super fast, very slickly produced, and full of wild guitar leads.  It’s like future music for ADHD-riddled video game freaks, minus any electronic elements.  Just the fastest music imaginable, minus any of the sloppiness or scuzz that accompanies most grind bands.  This is played by perfectionists.  So I still like Discordance Axis better but they’re different animals and this is, by no means, a bad turn.  It’s a fitting end to a good project.  (Handshake Inc.)

HELMS ALEE/YOUNG WIDOWS split 12”
So these two bands team up once again on a longer format?  Well, not exactly.  Ben from Helms Alee’s old band, Harkonen, did a split 7” with Young Widows previous incarnation as Breather Resist and the results for both sets current band produce similar results.  For Young Widows they are definitely an album band.  When they do shorter offerings (like 7”s or splits) I feel like they’re pulling from their pile of rejected songs.  It’s not to say the three songs they have here are not good, they just don’t have the heft and same thought-out execution of grand ideas (or as much pedal experimentation) they present on their LPs.  These songs are a bit more straight ahead and rocking than other material they have.  Helms Alee, though, knock it out of the park.  “Punchy Stabby” starts things off with a twisting and knotty riff that carries through this ripper.  “PAN” is next, and offers up the meandering and melodic side of the group, while closer, “Gas Giant” continues the meandering until a massive riff explodes from the ether and swallows the song whole ‘til it fades into oblivion.  The HA side wins this one.  A bit dismayed at the lack of packaging on this sucker.  Just a neat cover drawing, and no insert or info about the songs, recordings, lyrics, or otherwise.  (Sargent House)

HINDSIGHT, “Draining Satellites” EP
If I could call up the meme of the smiling dude with cornrows and add my own text, “I heard you like hardcore, so I put some hardcore in your hardcore to make it more hardcore” I’d place that here instead of an actual review.  It would get the point across.  These are some Pittsburgh dudes who are clearly having a good time revisiting their favorite memories of Trial and other mid-to-late 90’s hardcore styles.  I mean, just get a load of their name and their record title!  I lived through this stuff man, I know my 90’s hardcore worship when I hear it.  If this doesn’t turn your small t-shirt into an XL ringer than you’re not listening.  Regardless, they do a decent job of it, throwing down seven tracks of multiple breakdowns, lots of chugging rocking, and sing-alongs.  You will mosh.  You will (most likely) bleach your hair as well after hearing this.  (Hindsight)

PUP, s/t
Not since the 90’s have I been swayed to see a band or purchase their record based upon a music video as an introduction to their music.  Pup are my 120 minutes (or Headbangers Ball) moment of 2014.  Of course, both videos they have made (which are insane, by the way, look them up) are for two of the best songs on this LP.  Opener “Guilt Trip” rides a swinging beat with a wacky guitar lick looping over it and wild sing-along chants, while the next song, “Reservoir” takes a ripping punk rocker and inserts even more song-along madness to the mix.  From there it gets to be fairly consistent with songs like “Dark Days”, “Lionheart”, “Back Against the Wall” and “Mabu” all having a similar feel- upbeat punk, catchy riffs and licks, and sung/yelled melodic vocals and gang vocals.  Nothing wrong with any of that, but I like the songs where they’re going against the grain and doing something different, like “Guilt Trip” and the painfully beautiful and post-hardcore leaning “Cul-De-Sac” to separate them from the pack.  Nevertheless, Pup are a really fun band that take some of the more fun moments of Weezer and toss them into a blender with bands like Flatliners and Fucked Up.  (SideOneDummy)

YOUNG WIDOWS, “Easy Pain”
The A-side of Young Widows fourth LP may be some of the best stuff they’ve ever done.  Each of the first four songs is a separate, awesome entity.  “Godman” opens things up with a huge, crushing collapse of haywire intent moving at sloth speed.  “Cool Night” demonstrates how the band can take chaos and present it in a pretty and smooth way before Evan Patterson comes in with that closing epic guitar ascension while crooning “ease the pain” over and over.  “Kerosene Girl” picks up the pace and burns the house down before they’re even halfway through the record.  The first closes out with “Doomed Moon”, quite possibly one of my favorite YW songs ever.  It opens with a looped whisper of guitar, adding up until it’s a simple little whistle.  And then it just gets completely smashed by Nick Thineman’s pulverizing bass, turning the whole thing into a repetitive lumbering beast while Evan’s guitar abuse wails all around it with calculated skronks of noise tear through the mess (and that constant little background loop).  It’s quite incredible.  Not to say the B-side is a dud.  “Bird Feeder” might be one of their most sleazy-sounding songs they have written.  “Gift Of Failure” and “King Sol” are top notch additions to the band’s catalog, but add in a consistent way, and not necessarily as the pick of the litter.  All in all and great record that successfully combines the inventiveness and wild nature of “Old Wounds” with the moody and reserved weight of “In and Out Of Youth and Lightness” (Temporary Residence)
Posted by Hex Records at 7:15 PM