SUMMER KEEPS ROLLING AND SO DO THE REVIEWS

Somehow it has already skipped to August.  Yesterday it might as well have been February.  Where does the time go?  Oh, I know...  fiending over hordes of records in the never-ending quest for that perfect one!  But in all honesty, yeah, I listen to a lot of stuff.  Here's the latest batch, including a couple year-end contenders in that pile. 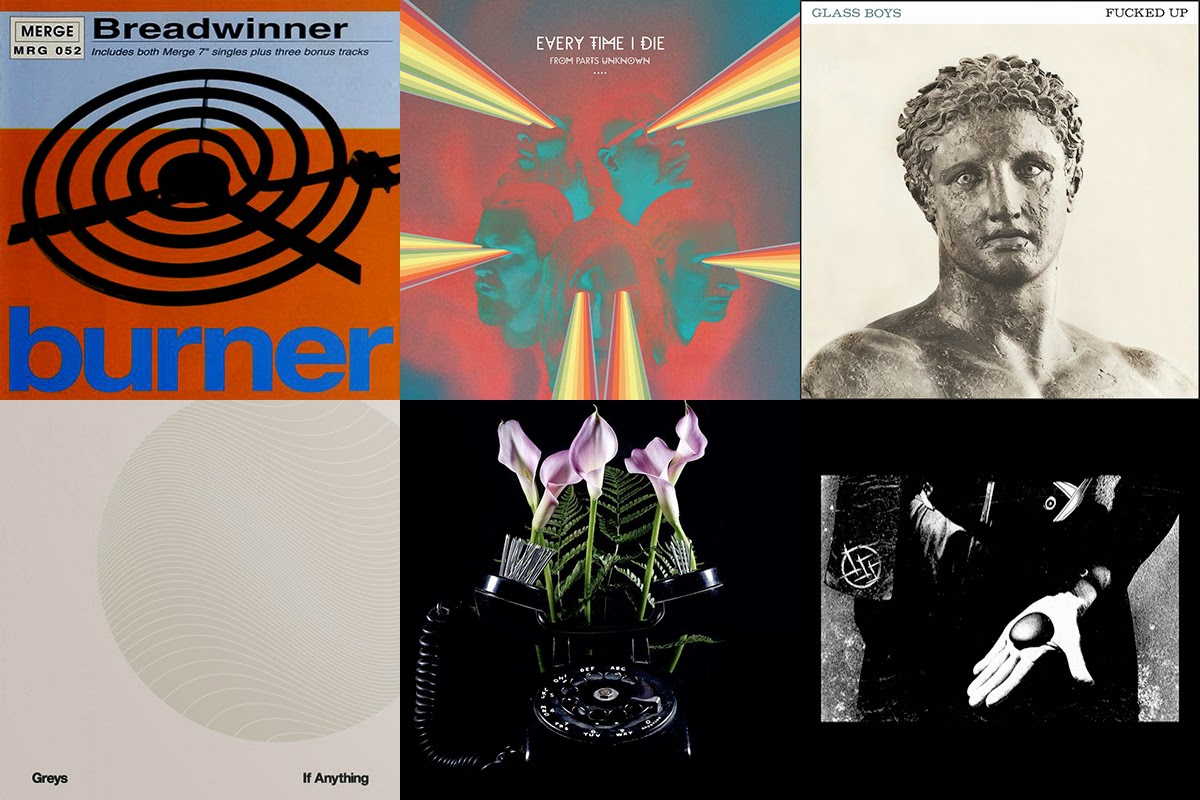 BREADWINNER, “Burner” LP
I’m a good 20 years late to the game here, but this re-issued LP collection from these early 90’s Richmond trailblazers is pretty wild when put into a historical perspective.  This was one of the harder-to-find Record Store Day releases this year, and not because it sold out quickly.  I think it’s more because most places didn’t bother to carry it due to the obscure nature of the band.  Breadwinner was a band’s band in the strictest sense and I say that because basically anyone who does talk about this band is a musician themselves and cites them as strong influences.  Their output was minimal (a couple 7”s), their tenure was brief, but in 1991 some brilliant dudes down in Virginia were mixing up mostly instrumental and metallic-leaning noise rock with math rock and serving it up to what I’m sure amounted to a small handful of dedicated noiseniks (as these things tend to go).  While listening to it now it feels a bit tepid, maybe not terribly adventurous, but like I stated earlier, when put into the context of this being done over 20 years ago, when styles such as this were quite nascent, it makes it seem like kind of a big deal.  Indie giant Merge re-issued this stuff into a cool package and it clocks in at only around 20 minutes, but worth investigating for the history.  (Merge)

EVERY TIME I DIE, “From Parts Unknown”
How does a band on it’s seventh LP keep things interesting?  It gets tougher with time.  ETID really brought back a raw, vicious intensity on “Ex-Lives”.  I’m not sure what it was about that record, but it’s some of the best stuff they ever did.  On “From Parts Unknown” it feels like some of that revived intensity is lacking and some of it feels rushed, though I will say that opening your record with the lyrics “blow your fucking brains out” over and over again is a pretty good way to start.  The first half is incredibly fast, and has the lion’s share of ripping cuts.  A-side closer “Moor” might be the most interesting song on the record, going with an obtuse piano thud at the beginning and end, which is fairly adventurous.  The B-side, though, accounts for a lot of filler.  The exceptions being the ending of “El Dorado” that summons up a massive Down-styled riff and Keith Buckley’s sing-along worthy chant of “crush your allies!”  (take that Hatebreed!), and “Idiot” with it’s harkening back to some “Hot Damn” styled riffy metalcore.  As always, Buckley, while occasionally overtly wordy, is a deft lyricist and comes up with some great wordplay.  Again, not a bad effort (the Mastodon-meets-hipster cover art is pretty awful though), and certainly an overall fun listen, but not the band’s defining moment.  (Epitaph)

FUCKED UP, “Glass Boys”
The first song has a great drum intro and could be a perfect sample for some late 80’s hip-hop group.  But “Glass Boys” doesn’t have the ambition or grand ideas put forth on previous records, even though the lyrics are excellent as always.  Also, this record is shorter overall from past efforts (some people would cite that as a positive).  The record is bookended by a couple great songs expounding on the query of getting to be an old punker and not connecting with youth the way you once did (I can relate).  J. Mascis lending back up vocals to “Led By Hand”, which sounds kind of like a Dino Jr song anyway, is the other great track on this record.  Still, there is a good deal of what amounts to filler on this outing.  At this point the only thing, soundwise, truly connecting Fucked Up to hardcore is Pink Eye’s gravelly bark.  It’s definitely their slowest and most abundantly melodic work to date.  But, I’m more partial to “Hidden World” and “David Comes To Life”.  (Matador)

GREYS, “If Anything”
So here’s an easy contender for record of the year for me.  After hearing snippets of promising material from previous hard-to-find releases Toronto’s Greys lays down a hell of an LP.  Imagine Nirvana covering Drive Like Jehu, getting noisy, raw, and still having a wild hair for weird guitar antics.  That pique your interest yet?  I know I’m stoked.  They have a lot in common with fellow countrymen in Metz in terms of sound and presentation, but Greys seems to put a bit more dynamics into their songs.  For an idea of how this band sounds I’ll refer to a great live picture on the insert of the record where a member of the band is riding his guitar like a surfboard on a stage monitor while another member kicks out the jams, a couple people in the audience cheering and smiling, and yet another person in the crowd holds his hands over his mouth agape, eyes as wide as dinner plates at the stage antics playing out before him.  That’s a sign of an awesome band and one hell of a kick-ass record.  Necessary.  (Car Park Records)

HERO DISHONEST, “Kaikki Hajoaa” 7”
You may listen to this and have the passing thought of what people who have no clue about hardcore music often think about this type of music- “you can’t understand what they’re saying!”  Well, yes, some of the vocals on this 7” are downright terrible.  But the dude is also singing in Finnish, so there’s that if you can’t figure what he’s yelling about.  The music is mostly straight ahead hardcore punk, perfect for basement stomping.  Some of it is mid-tempo, some of it is very fast.  I think the third song on here is a cover, and honestly, I think I like it the best. The rest does not really faze me.  (Peterwalkee Records)

MOUTHEATER, “Passing Key”
Another year-end favorite is rearing it’s ugly head to muscle in on other records vying for a spot.  Fuck those other records.  Moutheater have been cranking out grungy, dirty, mean-spirited noisecore for the last seven years or so and this is their first record in over three years.  I think it’s high time they once again secured their place at (or near) the top of the heap.  But what’s this?  There are several songs that dabble in catchy riffing and almost sung vocals that strongly suggest an older Queens Of the Stone Age influence coming on.  While it is a surprise I can easily hang with that, especially when the rest of this monster is doused in unabashed Unsane love and unstoppable face-mashing riffs.  If you see this band and you are not hurling empty beer (or other beverage) cans everywhere while punching holes into drywall you have seriously not listened to this correctly…  or you just have a lot of respect for venues.  At the very least you will think heavily about doing those things, and then later on you’ll set fire to a dumpster or something.  Get this now and play until it melts your turn table.  (Anthems Of the Undesirable)

SOKEA PISTE, “Valikasi” 12"
Dark goth-y punk.  It leans more on the punk than it does on Bauhaus, but I’m sure the love is there.  The entire record is sung in Finnish, but the lyric sheet has translations (the songs are about things punk-related…  for real) for us cretins who only speak a single language (and sometimes not even coherently).  Regardless, get ready for chilly vibes, driving punk nihilism, and a cold sense of melody on top.  These songs also feel a bit lengthy, but I guess that’s their way of pulling you in.  For one reason or another I’m sort of reminded of PiL, if it were a little more crusty and less refined.  (Peterwalkee Records)

SPIT SPEWING SNAKES, “Steady Sinking Stone” 7”
This Michigan-area band cranks out 5 songs on a single-sided 7” with some insane screen printing on the B-side.  I’m reminded of early Ceremony, as it’s nearly power violence speed, but still catchy and fun, while being aggressive and smart all at once.  For some reason they decided to do an AFI cover on here too.  I think that band’s for the birds, and I have no clue if SSS is doing their own version of it, but it’s really damn fast too.  This thing is packed with extra goodies (poster, stickers, good design, etc), so if you like your records to be more than music this is obviously a pretty good place to start.  (Dropping Bombs)
Posted by Hex Records at 4:15 PM