Before the annual 'end-of-year favorites' list is put forth (regular readers will probably be able to figure out a few of mine) I shall dispatch one last pile of reviews for you all to pour through.  Filled with many things Philly and 7" format it just sort of ended up that way.  But what better way to introduce oneself to a new band than through that tried-and-true format of the 45?  It's very little investment for something that could prove to be a doorway to something wonderful.  Heck, you all ought to go out and buy a few 7" records right now.  I know a guy who has a label that sells some. 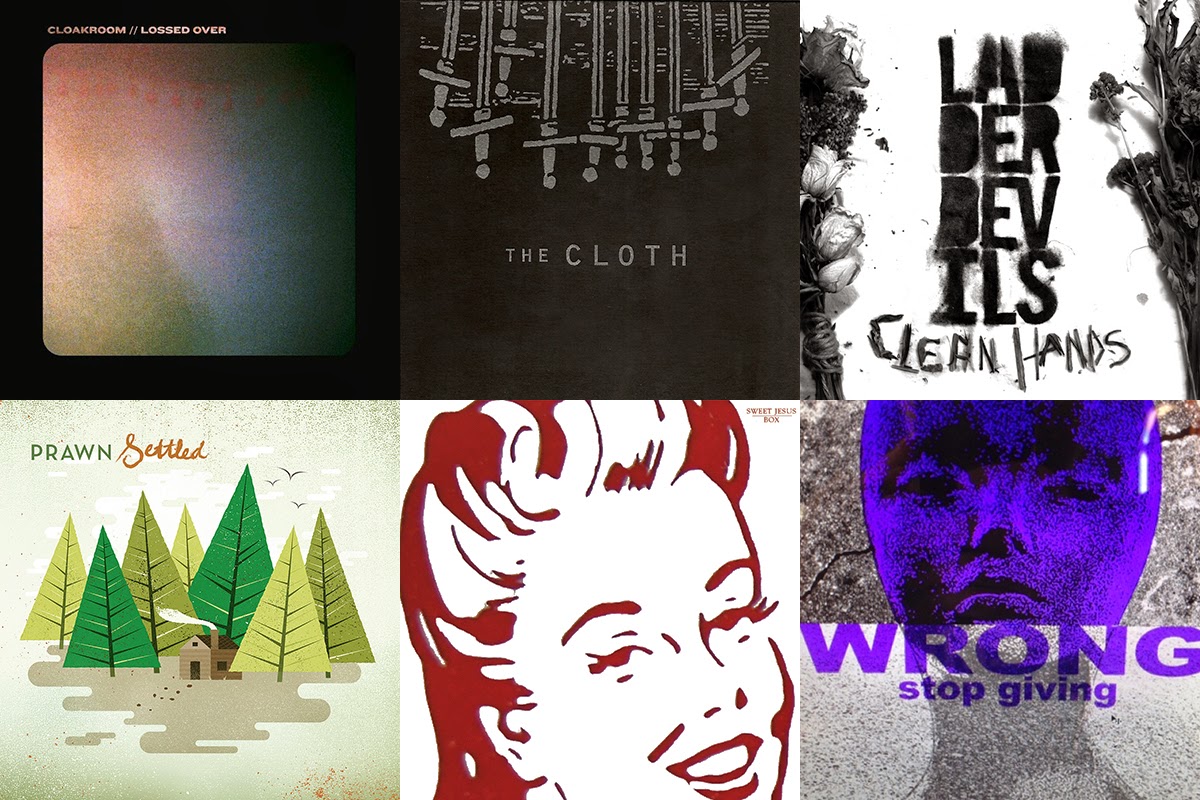 CLOAKROOM, “Lossed Over” 7”
From my understanding this group is sort of a side project of some other, more active, Midwest bands.  They released an EP last year and I remember hearing the first couple songs off of it and was very impressed.  And then not as impressed with the other couple songs on it.  Still, it was enough to keep me curious as to what was next.  And this is it.  I guess this is a teaser of sorts for their full length, as one of these songs is supposed to be on it.  First off, I think this band has a really cool name.  Secondly, I’m very much into their overall style of slow-core/sludgy shoegaze.  Sure, they meander a bit into some slacker melodies, but it’s sort of a soft crushing of the atmosphere and your cranium when the thick riffs are applied correctly, and I can get behind that.  The B-side has a song that engineer and Hum frontman Matt Talbott sings…  and yeah, it sort of sounds like Hum on downers with a big epic chorus.  (Run For Cover)

CLOTH, THE, 7”
First things first, bands that go all out with some sweet letterpress cover that folds up all interesting-like get a free pass.  That shit looks awesome.  Secondly, they got a song called “Freak Beach” that is under a minute and it slays.  The other three songs on this circular fucker aren’t too shabby either.  As if it weren’t evident I dig on noise rock bands and this group chops and hacks away at their instruments in a sludgy, noisy, grungy sort of way.  They take fierce stabs whether it’s throwing in some trippy Breather Resist-style guitar bending, or just hammering away at your face like KARP on an adrenaline rush.  Whatever the case, consider me pleased.  (Reptilian)

COURTESY DROP, “Stabilize” EP
Behind all the emo chill and pretty melodies comes a fierce wave that seems to punctuate each of the five songs on this Nashville (and part Rochester) band’s second release.  I’m not bowled over by what they do, and I hope it doesn’t sound like any sort of insult, but to me this sounds like Touche Amore if they were slow and had longer songs.  I just don’t listen to many bands like this, so I’m sort of in a bad spot with comparisons.  Sunny Day Real Estate if they played a bit more evil?  Fuck if I know better.  It’s cool, just not kick my ass all over town cool.  (Animal Style Records)

FAKING, “Vices” 7”
Philly is an incestuous scene that breeds one awesome band after another.  You’d think with all the cross-pollination and member sharing some of these bands would have extra toes or an extra chromosome or something.  So, with Faking these dudes share a musical family tree amongst former and/or current members of Fight Amp, Ladder Devils, Gunna Vahm, and Creepoid (and probably more).  They clearly have the noise rock thing on lockdown, furthered by a loud, sharp bass sound all over this short-player.  They don’t quite have song transitions down to a science, as breaks between parts sound like almost totally different songs at times, but hey, they make a heck of a racket with what they’re doing and I’m cool with it. These blue-bloods are onto something.  (Reptilian)

LADDER DEVILS, “Clean Hands” LP
Finally, my dudes lay it down on a proper full length that does justice to what I always knew they were capable of doing!  I think they had sort of a slow start, what with changing drummers, and evolving their style over two EPs that collectively made up their last LP, a rather disjointed effort that was the band at two different spots and not quite sure of themselves.  But all these guys have been playing in other bands together for ages (heck, two of them are related) so their natural chemistry is finally showing on “Clean Hands”, their first LP as a band with a now solid lineup and a collection of songs all written together.  Sure, so two of these songs were on the split with Helms Alee, but they re-recorded for this and they sound better.  Those in the know will need no description, but their chunky noise rock culls from the vat that brewed up like-minded noiseniks in Fight Amp, Helms Alee, and Young Widows.  And while all those bands have their own very dialed-in and distinct sound Ladder Devils have done the same with some seriously bad ass tones and riffs.  A solid effort all in all. (Brutal Panda)

PRAWN, “Settled” 7”
Prawn released one of the best LPs of the year and these two songs were left off of it.  I can see why, as they don’t quite fit into the almost seamless transitioning of the tracks on the LP.  It’s not to say they’re clearly throwaways or anything, far from it.  They just don’t fit the overall vibe of the album and so you get them here on this 7” instead.  “Settled” has an almost older Death Cab feel to it for the first half, and then goes for Prawn’s big, spacious build up and bringing in that trumpet that enters their songs every once in awhile to accentuate the awesomeness of the ending.  “Built Of” goes for a faster, slightly more aggressive feel before they roll in with some female backing vocals and violin.  It’s definitely the band throwing some minor curveballs in terms of presentation, but still clearly the band fans will already know and love.  Once again, killer artwork in the packaging of this fella.  A nice companion to “Kingfisher”.  (Topshelf)

SWEET JESUS, “Box” 7”
Swiz worship.  They know it.  I know it.  If you like Swiz you’ll know it too.  And that’s perfectly OK.  Oh, you don’t know Swiz?  First, stop reading this and get “No Punches Pulled”, their whole discography.  Got that out of the way?  Good.  I’m glad you stopped reading this for a few days to absorb all that.  So yeah, Sweet Jesus- part time Providence band filled with dudes from lots of other good bands going for a late-80’s Dischord sound.  Rock n’ roll hardcore with loose guitar, a heavy swing, and swirling around all the ripping action are doses of awesome melody.  The first couple songs are super punchy and short and that would make a perfect blueprint for everything else they do.  And while the second pair of songs are only slightly longer they drag a bit and feel a little less chaotic, they don’t have quite the stabby goodness of the first two.  Still, a solid introduction after a demo that circulated a couple years ago.  (Triple B Records)

WRONG, “Stop Giving” demo
It’s a late addition, but this is easily the best demo of 2014.  There have been plenty of bands that have tried to nail the sound that Helmet perfected over 20 years ago.  Most have failed, or not quite got it exactly.  This sounds exactly like Helmet.  Someone could have told me that this was an unreleased demo between “Strap It On” and “Meantime” and I would have believed them.  Everything down to the recording, the booming drum sound, the clever play on timing, the enormous wall of noise guitar and the rhythmic thud that permeates these 4 songs has me hungry to hear more.  Even the tape cover looks like it came from the early 90’s.  Get on this.  It’s downright incredible.  (Wrong)
Posted by Hex Records at 3:47 PM