HERE'S SOME REVIEWS FOR MAY!

It's that Spring time thing where I'm out traveling all the time whether for adventure, leisure, shows, or a combination of all of the above.  So it does not afford me a great deal of time to be writing about music.  I also doubt any one reading this is fervently looking forward to every time I post one of these things up (well, there's like maybe 2 people who do), so I don't feel much pressure to go at it.  Anyway, here's some stuff that came out recently that I think is just aces.  Enjoy. 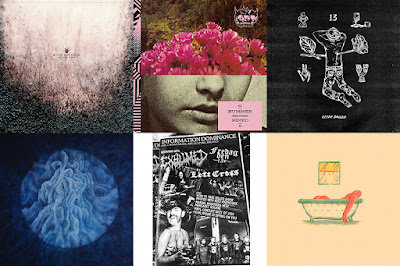 BLOOD SUN CIRCLE, “Distorted Forms”
I didn’t release this so I get to gush about it as much as I want, so it’s not like I’m biased or anything.  There is so much tension on this record.  Every song sounds tense and anxious, yet sullen, heavy, and moody at the same time.  The band has been working on this record for a couple years now, perfecting the parts, getting a recording that does justice to the big sounds they produce, and it pays off.  I know they probably hate comparisons, but a lot of this reminds me of Young Widows, “In and Out Of Youth and Lightness” in a way.  That record showed YW stripped down, extending simple parts into big ideas that worked really well because they had the best tones in the world.  BSC mine a similar vibe.  Songs like “Mercy Kill” are essentially one part played a slightly different ways for a couple minutes, but it sounds amazing.  “Hideous Twin” (probably my favorite song on the record) works in a very similar fashion with a monstrous bass line dominating over a repetitive jangly and grating guitar part that only breaks for a melodic chorus.  I can’t recommend this enough.  If you’re a fan of stuff that is really heavy, but super exacting about the minute detail of crafting songs and getting super nerdy about gear this is a pretty good place to get that fix.  (Drops Of Us)

BUMMER/ PINKO split 12”
This may be one of the best splits to come out this year.  Both bands are very much on my own personal sort of ‘up and coming’ list of bands that I think are really doing some cool stuff.  Bummer has started making the rounds with not only a really cool name, but they make some of the best riff-heavy grooving noise rock around.  Lots of rolling thump and smash to their songs, which is great.  Fuck it, they got a song called “Freedom Cobra”.  PINKO made this amazing demo last year (I think it was last year anyway) that I greatly enjoyed and they bring more of that same style here with a handful of songs recalling the more chaotic moments of At the Drive In, mixed with some old Botch and Refused bits.  I know, all big names, but think of them all sort of mashing up in a really spazzy sort of way and you get the wildness of PINKO.  Both bands totally deliver the goods.  So investigate people.  (High Dive Records)

CLOAK DAGGER, “I Want Everything”
I was pretty certain this band was all finished.  I guess they have laid dormant for several years while they thought up their next thing and now they strike back with a self-released LP of hyperactive Hot Snakes-inspired garage punk that may be my favorite thing I’ve heard from them in their fairly long on-and-off existence.  They move between quick slash-and-burn heaters (like on “13 Everything”) and some more melodic, emotionally charged rippers (“Black Rose”).  It makes me wish they got out a little more because while I was fairly lukewarm to their previous material this particular record smokes.  (Quit Life Records)

CLOUD RAT/ MOLOCH split 12”
Cloud Rat is quickly becoming one of my favorite aggressive type bands out there.  I’m not sure why I slept on them for so long, but having played with them (seriously, go see them live, it’s insane) and kept their most recent full-length “Qliphoth” in steady rotation it’s pretty exciting to see what’s next.  So on this split 12” they release a handful of new songs that have a more chunky metallic/bigger sort of production that also tend to be a bit more complex in their arrangement overall.  It definitely works well.  It’s interesting to see them work within their known framework while attempting a number of different things (check the last track for something very out of the norm from them), and remain prolific as well (they’ve already released three splits this year and it’s not even June, an even more recent split- with Disrotted- is their most challenging and unique contribution so far).
Moloch is some straight depressing, super nihilistic sludgy doom that moves at a hateful glacial pace.  Think Noothgrush, think Grief, but from England.  Their two songs take up almost 20 minutes if that gives you an idea. (Halo Of Flies)

INFORMATION DOMINANCE zine #1
I have known Jonah Livingston for a very long time I am happy to say.  He is one of the most hard-partying people I have ever encountered and not in that annoying ‘calm down fella’ sort of way.  It’s like the man is a never-ending well of positivity, even in the face of absolute crumminess, a top of mountain of crushed beer cans and Motorhead records.  So I have to say it’s a little strange that he has committed some very well put together scribblings in a polished paper zine format.  There is a great deal of political/social ruminations mixed with some varied and thoughtful interviews with Matt Harvey of Exhumed, Swedish thrashers Fredagden 13:e, Richmond metalheads Left Cross, and Gwar prosthetics creator Margaret Rolicki.  It’s a nice mix of cool shit all curated with Jonah’s thoughtful and knowledgeable insight.  Party on Wayne.  (Information Dominance)

MUTANT SCUM, “Field Recordings” tape
I don’t have much to go on here except the music on this thing and some live pictures of this band.  Personally, the music isn’t re-inventing the wheel by any means.  It’s kind of dirty hardcore/thrash all about slime monsters from the sewer from dudes I can only imagine smoke a good deal of dope.  However, live it appears that they all have elaborate Swamp Thing- meets-Bigfoot-meets skull monster costumes they wear so I kind of want to see them based on that alone.  (Handstand Records)

PILE, “A Hairshirt Of Purpose”
This feels like Pile’s most reserved and calm (for lack of a better word) record to date.  When I first listened to it I wasn’t sure if I was going to like it.  But like all their other releases it takes a few listens before all the genius of it unravels and becomes more apparent.  Opener “Worms” is evident of this- a very lackadaisical and breezy affair that contains some serious depth within the lyrics and thoughtful arrangement.  “Leaning On a Wheel” moves very slow and sullen before it opens up into one of the most beautiful songs they have ever crafted.  Pile’s signature has always been a combination of the strange arrangements of the constantly shifting rhythms of their music that twist and turn as if lost in a maze, yet still incredibly catchy, and Rick McGuire’s off-kilter croon that soothes, breaks, yells, and instructs.  While their odd sense of melody envelopes their music they are no stranger to aggression and that is on display as well with the title track rumbling along, directly following the clatter and shouting of the B-side opener “Texas”.  They are, if nothing, a band that remains consistently good, continually crafting music that veers further into less expected structure yet still these perfectly crafted songs.  (Exploding In Sound)
Posted by Hex Records at 9:07 PM