I am compulsively going through all my seven inches, of which there is likely about 500, trying to see what I want to siphon off from my life, and in the process I have listened to most of them to assure myself if I want to keep them or not.  Is that obsessive?  Well, somewhere in that mess I managed to listen to and read a bunch of new stuff too.  So here it is. 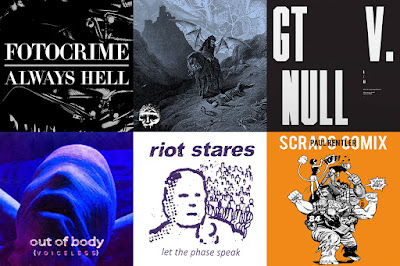 FOTOCRIME, “Always Hell” 7”
After Coliseum quietly called it a day after over 10 years together Ryan Patterson really wasted no time in organizing a new project where he is essentially the sole songwriter and musician.  However, this is far from a solo lonely guy with a guitar type project.  This follows a steady path that one could see as a logical evolution of what Coliseum was doing towards the end.  Just as each Coliseum record moved slowly in a post-punk type direction this new project, Fotocrime, seems to fully realize it and gives heavy nods to those Killing Joke and goth-y vibes you kind of figured Patterson would eventually roll with anyway.  On this 7” his playing and vocal style are still present (along with stark socio-political lyrics), but a little more use of background textured synth is utilized, along with a drum machine in place of a person.  It presents a different air of presentation and a new direction in terms of production and recording style.  As with nearly everything Patterson has done in the last few years it’s a bit of a grower, but once it gets in my head a bit I tend to really enjoy it.  Apparently the live version of this band is pretty damn exciting, so not only am I happy to see the man still in the game, but also taking a chance on something he is passionate about that might be a tough sell to old school fans.  It’s a good start.  (self-released)

GREEN SLIME, s/t
This duo is comprised of Eric and Blake Ellman, who have played both individually and together in every Buffalo band ever.  Their rap sheet on past bands is nothing short of prolific.  So, naturally, aside from being brothers, they have a pretty instinctual feel for playing together.  This little project of theirs combines a monster dose of thick-as-molasses rock that fits somewhere between the non-shitty Weezer stuff, Torche, and Sugar (or at least the songwriting style of Bob Mould and his various projects).  I’m quite into it because it’s really easy to get into and exceptionally catchy while still keeping it pretty chunky and riffy. (Ruby Disc)

GT/ NULL split live LP
I’ve spoken at length about Null.  On this they have four live songs culled from their already known releases (plus one new song), and they’re almost indistinguishable from the studio recordings.  They play slow, heavy, but melodic (mostly in the vocals) songs that bring to mind bands like True Widow, Floor, and Cloakroom.  However, instead of bass they use synth, but it sounds so deep and heavy you really wouldn’t know the difference.  I’ll pretty much consume whatever this band releases.  GT are, from what I can gather, a regional Alabama band that is kind of bluesy rock, but with a slight punk vibe and a dark swagger.  Think maybe Vincas, but less noise rock, Hot Snakes minus as much personality.  Their tracks are also live, and again, they play real tight and get a good recording so you really can’t tell.  This was a Record Store Day release (meh), but focused more regionally as benefit for a local charity (Girls Rock Birmingham), which is awesome.  It made it more fun tracking this one down.   (Seasick Records)

INTEGRITY, “Howling, For the Nightmare Shall Consume”
At this point I’m going to say that Integrity is kind of Dom Romeo.  He pretty much went from being their #1 fan, to playing in several bands that heavily sounded like Integrity, to being in Integrity.  And he has written a pretty solid Integrity record.  Honestly, I have not kept up with all the various Integrity stuff since “Humanity Is the Devil”.  This record weighs in heavily with more galloping thrash and speed metal type stuff, and a little less on the meat-y breakdowns of old material (save for “I Am the Spell”).  Of course, there are solos everywhere, almost non-stop.  “String Up My Teeth” is a strong departure and will likely throw off long time fans with it’s kooky backing vocals, but hey, after 20 plus years you gotta try something new, right?  The thing that has always kind of bothered me about Integrity though is the adulation thrown at their frontman, as if he is some sort of great visionary.  And instead of being upfront about admitting that, “hey, I’m just the singer” the dude seems to bask in the glory.  He’s the singer.  He’s not writing the music.  The Melniks laid the groundwork and a backing band has worshipped that style ever since.  Dwid basically has to just give the OK to other people writing music that sounds like Integrity.  That’s it.  So if you liked Integrity before you will enjoy this.  Dom Romeo put together a good band that wrote some solid jams for the dude from Integrity to sing on.  (Relapse)

OUT OF BODY, “Voiceless”
Feel good record of the year?  It’s quite possible.  I’ve been jamming on this album since probably late last year, awaiting its eventual release into the wild, and it surely delivers.  Out Of Body are the little secret from Austin, TX that isn’t so secret anymore now that they’re on the road a lot more and getting some deserved attention.  Their take on 90’s-era post-hardcore is informed as much by standard bearers like Quicksand and Shift as it is by more alternative-rock champions like Failure, Far, and Smashing Pumpkins.  There’s as much emphasis on groove and riffs as there is on spacey melody and uplifting vocals.  And I know I’m a predictable sort, so since it has the best qualities of the aforementioned groups of reference I’m all over this like your weird aunt getting a tarot reading at a psychic fair.  The only small downside is that all four of the songs that appeared on their demo from last year are also on this and I was hoping for some additional new material.  Still, you get a total of 10 jams to rock your socks off for the rest of this year.  After that they better deliver some new stuff, so help me.  (Coin Toss Records)

POST/BOREDOM, “Casual Friday” demo
Pacific Northwest homies invoke spirits of their regional brethren in the form of Harkonen’s more chunky smashiness and These Arms Are Snakes more caustic/less artsy (less snarky?) moments, with a good dash of all out noise rockin’ drive.  Naturally, there is a good sense of humor going on, what with song titles such as “Chef Goldblum” and “Buttmans Bathole” to keep things in check and the pretty cover painting of the band.  Give ‘em a chance, let them be your friend.  (ConditionsRecords)

RIOT STARES, “Let the Phase Speak” 7”
Here is another band that is taking many cues from 90’s hardcore in a great way.  They totally nail the sound Snapcase was coming out with on “Progression Through Unlearning”, which, at the time, was a great combination of their chunky, pinch-harmonic mosh-y hardcore, and something a little more upbeat and rocking.  To be honest, I’m surprised there aren’t more bands out these days that do stuff like this.  Snapcase was fucking huge when that record dropped.  I guess these South Carolina cats picked up on that in a big way and I suppose they’re getting in on the ground floor of that particular revival niche.  The two new songs on this seven inch progress the style they started with on their debut 7” last year and it’s pretty damn good.  They blow the roof off things with the B-side, which is a cover of Cast Iron Hike’s, “Boxed”, an absolute crusher from an very overlooked band who dropped one amazing record almost 20 years ago and then called it quits.  I’m exceptionally happy to see a new band draw some attention to that and hopefully people will explore more for themselves.  Here’s to more from this new-ish exciting band who obviously have good taste.  (Bitter Melody/ Speedowax)

SCRAPS COMIX,  Paul Rentler
An art zine full of off the wall pop culture mash-up’s with photocopy hell, melting faces, and the arcane.  Paul Rentler has an exciting style where random ephemera from every niche of popular culture collides in strange collages pairing everything from my childhood (and before) to create fantastic new spontaneously combusting monsters.  Bart Simpson’s aura exploding with the original X-Men, a stock image of a 50’s housewife fainting and the equally terrified specter of Slimer rising from her soul while the Hamburgler makes off with a skull, Orko the ghost (floating dwarf wizard?) being exorcised of actual ghosts, Garfield bursting out of Alice in Wonderland’s face petrified like he is boggled by the terror inside, Mayor McCheese rescues a buxom beach babe from snakes while dreaming of Robocop.  It’s a freaky head trip of roughly photocopied madness, cobbled together to form collages that are like all the random reference material of Craphound in a cross-dimensional rift with every back page comic book ad from the last five decades.  Give me more.  (paulrentler.com)
Posted by Hex Records at 9:15 PM