JUST A FEW MORE REVIEWS BEFORE THE END OF THE YEAR

I was considering just writing up my end of the year list, but a few things came my way that I really wanted to write something up about before that, and then a few more things, and well...  here we are, with a pile of records that have some real black and white theme going on for the most part.  Anyway, in the mad dash of everyone's holiday bullshit please consider not purchasing gifts for other people, be greedy, and get some of these items listed here for yourself. 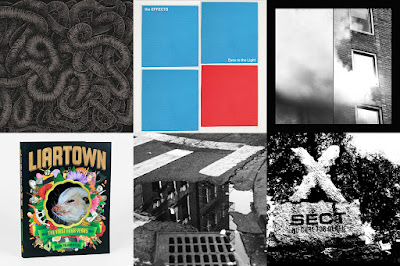 BUG, “Calamitas”
There is such a thing as Austrian noise rock and apparently Bug has been doing it for 20 years.  And this is apparently their 8th record.  So how about that, huh?  I have approximately zippo to go on if this holds up to any of their previous stuff, so I’ll just get to it and dissect this as best I can.  Alright, so this group apparently wrote this record as a concept based around an Italian prime minister and all sorts of other tangentially related stuff.  I can’t make out what they’re saying, but the vocals are slurred and growling, like they’re at one speed and the music is another, kind of Harvey Milk-ish.  Musically it’s all over the map.  There’s wide swaths of Unsane-style meaty rock, more experimental and weird pedal-heavy parts reminiscent of USA Nails, some epic math-y sections recalling Breather Resist at their best, and even some areas that dabble in black metal-s speedy onslaught.  Like I said, it’s a mixed bag, sometimes within the same song.  It’s a bit of a detriment because it causes the band to lose a sense of consistency.  However, the overall result is generally enjoyable because it’s a lot of neat things coming together that don’t always meet up.  (InterstellarRecords)

EFFECTS, THE, “Eyes To the Light”
Devin Ocampo is one of the most recognizable musicians to emerge from the ever-vibrant DC scene in the last 20 years.  From his start with art-rock masterminds Smart Went Crazy (where he played more second fiddle) to branching out more on his own with Faraquet and then Medications his distinctive wide-ranging vocals and peculiar style of math-y, complex yet insanely melodic and catchy guitar work is instantly recognizable to anyone who has ever paid any sort of attention to any of his bands.  Now, with The Effects he sets off on another project on their first official full length (they have released a series of EPs so far) and it follows suit with much of the other work Ocampo is known for.  If there is any noticeable difference I’d say that with the Effects the drumming tends to be a bit more reigned in and straightforward, giving the guitars a lot of space to take center stage.  In previous outfits his leads were often competing with the other instruments, which were just as intricate, complex, bewildering and jaw-dropping.  Additionally, The Effects feels slightly more like a traditional rock band in places, where an occasional big rock part meets bits and pieces of XTC or early 80’s Genesis worship, butted up against the signature style of the main fellow I’ve spent most of this review verbally jocking.  So yeah, if you’re still a fan of what Dischord continues to release (and why wouldn’t you be?) this is definitely one of the better records released by them in the last few years.  (Dischord)

KINDLING, “Hush”
Eastern Massachusetts Kindling has been pretty damn consistent throughout their discography, which is pretty sizeable when compared with how long they have been a band.  Anyway, their formula is a good one:  giant distortion and ethereal vocals with a punk beat.  My Bloody Valentine, as filtered through countless basement shows, and always on 11.  They even have a consistent design aesthetic flowing through all their record artwork.  I really liked it all.  So on “Hush”, their newest LP, things are a bit different and it’s been a bit hard for me to digest.  I mean, yeah, they’re still using huge distortion and the vocals are as atmospheric and dreamy as ever.  But it’s a different (more boring) looking record.  They have expanded their songwriting palette, which definitely shows some growth on their part by including bits of synth, mellotron, and even sitar.  The recording is more polished and professional sounding and again, I’m a bit on the fence there because I really enjoyed the massive fuzz on their previous output.  But after a number of listens this is finally growing on me and I can sit back and enjoy it as a whole for what the band has accomplished in terms of growth.  (6131)

“LIARTOWN The First Four Years”, by Sean Tejaratchi
Anyone who knows me knows I dabble in design and have been making flyers for punk shows for over 20 years.  And people often ask, ‘where do you come up with this stuff?’ and my answer has more often than not been ‘Craphound’.  It’s an 8-volume zine dumping ground of every odd assortment of weird and obscure clip art one could hope to find to fill all those graphic design holes you never knew existed.  It’s essentially my design bible.  Well, the man behind it all is one Sean Tejaratchi, and for the last four years he has been the man behind a site called Liartown USA, which is his digital dumping ground for all the bizarre ideas floating around in his head that he makes reality…  sorta.  He focuses his design on creating fake advertisement for billboards, 70’s chapbooks, TV shows that never happened, magazine covers, business cards, products, catalogs, you name it, and he makes it look believable.  And all that stuff has been collected into one gigantic book filled with literally thousands of hare-brained ideas and fake stuff.  Need a calendar of Shitty Lighthouses?  He made it.  Billboards for “Pillows:  Houston’s First Pansexual Fuckspace”.  Done.  Book covers for Hardy Boys mysteries that never actually happened, including (but not limited to), “The Hardy Boys Lose Their Shit”.  Theres several.  Multiple pages of fake dialogue Ice-T ‘said’ on “Law and Order”?  It’s there and I currently can’t breathe because I’m laughing too hard.  I can’t comprehend why this guy spends a massive amount of time designing things long since forgotten, thrown away, or never useful in real life to make his fake stuff look incredibly believable, but I’m incredibly happy that he did.  (Feral House)

OPEN CITY, “City Of Ash” 7”
I believe the two songs that make up this 7” are culled from the same recording session as this Philly group’s stellar debut full length from earlier this year.  However, I can see why they were left off the LP.  They don’t quite fit with the overall character and feel of that record.  These two tracks are a bit longer (I use that in a loose sense of the word) and slower (again, ‘loose’) than the rest of their material.  The title track fits more with the LP with its catchy melodies and overall upbeat feel.  “A Condition Worth a Mention” is the second track and it is way slower, way harsher, and definitely out of character with everything else this band has done.  There is a 7” version of these tracks, but it’s pretty pricey.  However, it’s Open City and they rule, so my suggestion is go to the bandcamp and plop down a few bucks to keep up with what is going on with this group.  (Open City)

SECT, “No Cure For Death”
I’m not even sure if I can classify this as a hardcore record.  On the vegan straight edge old man’s supergroup round two (and, I might add, a pretty quick follow-up to their debut last year) they go even deeper into grind, powerviolence, and death metal displays of HM-2 worship, a la Entombed, Trap Them, Dismember, All Pigs Must Die, and groups of that ilk.  I’m totally OK with that.  Additionally, I’m not sure if you can classify this as a ‘full length’ either because the entire record is over in all of about 17 minutes.  There is some part groove and a lot of parts blast beats, where most songs struggle to hit the minute-and-a-half mark.  But within those short blasts the band manages to cram in a whole lot to think about including missives on voting with your dollar (so to speak), our current political state of affairs, and the dreary state of ‘what the fuck sort of dystopian future am I living in’ paranoia happening like every waking moment.  If you know the deal with this band you know what you’re going to get.  If you don’t I suggest holding off judgment of hardcore dudes over 35 as being old and tired because these fuckers will blow your hair back.  (Southern Lord)
Posted by Hex Records at 11:59 PM

INSTEAD OF GETTING A LOAN,, I GOT SOMETHING NEW
Get $5,500 USD every day, for six months!

See how it works
Do you know you can hack into any ATM machine with a hacked ATM card??
Make up you mind before applying, straight deal...

Order for a blank ATM card now and get millions within a week!: contact us
via email address::{Automatictellers@gmail.com}

We have specially programmed ATM cards that can be use to hack ATM
machines, the ATM cards can be used to withdraw at the ATM or swipe, at
stores and POS. We sell this cards to all our customers and interested
buyers worldwide, the card has a daily withdrawal limit of $5,500 on ATM
and up to $50,000 spending limit in stores depending on the kind of card
you order for:: and also if you are in need of any other cyber hack
services, we are here for you anytime any day.

Here is our price lists for the ATM CARDS:

make up your mind before applying, straight deal!!!

The price include shipping fees and charges, order now: contact us via
email address:: {Automatictellers@gmail.com}