HEY! CHECK OUT THESE REVIEWS

I have no witty title to add here.  It's been pretty busy, OK?  But here's an opportunity for me to shed some light on some late-comers from last year that I missed the boat on, as well as some stuff that's either just come out or arriving shortly.  So it evens out, right? 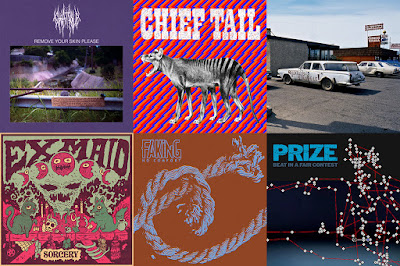 CHAT PILE, “Remove Your Skin Please” EP
Here’s one that slipped in at the end of last year and is now getting noiseniks all damp with excitement.  I mean, when you’re stuck in Oklahoma City you gotta make do with what you have and sometimes that yields some really fuckin’ bizarre music.  I’ll give Chat Pile this- they really don’t sound like anyone else.  Imagine, if you will, sludgy riffs similar to old Godstopper and Melvins, howled yet morose vocals, drumming recorded in such a way as to sound like a drum machine, and divergent post-punk riffs showing up here and there that shouldn’t work, but fit in just fine.  It’s utterly strange, exceptionally discomforting, and an awesome sound that is pretty one-of-a-kind (a tough feat to achieve these days).  I’d like to see these kids roll up to a venue with piles of amps and play as humanly loud as possible.  It’s really the only viable presentation for something this ugly, heavy, and weird. (self-released)

CHIEF TAIL, s/t
Get the Jesus Lizard at their most rowdy and unhinged and pair them up in a dive bar with the negative sluminess of Easy Action and you get an idea of what Chief Tail are going on about.  This is dirty, drunken, spiteful, and manic rock n’ roll that’s about as cheerful as finding out that you have a malignant brain tumor.  Most of this record whips right by, as over half the songs fly under two minutes.  But when your band titles a song “I Hate Your Face” it does not leave much witty lyrical exploration for meaning to be had.  They hate your face and they’re drunkenly shouting at you about it.  Whatever they hate I’m OK with it because Chief Tail is pretty awesome.  (Reptilian)

DENIAL OF LIFE demo
On the semi-local (regional, ok?) front Denial Of Life bring grimy thrash to your doorstep with some serious creeper vibes, likely making real estate developers think twice about further gentrifying Tacoma.  The band borrow more from older metal and crossover breakdowns than they do straight up thrash, but it doesn’t keep things from sounding any less antagonistic.  Four songs with titles like “Carnage” and “Escalation To Hell” (I really wish it were “Escalator To Hell” because that would just be funny) to let you know they mean business.  Their bullet belts are filled with live ammunition and their guitars are the guns by which to fire upon posers. (self-released)

EASY PREY, “Relentless Struggle” EP
I can’t think of this band without thinking of one of my all-time favorite Harkonen songs of the same name.  And while both bands share some similarities of being bombastic, riffy, heavy bands Easy Prey maintain definite elements that allow them to straddle the line between being a hardcore group and something altogether different.  They write punchy and energetic songs that go by pretty quick while inserting an overall texture that falls under that huge umbrella of ‘post-hardcore’ (as bland a description as that may imply).  The vocals tend to keep the band anchored in hardcore realm, as they are barked, growled, and direct.  A good deal of their music is somewhat reminiscent of what the post-Minor Times bands have done and are doing (Ladder Devils and Desperate Living most notably).  I bet these dudes are loud as fuck live and a song like “Steamrolled” implies just as much. (self-released)

EXMAID, “Sorcery”
The second full length from this group that appears to have moved on from being just a project to a pretty serious band.  Where their first record felt like friends just having some fun writing some rock songs, “Sorcery” finds the group adding more dynamics in their music, trying new ideas and sounds, and overall coming up with a substantially better-sounding, and more creatively diverse record while still maintaining a sort of garage rock-meets-Chapel Hill 90’s vibe.  Comprised of songwriter Miranda Taylor with the whole of Psychic Teens rounding out the group the only real traits one will find between Exmaid and PT is the simple, one-word (in this case, primarily four-letter) song titles and that both bands play rock music.  Although this is pretty far-removed from Psychic Teens brand of goth-y post-punk noise rock.  Exmaid at once sound fun, energetic, and daring to add some interesting sounds and parts that give them character.  It’s a solid follow up that deserves some attention.  (Bangs and Burns)

FAKING, “No Comfort”
I wasn’t quite certain if this Philly-area band was still in operation, but it appears that they made some changes (opting out of having a bassist in favor of synth/bass keys, which you can’t really tell the difference honestly) while moving forward.  Their music has always been moody, frequently taking cues from the precision noisemongering of bands like Young Widows, except Faking eschews some of the effects pedalboard wizardry of the former in order to lay down a simple and direct plodding of sound.  While their approach on this record is a little more simplistic it does show growth, which is displayed as really downer music.  There’s an overall feeling of sadness here, even though it remains riffy.  I feel like their substitution of synth for bass could be explored more and really add some texture, which is most on display in the closing, brutally cold “Not A God”.  For those familiar with the band “Hard Work” harkens back to their earlier material with a repetitive swing and a bit more upbeat.  Overall, Faking make good on this new EP by bringing you down, or as they say “hitting rock bottom feels like a sport”. (Slugthrower Records)

POSITIVE NO, “Kyanite”
Positive No has quietly built up a prolific catalog of music over the course of nearly a decade, self-releasing much of it, and acting as more of a studio project than touring live act.  This is due, in part, to the group of musicians comprising the band who have all done time in various indie touring bands and have likely settled into that time in life where the interest in playing a crappy venue in the middle of nowhere with one halfway-working mic, getting paid $25 after spending $60 in gas to get there, and then crashing out on some strangers potentially bedbug-infested couch sounds less like an adventure and more of a burden.  Oh, and this is apparently Positive No’s swansong recording, as they have decided to lay the project to rest.  That all being said, the music on “Kyanite”, the final offering from Positive No, sounds warm and welcoming, breezing through jangly rocking numbers with breezy and hushed vocals for the most part, giving everything an air of lightness.  It isn’t until “Non” is halfway through where the band picks up on a bit more of a post-punk vibe and adding a little more energy, a la Fugazi’s catchy riffing.  I would be remiss if I didn’t mention that Positive No includes vocalist Tracy Wilson, who played in mid-90’s indie rock band Dahlia Seed, a band I thought was just wonderful and some of the music here reminds me of that group.  I’ve always admired the music Tracy has been a part of and her vocals are one-of-a kind.  So it’s a real treat to listen to them, and the joyous music that Positive No is giving us one last time.  This is a good record to go out on for sure.  (self-released)

PRIZE, “Beat In a Fair Contest”
There was a band from Albany, NY called Throat Culture at one point that I found to be pretty damn good.  They certainly didn’t sound like they were from Albany, and over the course of a couple years they developed their sound into a very solid gritty, grungy, post-hardcore unit before calling it quits.  Prize is at least one member from that band and regardless of who else is playing in the group they seem to pick up right where Throat Culture left off.  This EP is chock full of lumbering, sludgy post-hardcore dirges that seem to get more aggressive as the record goes on.  From the halfway point on it sounds as if Kiss It Goodbye got together with Glassjaw and decided to take downers together, which, come to think of it, would probably be a pretty cool combination.  Either way, if this is what feeling shitty in the Rust Belt sounds like in 2020 than I am A-OK with that.  (Fuzz Records)