IT'S REVIEW TIME FOR JULY!

I don't know what to tell you folks, things are kind of crazy- no closer to seeing a band play live than we were three months ago, gestepo out on the streets of the city I live in, and way too many people in complete denial that there's a public health hazard going on worldwide.  I've said it many times and I'll reiterate- I always try to look for the positives to remind myself there's some good in the world and amplify all that.  On the good news front, there is significant progress on the label end of things being released as expected.  Also, the good folks at Decibel magazine did a big piece on the importance of masking up to protect others that I was asked to take part in, and there's a bevy of new music out there to take your mind off the troubles of life and here I am to tell you about it.
I just want to add one last bit- musicians are often the brokest people out there and I'm humbled to have seen so many of them recently donating money they could desperately use to help out humanitarian causes.  Seriously, it brings a tear to my eye (of the joyous variety).  OK, ehough of that, here's what's making me dance around my house like a dummy. 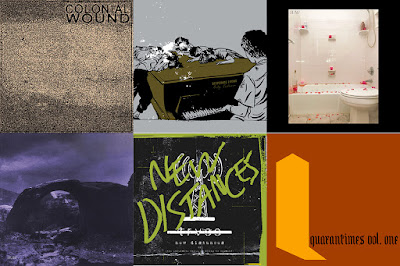