So I typically post stuff like this on the weekend, but I just had my eardrums blown out by the Melvins and Unsane less than 24 hours ago, and the long drive home (and subsequent ass-dragging into work today) has made it a little tough to keep up. Nevertheless, I listen to, see, and read things, and end up writing about them. And you know that. So here's your fill: 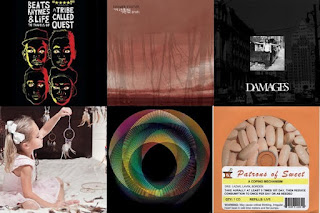 BEATS, RHYMES, & LIFE: THE TRAVELS OF A TRIBE CALLED QUEST DVD
One of my two favorite hip-hop groups ever (the other being Public Enemy), who made one of my top 5 records of all time, finally gets their story told. Much of this documentary focuses on their reunion shows they did in 208 and 2010. But, naturally, the tale of how it all came together is presented as well. A Tribe Called Quest began in the late 80’s, right about the time I was seriously getting into hip-hop myself. It was an amazing time for the genre, with established rappers like LL Cool J, EPMD, Run DMC, and Boogie Down Productions releasing some of their best material to date. Then you had Public Enemy explode on the scene and bring this radical political consciousness and rage to the game. It seriously knocked my little 12 year old ass out, and I credit them for opening my eyes to many of the world’s injustices. Then, not too long after, it seemed like there was a backlash to that. All this heavy-handed political rap was countered with the trifecta of Jungle Brothers, De La Soul, and A Tribe Called Quest all coming out at the same time. These groups were far more light-hearted and fun. It was still smart, there was still a consciousness to it, but they all brought a far different style to the game- samples and beats I’d never heard before, rhyming that wasn’t all braggadocio, or fervently political. It was just something new, and it grabbed my attention. Tribe seemed to rise to the top of the pack because they just did it better. The interplay between Phife’s high-pitch hypeness, and Q-Tip’s smooth delivery was this wonderful pairing, all backed by Ali Shaheed’s turntable magic. To this day, “The Low End Theory” gets me just as excited as it did when it came out 20 years ago, and I still play it on the regular (and have it on 3 formats, no less). So beyond the background of the group, and footage from some of those old shows, as well as the reunions, there’s the ugly side of things. There’s the burn out from the late 90’s, when they originally disbanded, and just went their separate ways. There’s Phife’s ongoing battle with diabetes, that led to an eventual kidney transplant. There’s the bitter acrimony between Phife and Tip (for whatever reason) that seemed to come out of nowhere and then dissolve into nothingness. It seems they are all still good currently, and still traveling in one sense or another. One thing that hasn’t changed- that being how much I still enjoy this group and their records.

DAMAGES, “Indignation” LP
I’m not sure how it escaped my attention the last time I reviewed stuff from this Vancouver group. Their bass-thick jangly post-hardcore brought to mind the trademark style of 90’s Touch and Go Records bands, but I was overlooking an obvious homage, that had somehow gotten lost in the referential rolodex of my brain. And that reference, which is loud and clear on the group’s full length, is some very heavy nods to fellow Canadians Shotmaker. From the aforementioned rubbery bass front and center, to the chaotic bursts of yelled 90’s-era screamo hardcore (and I mean that in the best way possible), down to the awesome packaging (complete with a newsprint booklet of lyrics and die-cut record sleeve), Damages has really got a good thing going. Sure, it sounds a lot like a band that came before them. But the thing about that is when a good band takes a sound from a criminally underrated band of the past it often makes for good results. So with that, I think Damages have put out a pretty great record. I’m most certainly feeling the lurching stomp of the title track the most here. (React)

FORMER THIEVES, “The Language That We Speak”
Since this band is from Iowa I automatically want to associate their sound with Modern Life Is War, which isn’t too far a stretch, as they have some similar qualities. But they take far more from the whole noisy mathcore style of things, a heavy vibe of later-era Breather Resist/early Young Widows rearing its head between the swampy bass sound, and sinewy, effects-spattered guitars. Maybe throw a touch of Touché Amore in there and you get what Former Thieves is laying down. Half this record is pretty awesome, the other half is a bit less interesting. They are a band that I think will consistently make good music, but I don’t necessarily think it will have a lasting quality 4 or 5 years down the line. It is what it is, and good for the right now, but who knows if it will be memorable. Perhaps they will continue to grow and get awesome, I can’t say. (No Sleep)

GIT SOME 7”
Here’s a Colorado band that always manages to sound like a dumptruck with a ton of lit fireworks emptying out the contents into a canyon in the live setting. That is to say, they’re pretty awesome- loud, heavy, chaotic at times, gruff, ultra-burly. Like early Clutch beating on Planes Mistaken For Stars (which some of the members of this band come from), Git Some have a good thing going. But on record it always sounds pretty weak. I just don’t get it. They have not done well to translate their awesome live sound to a good recording. This one, in particular, sounds exceptionally rushed, and I get the impression they were trying to bang it out before going on tour just so they would have something new to take with them. Here’s my suggestion. Definitely hear this band, but go see them to get the real experience. And if you want to support them buy some of their bassists awesome paintings he takes with them everywhere. (Alternative Tentacles)

GYPSY, “Giants Despair”
A full length records worth of music that sounds like taking Jawbreaker, Failure, Quicksand, and “Aftertaste”-era Helmet and throwing it into a blender. That, to me, is pretty nice. Of course, all those things added up today pretty much equals good mainstream rock. But let’s ignore that and focus on how for an old dude like me I’m OK with it. “Selfish Blues” and “Unconditionally Dependant” are my favorite songs on this. How about some live shows or something? Can we make that happen? (Six Feet Under)

PATRONS OF SWEET, “A Coping Mechanism” CD
For starters, Buffalo’s Patrons Of Sweet have returned with an EP’s worth of material that comes in a very simple, yet very clever package (which is much like their music as well). It’s a simple paper sleeve that is set up to look like a jar of prescription pills, complete with sticker info and all that. I just get a kick out of things like that. In much the same way, I get a kick out of this band. It’s nothing that will make record of the year material, but my man Vic has always been good at writing great riffs that are angular, melodic, and hook-filled, and have good interplay between vocals and guitar in making it work. The influence from everything J. Robbins (Jawbox, Burning Airlines, etc) related is very apparent. And seeing as I am a big fan of stuff like that I am a fan of stuff such as this too. The band bust out 4 new songs, a great Nirvana cover, a rather out of place Tears For Fears song, and a couple older tracks recorded live. (Patrons Of Sweet)

PSYCHIC LIMB, “Queens” LP
This LP is a case of both overdoing it and under doing it. It comes in this fancy-ass gatefold cover with really amazing artwork, and thick, yellow vinyl. But there is next to no information about whose record it is, no song titles, no lyric sheet, and it’s a one-sided record at that. It’s pretty much a total mystery (which I’m guessing is their goal). That being said, the music contained therein confidently strides the line between Discordance Axis’ dystopian future grind and C.R.’s wild DIY powerviolence/hardcore mish-mash. Go down to NYC sometime and see them put a hole in your face with pure sonic malevolence. (Clairvoyant Records)
Posted by Hex Records at 9:56 AM