IT'S BEEN AWHILE... REVIEWS FOR YOU!

I am now in a new house, all moved in, getting settled, arranging my records just right, already dealing with dumb college student neighbors who pee off their second floor porch and listen to crappy dance music...  yup.  It's already getting real.
Anyway, now that I am a bit settled I can get back to this reviewing stuff.  So here's some records that piqued my interest lately. 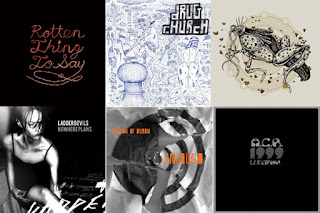 BRIDGE UNDER FIRE, "Why Wait?"
Upbeat dude rock as played by dudes with beards.  I can't really put it any other way, and it ought to be as apt description as one can get.  After all, having gone to Gainesville Fest several times now and hearing about 1000 bands that do a very similar sort of style it does tend to blend together.  It's nothing against these locals though because there is a soft spot for bands that do what they love just because they love it and don't really give two shits about what other bands they may sound like.  Nothing deep or philosophical (thought I would be intrigued to know the lyrical plot line for what the song "Jaws 8: Mr. Holland's Opus" was were it actually about that), and a bunch of silly song titles back up the gruff rock being set forth here.  Just some friends hanging out playing rock music with other dudes.  Nothing wrong with that.  (self-released)

BURNING LOVE, "Rotten Thing To Say"
One of the tops of the year, no doubt.  The second full length from the Toronto wrecking machine slays on a more realized level than their last outing, which seemed like they were still getting used to being a band (and also re-recording a lot of their 7" output).  On here, amps sonically get pounded until they spray blood from the speakers and riffs laying down a path for solos to ride the red wave of violence through your face.  Get fuckin' killed with these rippers.  I'm a bit more partial to the B-side overall as it leads off with the bitchinest riff barrage this side of a Motorhead record on "Hateful Comforts".  It is soon followed up with the one-minute -and-change blitzkrieg of "Tremors".  But it's a tough call when you have the very gruesome and detailed exploits of a serial killer on "Karla" from the A-side of this LP, as well as the wonderfully titled "Made Out Of Apes".  Tough call indeed.  I'm going to have to just say this entire thing rules front to back.  Just stop reading and get it now.  (Southern Lord)

BURNING LOVE/ FIGHT AMP split 7"
This split is in a series that a European label I'm unfamiliar with is doing featuring similar awesome artwork and a bevy of great bands like Thou, Kowloon Walled City, Great Falls, and more are a part of.  So whatever the theme may be is beyond me.  All I know is that these two bands on this record will sonically punch a hole through your skull.  Burning Love toss an alternate take of a song off their most recent full length (which would be a lot better if they gave up an exclusive song) and it's a total ripper.  Fast, aggressive, nods to stuff like Turbonegro's bitchin' rock attitude hanging with Tragedy's mean-ass demeanor.  Fight Amp deliver their own brand of noisy destruction, giving high fives to Tad's ballsy noise rock, and sharing a beer with Black Flag's negative attitude.  Exclusive songs or not, these two bands were meant to team up and that's a good enough reason to seek this out.  Good luck finding it in America though.  (Hell Comes Home)

DRUG CHURCH 7"
While a lot of people find Pat Kindlon's vocals in End Of a Year/Self-Defense Family to be either a clever use of dichotomy, or just downright irritating there's no question they fit well with his other band Drug Church.   He posed the question to me about this band, asking if I thought it was more 'fun' or 'art'.  I feel like it's a good mixture of both.  They are clearly not re-inventing the wheel.  In fact, they're stealing riffs left and right from Quicksand and Seaweed and melding the two together into an awesome post-hardcore/skate rock kind of mish-mash.  So that's definitely the 'fun' part, and hardcore dudes approaching (or already there) 30 who still enjoy this style will really love it.  Insofar as 'art' goes I have to say the following- not many bands who are younger and into this style necessarily get it as they were not there to experience it firsthand.  But I'm pretty sure most of these guys were and they do it really fucking awesome.  It's well-written, the lyrics are witty and funny, and the band does not waste your time.  They clearly give a shit about what they're doing, but having enough fun to know that this isn't the second coming.  So take that as you will.  If the cover art doesn't get you the music will.  Highly enjoyable.  (No Sleep)

LADDER DEVILS, "Nowhere Plans"
It pains me to say this, but this record is OK.  In an effort to be completely honest I gotta remove the friend goggles and call this for what it is.  And that would be a firm, "it's decent".  Half of this record was released digitally last year as an EP and those songs remain pretty good.  "Pyramids" has a heavy Young Widows vibe to it and I think is my favorite of the old set.  The A-side is three new songs, and one very effects-heavy experimental kind of song recorded a year later.  So there's a disparity among the entire recording, as well as the sound of a band that hasn't completely come into their own just yet (even though the members have been playing together for years in various incarnations).  The opening track kills and the rest is pretty good.  But for all the neat gear and cool effects pedals I feel that it is lacking something bringing it all together as a cohesive whole.  Maybe with a little time and a proper full length that isn't two EPs slapped together they will really come to fruition.  (Brutal Panda)

LUNGFISH, "ACR Sessions 1999"
Here's a band that I wish would drop another record, as well as play some live shows.  But that's pretty much a pipe dream at this point as I'm somewhat sure they're more or less done with.  You never know though.  They are a very strange band.  But I must say, it took me quite awhile to really get Lungfish.  Yes, they make a nice song, and the vocals are really strange, and if you're not listening carefully enough you'd think they made 10 records of the same song over and over again.  But once you take the time you notice how bizarrely beautiful Dan Higgs lyrics and voice can be in a sort of poetic stream-of-conscious HR in slow motion sort of way.  And the way in which the songs have a fascinating repetition that draws you into a trance until it opens up and reveals itself in a carefully thought-out loop.  Every album amazes me in its intricate simplicity and this record, demos culled from 2000's "Necrophones" full length is no exception.  And seeing that "Necrophones" was really my first experience with Lungfish it's the one I listen to least as it was at a time when I didn't really understand them.  And in retrospect, it's one of their more 'rocking' records, right behind "Talking Songs For Walking".  "ACR Sessions" contains half songs that ended up on "Necrophones", including a much wilder and rocking version of "Sex War", and other upbeat songs such as "Shapes In Space" and "Occult Vibrations".  More plaintive instrumentals such as "Eternal Nightfall" and "Infinite Daybreak" make up the other already-released tracks.  But then you get a handful of songs never released.  A couple I guess I can see why, as they are decent, but don't really hold up to the rest of the Lungfish canon.  Others, though, are just as good as anything else they've released, so it was a real treat to get some 'new' material out of this truly interesting and engaging band.  (Dischord)

MISSION OF BURMA, "Unsound"
At this point Mission Of Burma have been around longer, and released way more music, in their second run as a band than they did when they first emerged in '79.  And for a band that was split up for a good 18 years or so before reuniting their output has been consistently good.  but I gotta admit, for as much of a superfan I am of this band this new record feels a bit lacking.  I'd say about half the record is great, especially the second half, with strong tracks like "7s", "ADD In Unison", and "What They Tell Me".  But a few tracks fall a bit flat, which bums me out as this is a group that I've always found to be very influential and creative.  Bob Weston brings some freshness to the group as the only non-original member, and contributes some tasteful trumpet to a couple of songs.  And the Clint Conley penned songs tend to be my favorites here as I appreciate his flair for melody that complements Roger Millers more raucous, eclectic side ("Second Television", "7s").  It's still a decent record overall, but some of it is a bit weak compared to the overwhelming steamroller of awesomeness the rest of their catalog has.  (Fire)
Posted by Hex Records at 8:25 PM

I know. And I hate to say it because I love those dudes, but I'm betting they can do better... and I believe that they will.