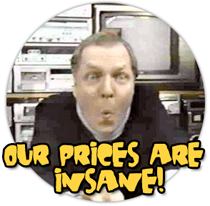 So after being in the same house for 7 years myself and the wife are moving into some new digs across town.  And that means a whole shitload of stuff to haul over.  But seeing as I'm entering old age my bones just ain't what they used to be and I can't be bothered to be moving so many things that are heavy (like boxes of records).  Essentially, what I'm saying is, instead of moving all that heavy stuff I'd rather sell it to you at a discounted price.
So I've come up with 4 awesome packages of sale stuff.
This will be going on for one week, so now's the time to get a lot of stuff.
Most of these sales are only applicable to US residents though as it's just too damn expensive to be shipping all this stuff out overseas when the prices are this cheap.
Check it:

Furthermore, DISTROS- now is the time to get in touch about some discounted rates to pick up some stuff.  If you have an interest in carrying some titles I'll be doing some deals for all of you as well.  hanginghex@hotmail.com
Posted by Hex Records at 8:43 AM