REV 25/INTO ANOTHER NYC

Why do I continue to allow myself to do these things?  They always go the same way.  But I guess it's how I get my adventure on.  And going through with it on my own keeps the pressure off, because if I were to bring anyone else they would just suffer, and curse me for my ridiculous lack of formal planning.  But regardless of the insanity of my plans it always makes for a good story later on.

I hopped a bus to NYC on Friday morning.  I sat next to this young lady who was a recent college graduate and clearly having trouble in the employment field of her choice (art history is never an easy market to land a career gig in).  She was clearly struggling with a cold of some kind, yet couldn't wait for the bus to make a pit stop so she could smoke.  I'm not so sure a cigarette is a good remedy for bronchitis though.  She was a nice enough person, and the conversation made the time go by quick... until we got caught in Friday afternoon traffic for a good half an hour while an accident was cleared out of the Holland Tunnel.  Once we made it into the tunnel it was so smoggy that I had visions of everyone dying from the fumes if we had been stuck in the tunnel during this accident.

Once in the city I immediately headed down to Union Square and found Irving Plaza after taking a few wrong turns (I don't have a GPS or smart phone, and I did not bring a map.  Where would the adventure be in that?).  Since I had nothing going on the rest of the evening I decided to plop down the $40 for the Rev show that night.  It really was too much money, but I hadn't seen Sick Of It All in nearly 10 years.  Everytime they have played remotely close to me in that time something has always come up and I really had no excuse to miss them this time, aside from the cost of the ticket.

Met up with an old friend for dinner before the show.  In all my years of going to NYC I've never eaten at Angelicas Kitchen and it's one of the old school vegetarian spots in town.  Well, it was bland.  And too expensive for blandness.  I guess staying away from there all these years was a good idea.

Made my way over to the Rev show. Popeye from Farside was doing solo acoustic covers of Farside songs.  I guess that's the closest I'll get these days to hearing anything off of "Rigged".  What I saw was OK I guess.  I really enjoyed that band when they were a band.  In retrospect they played super commercial rock songs, but at the time it came out it just sounded like good skate rock to me.  And when you're 16 that sort of thing sticks with you.
Damnation AD played next.  I've seen them here and there over the years as they play out a sort of never-ending reunion thing, playing a couple shows a year, and always doing the same 5 songs.  Regardless, they're 5 really fucking good songs, so I'm OK with it.  And they certainly did help sway me into justifying the ticket price, except that they only played two songs.  That's it.  Someone was late and their set was cut short.  Really?  That's it?  As much as I love Damnation ("No More Dreams" is definitely in my top 10 records of all time) they are a band of diminishing returns each time I see them.
Mouthpiece were next.  For older dudes they still have a lot of energy, but they're just kind of dull to me.  At least they can still claim to be a straight edge band. Which leads me to Chain Of Strength, who played after that.  I never really got into this band.  In fact, most of the late 80s/early 90s SoCal hardcore kind of went under my radar- NFAA, 411, Headfirst, Chain, etc- I missed the boat on all of them.  So I have to say that they were really energetic for a bunch of dudes who made a band based around straight edge, even though probably none of them are anymore (cough- Strife- cough)...  but boy could they swing some merch.  Numerous shirts and hoodies and stupid 'chain X crew' watches for $35 a pop.  Really?  I don't get that youth crew reunion merch whoring bullshit.  It's just a t-shirt factory with some music to go along with it.  Nonsense.  Now I'll be the first to admit that I get psyched on a lot of reunions, seeing as a lot of bands I enjoyed when I was younger are doing some shows here and there again.  But I appreciate the reunions more when the bands do it because they have fun and like the music (or do it for a good cause), not when they're just seeing how many hoodie designs they can come up with.  The Chain Of Strength thing just seemed like a sham. 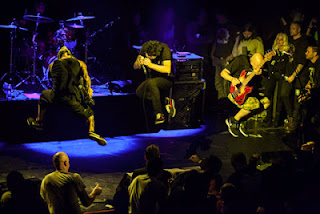 Aside from all that, Sick Of It All came out and proceeded to show everyone (except the idiots who decided to leave early) why they are still, 25 years later, the best hardcore band on the planet.  No one does it better.  Seriously, when I'm in my late 40s I'll be psyched if I have half the energy the Koller brothers bring each time they play.  It's unbelievable how good they still are.  plus, this set (with the exception of "Built To Last", "Step Down", "Us Vs. Them", and "Scratch the Surface") was all pre- '92 stuff.  Basically, just about everything from the 7", "Blood, Sweat, and No Tears", and some "Just Look Around" material.  Hearing songs like "We Stand Alone", "Injustice System", and "World Full Of Hate" live after so many years of not seeing them in all their intensity was nothing short of exhilarating.  Nothing like multiple stage dives and sing-alongs with one of the best bands around to make for a great night.  The $40 was indeed a bit much, and if they had pulled out "What's Going On" and "No Cure" it would have been completely justified.  as it stands though, it was still pretty fucking great.
I left feeling both exhausted and energized and sauntered back to Brooklyn where I stayed with a couple friends.

In the AM I wandered off with my friends to a coffee place and got some tea.  It was pricey, but good.  They went to work in Manhatten, I stuck around Brooklyn for the rest of the day.  Made my way over to Dunwell Donuts and grabbed myself a blueberry and a maple frosted sugary-as-fuck breakfast perfection.
It was brisk, but sunny day, and to me that makes for good walking around the city.  Checked out Desert Island Comics.  Indie comics are still my favorites these days, but there seems to be too much emphasis in this arena in making them look as if a six year old with violent tendencies drew them.  I don't get this trend.  I did, though, find an issue of Mome with an Al Columbia section I hadn't yet seen and paid $4 for it.  Score.  Plenty of wandering followed, through McCarren Park, McGolrick Park, up and down Bedford Ave., checking out Earwax and Academy Records.  I think the only thing that kept me from dropping $50 or $60 at Academy was knowing that I'd have to carry all that stuff around with me the rest of the night and my legs were already sore from walking, and my backpack aching on my shoulders.  Next time though...
That night an extraordinarily long walk up to St. Vitus followed and I finally got there around 10 PM.  Why does this show not start until 11PM?  Fuck.  I decided to go to the smaller Into Another show instead of the Rev show tomorrow night because I work on Sundays and I couldn't afford dropping another $40 for another show.  But $20 for Into Another at a small venue?  That I'm OK with.  Soon I saw the band start setting up, which was a good sign, and at 11 they let people into the room where the show was.  I couldn't help but notice that everything except the cymbals and snare had been set up.  Who doesn't finish that last bit before playing?  Why keep us waiting?  Oh yeah, I forgot...  Drew is also in Bold and they were playing the Rev show in Manhattan tonight.  Jeez, yet another reason why Bold sucks.  11:30 and the drummer shows up.  Good, we can start!  He sets up, and then...  nothing.  They finally started at 12:30.  What the fuck?  Apparently, they were waiting for guest list people from the Rev show to get there.  These same douches get to see them tomorrow night too, why wait for them?!  People were anxious/pissed.  I definitely feel like I would have been ore into the set if I didn't have to wait so long for it to start.  But, they opened with "Drowning", "Mutate Me", "Running Into Walls", and "Poison Fingers" and that's a pretty good way to start.  They sounded perfect.  Everyone was raging.  It was hot and gross.  But it was great.  A little heavy on "Seemless" stuff for my taste, and I would have been more stoked to hear more "Ignaurus" material, but they did offer up "The Other" and "I'll Be Damned" from the "Creepy Eepy".  So it evened out.
A lot of people don't get Into Another and I totally understand it.  They came around at a time when hardcore sounded chuggy, metallic, and violent.  They played music that was progressive, weird, a bit psychedelic, and with vocals out of a fantasy metal band..  yet still heavy.  It was such a strange thing to see in the time they came around and that was the appeal. It's definitely a time and place thing for sure.  There's no denying how musically talented they are, or that they could get really heavy when they wanted to.  And now that I'm far more musically cultured their sound, to me, is like a slow version of "Quickness"-era Bad Brains.  You can tell Richie Birkenhead looks to HR for vocal inspiration, as opposed to Dio.  It's an easy mistake.  Despite all this their music sounds better than ever to me and they still play it incredibly well.


Well after 2AM  and a couple transfers on the subway to Port Authority, and I was still wide awake.  3AM and resting on a bench at a subway stop beneath the Port Authority, waiting for them to open at 5:30 AM.  Somehow it was not as much of a pain in the ass as I imagined.  7AM and I'm on the bus home.  Escape from NYC.  Barely any sleep and I got back an hour late for work so I just went straight there.  These are the stupid plans I make for myself.  But it makes for a good story.

* PS- I took none of these photos or video.  Just putting that out there.