Yo!  So this will probably be my last batch of reviews for the year, aside from an end-of-year favorites list type thing.  Going into the new year I'm not sure if I'll continue to do reviews like this.  I'm frankly getting a bit tired of it...  even though I greatly enjoy listening to new music all the time.  I'm thinking of doing a bit more reflective stuff, like old show flyers and write up's on fun, old wild shit, as well as current travels/shows (which I have been doing).  We shall see.
In the meantime I'd like to think there was some pretty excellent music released this year, especially in the last month or two.  So here ya go. 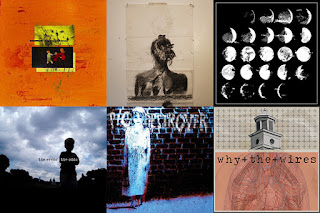 BASEMENT, “Colormekindness”
There’s been this group of bands that have released post-hardcore/90’s rock styled records this year and have totally nailed it.  A lot of bands go for that vibe, but don’t quite get it.  But records from Title Fight, Gypsy, and Basement sound as if they all were yanked out of the time stream where they all were about to open for Seaweed in 1994 and ended up here.  And for a guy in his mid-30’s, and lived through that time (and that era consequently producing some of the most influential music upon my young, impressionable mind), this stuff is pretty great.  It’s been a good year for music for me.  Basement hail from the UK, put out a record before this that didn’t quite sound like “Colomekindness”, and this is also their swansong as I believe they split up upon it’s release.  Well, it’s a heckuva way to go out.  Many of these song focus heavily on layered melodies, some pop-punk leanings, as well as a taste of classic Sunny Day Real Estate (as shown most clearly on my favorite song of the record, “Covet”).  It’s a nice surprise to hear another band that is culling their influences from an era of music most groups can’t get an adequate grasp on, and showing them all how it’s done.  (Run For Cover)

“BEYOND THE MUSIC:  HOW PUNKS ARE SAVING THE WORLD WITH DIY ETHIC, SKILLS, AND VALUES”, by Joe Biel
This book takes many, many, many (that’s a lot of ‘manys’) interviews with all sorts of people who have grown up punk and taken what they’ve learned from being interested in that term and applied it to things they do currently.  For instance, the owners/operators of 1984 Printing Press, or the founder of AK Press publishing- they took things they picked up on being involved in punk and applied to how they run their business now.  There’s a guy who got into vegan straight edge through the hardcore scene and now runs a company that installs biofuel systems in cars.  Then you have Will Meek, who runs his own psychology practice; Brea Grant, a television actress who grew up going to punk shows.  I’d say there are way too many people interviewed here who reside within the writing/publishing spectrum of things and it’s a bit unnecessary to get a number of similar stories out of them.  Also, some of these interviews tend to go on quite long (Richard the roadie more or less details every nuance of his punk upbringing down to what he had for dinner two days ago) and could use some serious editing.  Like, why do separate interviews for both owners of a printing press, or interview AK Press twice?  I get the intention of this book:  people get into punk, they take those ideas beyond mere spectator of a show, or fanzine writer, or dude in a band and make an impact upon society with something interesting.  It’s a good premise and a number of these interviews certainly are interesting to read through, but some of it goes on a bit long and gets a bit redundant.  (Cantankerous Titles)

CERCE, 7”
I’m pretty stoked on what this band is bringing because they bring it in such as ferocious manner.  Between lots of amps and cabs they blast through several songs in a few minutes.  Fast, pissed as anything with snotty/screechy vocals and done in a way that makes this very young band deliver their craft in a way that suggests a much more seasoned band.  Immediate comparisons could be made to Punch (really fast, two-step breakdown, screeched/screamed female vocals) but Cerce has their foot ever-so-slightly in a metallic realm, or to Code Orange Kids (same level of off-the-wall pissed/vicious rage), but Cerce actually writes a song with parts that reasonably go into one another.  So that might give some idea of where they are at.  I’m a little bummed there was no lyric sheet with this record, and that the recording doesn’t quite do justice to how massive they sound live.  But other than that this is a quality release and I hope to see more rage from them in the near future.  (Solidarity/It’s a Trap)

CONVERGE, “All That We Love We Leave Behind”
I’m pretty late to the game on this one because who, this year, has not actually heard this record?  Converge is sort of a no-brainer because most everyone interested in  heavy/punk music knows who they are and knows what they’re getting, even though the band is pretty good at making a killer record every single time.  But I’m not one of those people who worship at the alter, or freak out over what weird vinyl variant (or how many) I can pre-order.  Though I certainly do like Converge and respect the fact that they always release something respectable, put a lot of time and effort into every detail, put on a really good show, and run their band on a great DIY model and still play to sold out rooms all over the world.  Kudos to them for being a band that consistently makes music the majority of people would cower in fear from, yet by all accounts would be considered quite successful.  That all being said, I enjoy this record. I still have no idea how people actually sing along to Jacob’s unhinged yelping, but that’s besides the point.  I’m particularly swayed by the ultra-heavy steamroller of “Shame In the Way” (which could have been an out take from Cave-In’s, “Until your Heart Stops”), equally as I am by the blasting speed of “Tresspasses”, or the ass-kicking death rock vibe of “Vicious Muse”.  There are plenty more songs on here, all with their own vibe.  Some are wilder, faster, or moodier, but those three are my favorites I think.  I think my only real gripe with this release is that it seems most of their records will have one song that, in the span of less than 2 minutes, will have an incredibly fast first half followed by some insanely heavy breakdown, a la “Axe To Fall” or “Concubine”, or even “Forsaken”.  Not quite present here.  But hey, who am I to complain?  This is a great release for them.  I dig it.  (Epitaph/Deathwish)

EVENS, THE, “The Odds”
It has been quite a long time since Ian McKaye and Amy Farina have churned out a record from their collective project known as the Evens.  Part of that may have had to do with starting a family and raising a youngster, but that’s just a guess.  Still, the wait has been worth it as the duo once again presents an albums worth of stripped down songs that, while only employing a baritone guitar, drums, and both their voices, gives the listener so much to proverbially chew on.  The time has been put into their craft in such an interesting manner that I just want to dissect each song, lyric, and sound on this record.  When two people have such an extraordinary (and quality) catalog of music under both their belts the minutia of how they create new things together is fascinating to behold.  Amy not only has a soulful, and slightly sinister, voice, but is one of the more creative drummers I’ve witnessed.  Her off-time patterns that fall out of place and then lock into step once the vocals kick in to find the rhythm is incredibly clever, just as much as the straightforward thump that drives “This Other Thing” is direct and driving in it’s approach.  McKaye once again employs the range of his baritone guitar to get low bass tones, as well as the melody of guitar and uses both to find wonderful harmonies that work well with both their voices.  His lyrical ponderings on such songs as “Let’s Get Well” are wonderfully written (actually, I’m not sure who writes the lyrics- I imagine it’s collaborative- but since he sings this one I’ll attribute it to him), and put together well.  While many might feel some skepticism when listening to The Evens simply because it does not ‘rock’ as hard as the members previous outfits they are sadly mistaken.  This has just as much weight and depth as anything they have done in the past.  And it certainly makes me think, and inspires me to be just as creative in my own endeavors.  Any creative type should hope to have this many ideas and inspiration after 30 years of making music.  (Dischord)

PIG DESTROYER, “Book Burner”
Man, you wait five years and then Pig Destroyer fucks your shit up with another LP aiming to ruin your day.  Relentless is an apt term for their delivery, like all their material.  Most songs come at you so fast and then rip you apart in the space of under two minutes.  I love it.  Some friends had critiques of this record saying it doesn’t rage as much as their previous records.  So after getting my face replaced with lava once I got through this record I put on a couple of the old ones for comparisons.  Indeed, there are subtle differences.  New drummer Adam Jarvis (of Misery Index) has a tighter and more technical style than previous blast beat magician Brian Harvey, whose style was still technical, but a little more loose- adding to the unhinged grindcore/violence that Pig Destroyer were so awesome at.  Jarvis still lays down some great stuff and this record still does slay.  The opening track, “The American’s Head”, the title track, and “The Diplomat” all do a fine job of opening with salvos of blasting grind, followed by sharp attacks of surprise breakdowns and JR Hayes wretched screams amongst it all.  Another quality record from a heckuva band.  (Relapse)

WHY THE WIRES, “All These Dead Astronauts”
Ithaca’s Why the Wires unleash their third LP in about as many years.  For a bunch of dads who make this band a very part time thing they sure are prolific.  This record only continues what they have been doing and improves upon the quality.  They are clearly a somewhat less technical Sweep the Leg Johnny, though I fear that description does not help most hoping for an easy description.  Well, think guys who really like stuff like Hot Snakes and other rocking garage punk, but can’t help themselves to putting in some gnarly math rock parts, and various additional instrumentation such as saxophone and accordion to many of the songs.  This comes in a nice gatefold cover and heavy vinyl.  How do they afford to do stuff like this when they rarely play out?  The passion is in the project I suppose, and if you ever get a chance to see them play it’s definitely in the performance as well.  (Rorschach Records)
Posted by Hex Records at 5:02 PM

Sounds like a very good idea. You will have heaps of subscriber for the ones do that.
Burun Estetiği