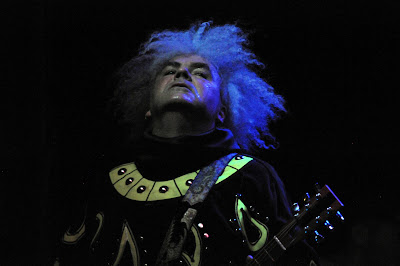 * all photos by Enrique Blanco
While I’ve seen the Melvins several times at this point, with varying lineups, I can’t really argue against going out to see them when they play three blocks from your house.  So I set aside my regular exhilarating Friday night of eating snacks, playing with cats, and farting into my office chair to take the stroll down Westcott Street and getting my ears blown off by King Buzzo and company.
I waited outside where I began my night long stalking of Dave Curran, tour manager for Melvins (not all that important) and bass player for Unsane (really fucking important).  I bet he carries around a sealed copy of “Scattered, Smothered, and Covered” LP just to shove in the face’s of grubby fanboys such as myself, and so help me, I should probably take it.
What actually transpired was that I eventually wandered in, looked at all the awesome drawings that Brian Walsby brought on the road (he probably drew half of them during sound check), and the other random wildness of the Melvins merch table, and then patiently waited for the show to begin.
Le Butcherettes kicked things off.  I couldn’t tell if they were more style than substance because the vocalist spoke only in Spanish between songs, and I assume, during as well.  The three members decked out in bright red outfits with vocalist Teri Gender Bender going for a Lydia Dietz marriage scene get up that must have made playing guitar (when not playing keyboard) quite the difficult task.  Her stage antics struck a bizarre tone that was part robot-on-the-fritz, part early Karen O. spectacle.  Some of it felt a bit forced, and weird for weird’s sake.  Musically, however, they began strong with fairly straightforward riffy rock that centered on bass and drums, and monster mash keyboards.  I guess, overall, they were sort of a mixed bag. 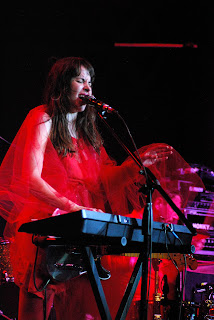 The Melvins didn’t take long to get rolling.  Every time I have seen them they have always been quick to just get up and start doing their thing right after the opening act.  Heck, sometimes the opening act was in the band and there was no change over (back when the Big Business duo were playing in the band…  are they still unofficially?).  but for the last couple years Jeff Pinkus from the Butthole Surfers has been on bass duty and does an adequate job of holding it down.  While I have never been a diehard Melvins fan (I own only three of their records…  for shame, I know) I recognized this set as being fairly similar to what they played when I saw them last year.  But in consulting with my man who took the pictures, who is a diehard Melvins fan, he offered that they did indeed draw from their vast catalog, and mixed it up across all eras of the band (nothing off of “Senile Animal” though). 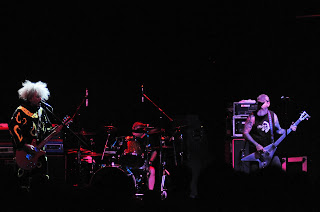 Opening with the sludgy sledgehammer of “Hag Me” the band took their time warming up the crowd before coasting into some more recent stuff before tossing out a Butthole Surfers cover, and then going into some older material from “Bullhead”, “Stoner Witch”, and even “You’re Blessened”, off of “Bullhead”.  I was exceptionally stoked when they launched into a lengthy cover of “Youth Of America” by The Wipers that spiraled into some chaotic jam before they jumped right into “The Bit”.  They closed out with “Night Goat” followed by, “Fascists Eat Donuts”- a song they did with Teri from Le Butcherettes accompanying.  I had to look this up, as it’s actually a cover from a band called the Pop-O-Pies.  No idea.  But it’s catchy as hell and I’ve been thinking about it since with it’s repeated chorus of “Make those donuts with extra grease/ This batch for the chief of police!”  The band just dragged it out, slower, and slower, as they all sang the chorus again and again, slower and weirder until it just felt like one big weird melting of time.  It’s like the audio equivalent of what I’m assuming bad drugs feel like. 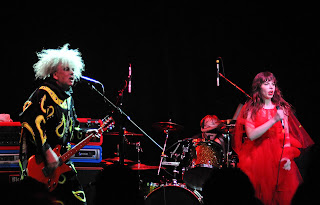 As the show ended I saw Dave Curran behind the soundboard and approached him like a weirdo and said Unsane is one of my favorite bands ever.  We talked a bit about Pigs, and he had no visible copy of that one record I’m missing so I let him live.  Next time.  I’ll find it eventually.
Posted by Hex Records at 9:43 AM

Hey, that's kinda similar to my review of a show those two did in Boston!

(Except for certain amount of hatemail that flew my way)