FIRST BATCH OF REVIEWS FOR THE YEAR!

Oh, is it 2018 already?  Oh, it's already nearly March you say?  No kidding.  How about that.  For all three of you who are avid readers of this stuff you will notice I have not added anything since late December.  It's not like I've been one bit lazy (however, I did consider the thought of just not doing reviews anymore).  I have been getting settled in my new home in Portland, OR, getting acquainted with a new job that takes a good deal of time, eating waaaay too much awesome vegan food, seeing an endless stream of awesome bands as they pass through town, and learning how to do letterpressing (if you check the Hex webstore you'll currently see three separate poster projects that I am selling HERE ).  And, as always, working to get the records from the label out to anyone who wants them.  So your boy keeps active, OK?
However, the year is already ripe with great music and it's not even Spring yet.
ALSO, now that I'm, like, a full-on resident out here, I thought it would be apt to feature a couple local bands who just released great new records and get out-of-towners interested in them.
Finally, I'm trying a new feature with these reviews by adding a song from each record reviewed so you can listen and read at the same time!  I know, super futuristic.  Give it a try. 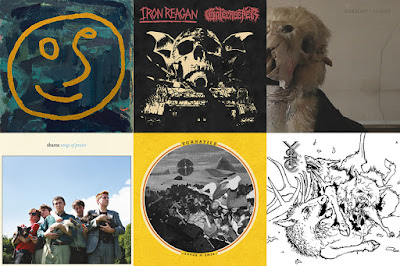